Videos show a person believed to be the suspect pointing assault rifles at pedestrians from a room in The Sofia Hotel on West Broadway in downtown San Diego. 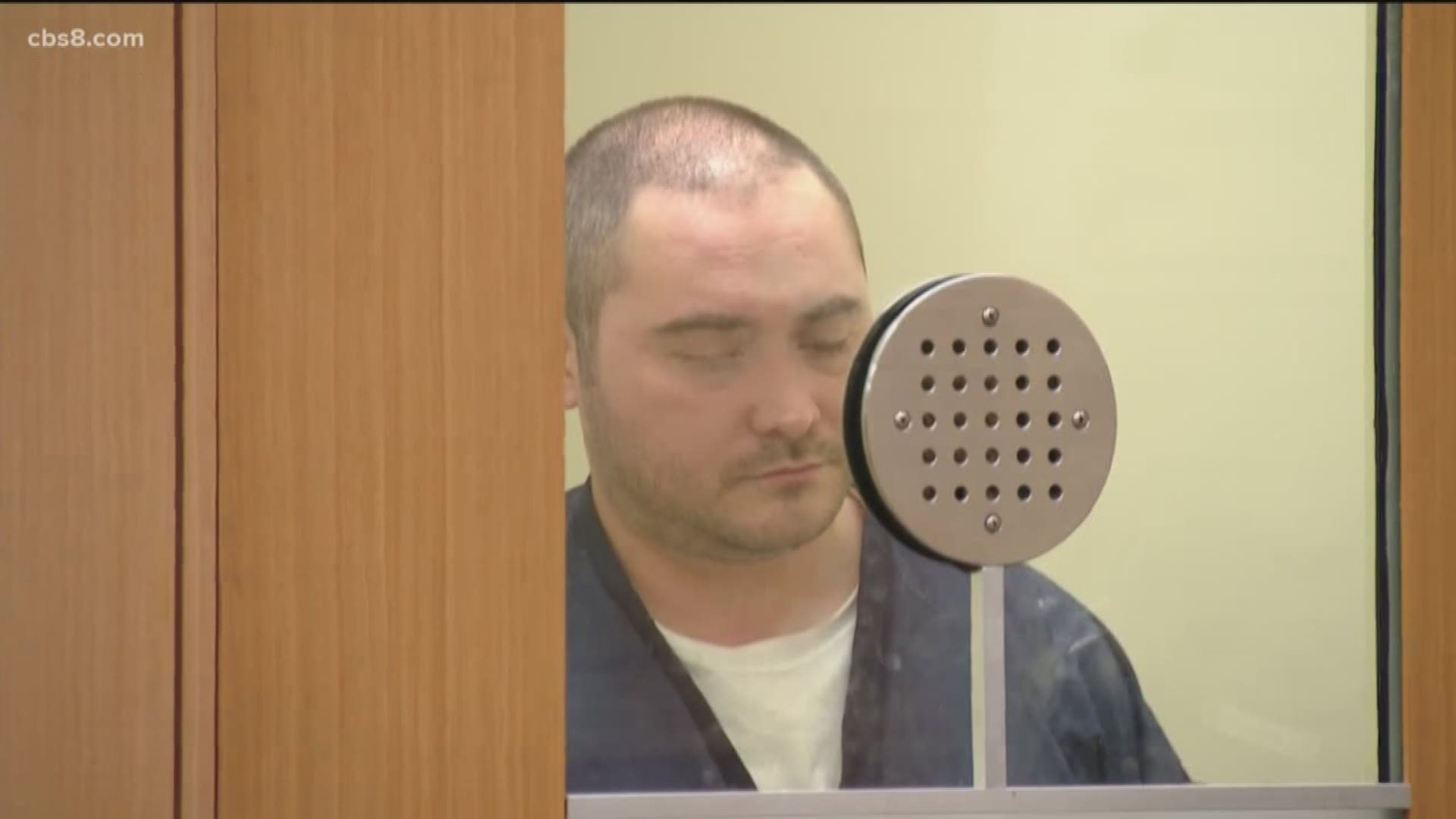 SAN DIEGO — A Spring Valley man who allegedly posted YouTube videos showing him loading and aiming guns out a window at people walking by his downtown San Diego hotel room pleaded not guilty on Monday around 2:45 p.m.

You can watch the arraignment here:

Steve Homoki, 30, was arrested without incident on Thursday on suspicion of possession of an assault weapon, possession of a high capacity magazine and child endangerment, according to the San Diego Police Department.

The online videos that spurred the investigation featured footage of the suspect pointing assault rifles at pedestrians from a room in The Sofia Hotel on West Broadway in downtown San Diego, according to police.

According to a search warrant issued on Dec. 5, Homoki used his Expedia account to book room #335 at the hotel on March 22. He checked in that day and checked out on the 23rd.

In a pair of YouTube videos posted Sept. 17 and 18 -- apparently filmed with a body camera -- guns, high-capacity magazines and hundreds of bullets can be seen strewn around the hotel room.

"Then, to memorialize what he was about to do, he strapped on video recording equipment, to film what only looks like a simulation of a mass shooting," said the prosecution on Monday.

News 8 sat down with Homoki for a jailhouse interview over the weekend, who says the YouTube videos were supposed be a "mini art project":

The camera-wearer crawls on the floor, grabs cartridges and at one point a round is shown being loaded into an automatic handgun, which is then pointed out a window at people walking near the downtown federal courthouse.

One of the videos shows an apparently unloaded assault rifle being retrieved from a couch and pointed out the window. After the suspect pulls the trigger, to no effect, a voice says, "One down, more to go."

In the YouTube comments section on his video page, Homoki, using the alias "Stephen Anderson," allegedly wrote, "Everything is fabricated for entertainment, and none of these are intended for any audience."

"This is a private video," the message continues. "Shall not be published online for anyone to view, and this is satire and not in any way shape or form to be taken seriously. Should children with toy guns deserve to get shot?"

According to search warrant, on Nov. 30, someone anonymously reported Homoki's YouTube channel to the FBI. The unknown person told investigators that they know "Steve Anderson" (Homoki's alias) through a gaming website called Discord App.

The anonymous person told investigators that "Anderson" was becoming more unstable over time.

"Red flags and warrants were going to come sooner or later and he (Komoki) had a plan in place," the unknown person said in the tip.

"When they get to the house, they find a very dangerous situation," said the prosecutor.

Police seized multiple registered firearms, including a high-capacity magazine and an assault weapon from the suspect's Spring Valley home when they arrested him Thursday. According to the prosecution, police found 14 guns in Homoki's home, three of which were illegally modified. According to the search warrant, all of the registered guns were purchased between Feb. 2018 and May 2019.

"Many of them are [were] laying around loaded, unsecured, and there are at least six high capacity magazines," said the prosecution.

Homoki was booked into San Diego Central Jail on suspicion of weapons offenses and willful cruelty to a child. According to the criminal complaint, Homoki is facing three counts of child abuse and three counts of unlawful possession of an assault weapon.

According to the prosecution, Homoki is facing child abuse charges because the weapons police allegedly found in his Spring Valley home were easy for a child to get their hands on.

Homoki's defense lawyer says his client has no criminal history. According to the search warrant, police previously investigated claims that Homoki was stalking an ex-girlfriend back in 2017 and was embezzling money from his brother in July of this year. Homoki was only listed as a suspect in those two cases and has not been convicted of either.

Homoki is not facing charges for the YouTube videos themselves.

"The pretending to commit a crime is not a crime in and of itself," said the prosecutor.

A judge set Homoki's bail at $1 million. His next court date is scheduled for Dec. 18.