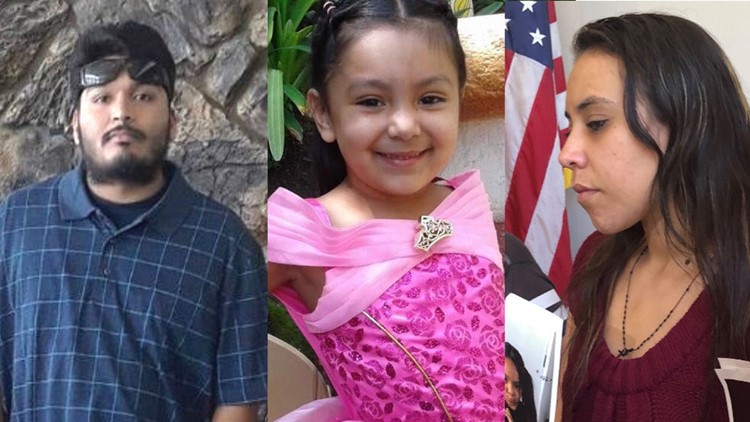 OCEANSIDE, Calif. — The mother of a 7-year-old girl, found stabbed to death last week in Oceanside, alleged in family court filings a history of abuse by the child’s father.

Pedro Araujo is charged with murdering his daughter, Mariah Araujo, by stabbing her 10 times inside their Oceanside home.

In an August 2017 family court declaration, the mother, Vivian Arzola, described in graphic detail a 2016 attack at the hands of her former boyfriend and father of their daughters:

“Pedro suddenly grabbed me by my hair, and dragged me into the house in front of our daughters, before throwing me inside one of the bedrooms.  He tied my hands and feet together stuffed a sock in my mouth to muffle my screaming.  I could hear my daughters crying and screaming in the other room obviously terrified by what they saw their father doing to me.  I remained in that room for about 8 hours until Pedro’s mother heard me screaming and was unable to untie me.  I did not call the police because Pedro had told me he would kill me if I called the police.”

Araujo, 27, is facing up to 26 years in prison if convicted of the charges of murder, assault on a child and child cruelty.  He pleaded not guilty on Tuesday in Vista court.

RELATED: Oceanside father charged with the murder of his 7-year-old daughter

Police say Araujo had legal custody of his two daughters, Mariah and her 6-year-old sister, at the time of the murder.

Prosecutors allege the younger daughter was in an adjacent room when Mariah was stabbed to death inside a bathroom.

The family court case began in January 2017 when the father filed a petition in Vista court requesting custody of the two girls.

“I want custody for my two daughters. I don’t feel there (sic) mom is raising them right,” the father’s court declaration stated.

“There’s all kinds of people that go in and out of her house… negative people that could be bad influence to them,” Araujo wrote.

Court records show both the mother and father have misdemeanor criminal histories dating back several years.

“Pedro and I have been broken up since 2013,” according to the mother’s declaration. The records state the two children were born in 2012 and 2013.

The mother’s family court declaration describes another incident in August 2017:

“Pedro came to the house, uninvited at about 10 p.m.  He was visibly drunk, slurring his words and stumbling around while accusing me of seeing other men. He got in my face, trying to grab my phone from out of my hand… His actions woke up my daughter Mariah, who came out and said, ‘Don’t hit my mommy.’”

The children lived with their father and his mother at a home in the 3500 block of Las Vegas Drive in Oceanside when the girl’s alleged murder took place.

Despite the history of abuse alleged in family court, the judge in the case awarded legal and physical custody to Araujo in late 2017, after the mother failed to appear at court hearings.

The mother’s request for a restraining order against Araujo also was dismissed, records show, when she failed to appear for a hearing on the matter in September 2017.

The records indicate the mother, Arzola, was permitted a “reasonable right of parenting time (visitation),” according to the case filings.