The Rev. Shane Harris says the trial, which begins Monday, is about justice and permanent change. 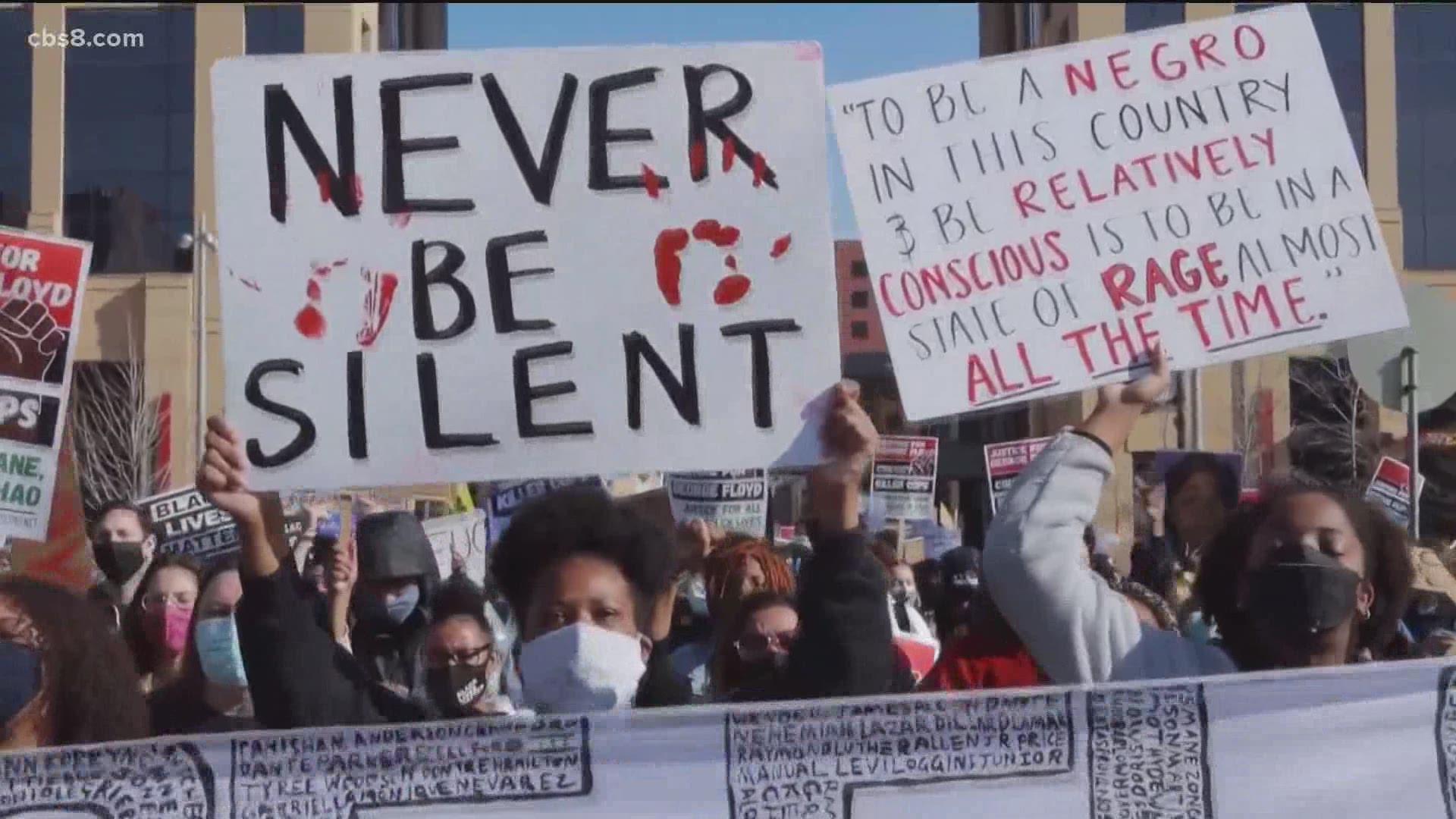 SAN DIEGO — 10 months after George Floyd's death, the former Minneapolis police officer accused of killing him will head to trial Monday in what many are calling a landmark case.

According to The Rev. Shane Harris, the trial is not only about justice, but permanent change.

"I think that it means a lot in regard to policing in this country, the history of racial injustice and inequity that has plagued the African American community for over 400 years. It's a very critical moment and it's a critical case that will decide sort of how we will deal with racial injustice in the future moving forward,” said Harris.

He said the injustice he’s referring to could not have been clearer as seen in cell phone video captured last May, showing George Floyd on the ground handcuffed, after being arrested outside a Minneapolis store for allegedly trying to use a counterfeit bill.

The officer holding his knee down on Floyd's neck is Derek Chauvin.

"Eight minutes and 46 seconds drew the humanity out of people from all backgrounds.  I think people that were white, Black, Latino and Asian sitting there watching on tv this man begging and pleading for his life, they saw the humanity in that, and I think that is what's different now.  Before it was you saw this, you saw this. America was forced to sit down and watch it. This was the first time that happened because of the pandemic," said Rev. Harris.

Since then, Harris said real change has emerged.

Law enforcement agencies including both the San Diego Police and Sheriff's Departments have stopped using the carotid restraint.

Statues and names symbolizing racial inequality were either removed or replaced.

He's pushing for the Senate to pass the George Floyd Justice and Policing Act of 2021, which among other things, would enact a carotid restraint ban at the federal level, and allow the justice department to serve subpoenas at police departments throughout the country.

"It really takes a look at decreasing this immunity, this qualified immunity that officers have had for so long that protects them," said Harris.

Rev. Harris, who serves as president of the People's Association of Justice Advocates, believes Chauvin's trial will play a big role in that.

Six men and nine women have been chosen to serve on the jury.

Of the 15 jurors, which includes alternates, nine are white, four are black and two are mixed race.

"You can't assume that because there's a diverse jury that the outcome is going to be the outcome you think and you hope for," said Rev. Harris.

Like so many others, Harris will be watching closely.

As for Floyd's family, though he hasn't been in contact with them for several months, he sympathizes with what they're likely going through.

"They're probably very overwhelmed and stressed in regards to this case because these cases often are never called at the beginning. They're always called at the end and it's a process to get to the end and now you have to relive all this trauma because you're gonna have to go through the trial reliving it, so we're praying for them and hoping for the best outcome that will bring some level of closure."

That outcome, Rev. Harris hopes, is a guilty verdict.

If not, he cautions the outrage that could erupt, instead encouraging people to express it in more peaceful ways.

"We need to channel our anger, our frustration and our passion into substantial changes that affect communities."

The trial is expected to last several weeks.

The other officers who were there when George Floyd died will be tried for their roles in case this summer.

WATCH: Protests across the nationwide over the death of George Floyd