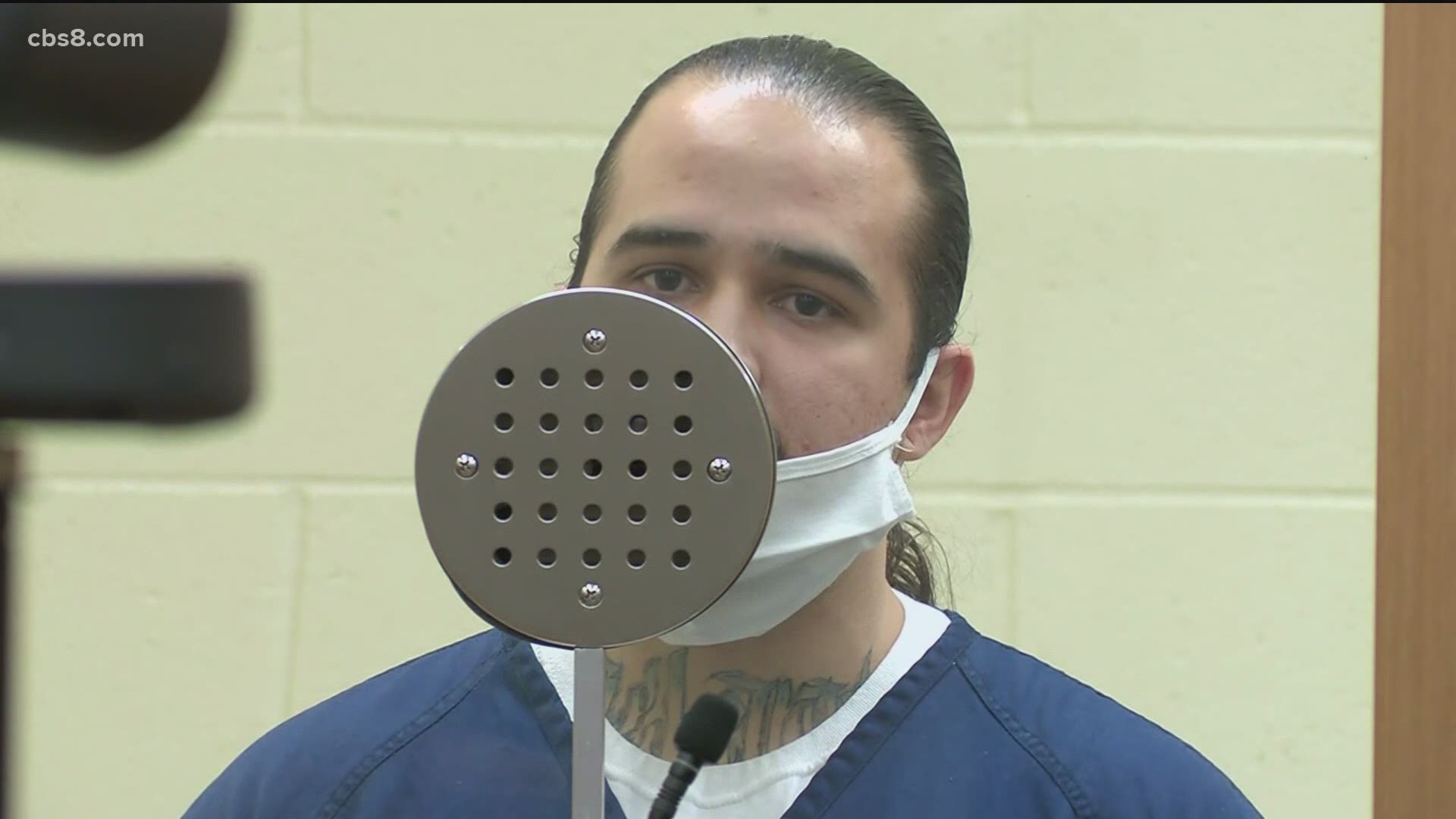 SAN DIEGO — Two brothers involved in the fatal shooting of a Navy sailor who pulled over on a freeway ramp in San Diego to help a seemingly stranded motorist were sentenced Monday to state prison terms.

Adams' mother was in court virtually. She had the district attorney read a letter she wrote to the brothers but she also said a few words.

"I just wish I could hold my son again," said Barbara Abrams. "I am so emotional right now. As a mother it hurts. It hurts."

Adams was driving with his girlfriend at around 2 a.m. when he stopped to assist a disabled vehicle on the side of the freeway, which was actually a car that had sustained flat tires in a shootout from a bungled vehicle burglary earlier that night. Deja Harris virtually addressed the court during the Acuna's sentencing hearing on Monday.

"You guys are cowards. All he wanted to do was help you and he did not deserve what happened to him. You guys do not serve to live your life, you deserve to be left behind bars for the rest of your lives," said Harris.

The disabled car was occupied by the Acuna brothers, as well as Harvey Liberato, 26; and Susana Galvan, 40.

Prosecutors say the defendants took part in burglarizing a vehicle parked outside a Mount Hope home earlier that night and got into a shootout with one of the home's residents, resulting in at least one of the tires on Acuna's car being shot out.

Forced to pull over due to the flat tires, Acuna and the others saw Adams stop on the side of the freeway.

As Adams exited his car, Edson Acuna shot Adams in the chest.

His attorney, Daniel Cohen, said his client mistakenly believed Adams was the person they had engaged in a shootout with earlier in the night.

"He was acting from a misguided, mistaken idea of self-defense," Cohen said at Acuna's sentencing hearing.

Vasel alleged Acuna shot Adams to hide the fact that he had just fled a crime scene and was stranded with a car full of stolen property. The prosecutor said Adams and the homeowner who had previously shot at them did not resemble one another.

Edson was convicted by a jury earlier this year of first-degree murder, robbery, burglary, various firearm counts and a special-circumstance allegation of committing the murder in the commission of a burglary. During his sentencing he addressed the court.

"I want to say I'm truly sorry for the loss of your family member," said Edson Acuna. "During the course of this trial, the district attorney and the media have painted a picture of me as a monster, as a cold hearted villain, that is not true."

Following the shooting, Acuna's vehicle was found on the freeway about a half-mile from the shooting scene, with Brandon Acuna and Galvan arrested nearby.

Adams, a Brooklyn native, enlisted in the Navy in 2016. At the time of his death, he was working as a steel worker with Amphibious Construction Battalion 1 at Naval Amphibious Base Coronado.

In court, Vasel read a letter from Adams' mother, Barbara Abrams, who wrote that her son made her proud and seemed destined for great things when his life was cut short.

"All of Curtis' visions, plans and goals ended. Curtis' love of cars, travel, family, his friends, church, school and community ended with the violence, with the final gunshot from the barrel of a coward's gun," she wrote. "You must serve the rest of your life thinking about how you killed Curtis Adams, who stopped to help you."

San Diego County Superior Court Judge Charles G. Rogers said, "This world, on Oct. 27, 2018, lost a remarkable young man. His passing left a huge hole in the lives of so many good people ... But not only have those families, those people, lost somebody remarkable, so did this world. And this world, I think, was deprived of contributions that I know Mr. Adams was going to make."

Rogers said he hoped the defendants "reflect in the years to come on that magnitude of the loss that your actions caused."