Vandalism at Chula Vista church being investigated as a hate crime

Staff at South Bay United Pentecostal believes the vandalism may have to do with controversy over Drag Queen Storytime which their pastor has spoke out against.
Author: CBS News 8 Team, Brandon Lewis (Reporter)
Published: 1:52 PM PDT September 8, 2019
Updated: 7:50 AM PDT September 9, 2019

CHULA VISTA, Calif. — A Chula Vista pastor reported vandalism at his church Sunday and police confirmed the incident is being investigated as a hate crime. Executive pastor Amado Huizar said he reported spray painted messages on the outer walls of South Bay United Pentecostal Church to Chula Vista police and took pictures of the messages before covering them.

"I was shocked. Very saddened," said Huizar of discovering the graffiti. "It was like a kick to the gut when people are about to come to church."

Huizar says there is surveillance footage of the incident from around 3 a.m. Sunday morning. The video has been given to police but is not being shared with the media, according to Huizar.

Huizar said the footage shows two white males in their mid 20s pull up in a sedan. The two are seen walking by the church and then they return to the vehicle 15 minutes later. It's believed in that time they spray painted the words "satan," "lucifer," and "king of hell" along with pentagram shapes and a message that included obscenities.

Huizar recently spoke out against Drag Queen Storytime planned for Sept. 10 at a Chula Vista library.

"It’s inappropriate to be introducing a drag queen at a story hour to kids that haven't even learned how to read,” said Huizar.

Staff at the church believes the vandalism may have something to do with the controversy but police say there is no indication of a correlation so far and that nothing obtained in their investigation as of Sunday afternoon shows it is related.

Police said the vandalism is being investigated as a hate crime because it happened at a religious facility. They said they are unaware of any other recent incidents at area churches.

Pastor Huizar said the church has a previously scheduled meeting slated for Monday with Chula Vista Mayor Mary Salas about the storytime and will now be talking to her about the vandalism as well.

"We plan on bringing this up and sharing how this event is causing more harm than good," Huizar said. "At least to have an opportunity to share viewpoints from the community and if this is for the benefit of Chula Vista."

He says ultimately meeting with the mayor is about opening dialogue ahead of Tuesday's planned storytime.

"We want to talk about that because the message on both sides is love and this of course is not love," Huizar said. "We will stand with that [and] have a conversation in love and peace and bring unity of the community together."

Dae Ellito with the South Bay Alliance which is involved with Drag Queen Storytime through a partnership with the city of Chula Vista and San Diego Pride issued the following statement on the vandalism:

"SBA stands against all such forms of vandalism. It has no place in any political dialogue. I sincerely hope it was not in response to their position on the storytime, but if it was, it is extremely inappropriate. I hope CVPD find the culprits."

See below for pictures of the spray painted messages. Note: The words in these pictures may be offensive to some viewers.

Vandalism at Chula Vista church being investigated as a hate crime 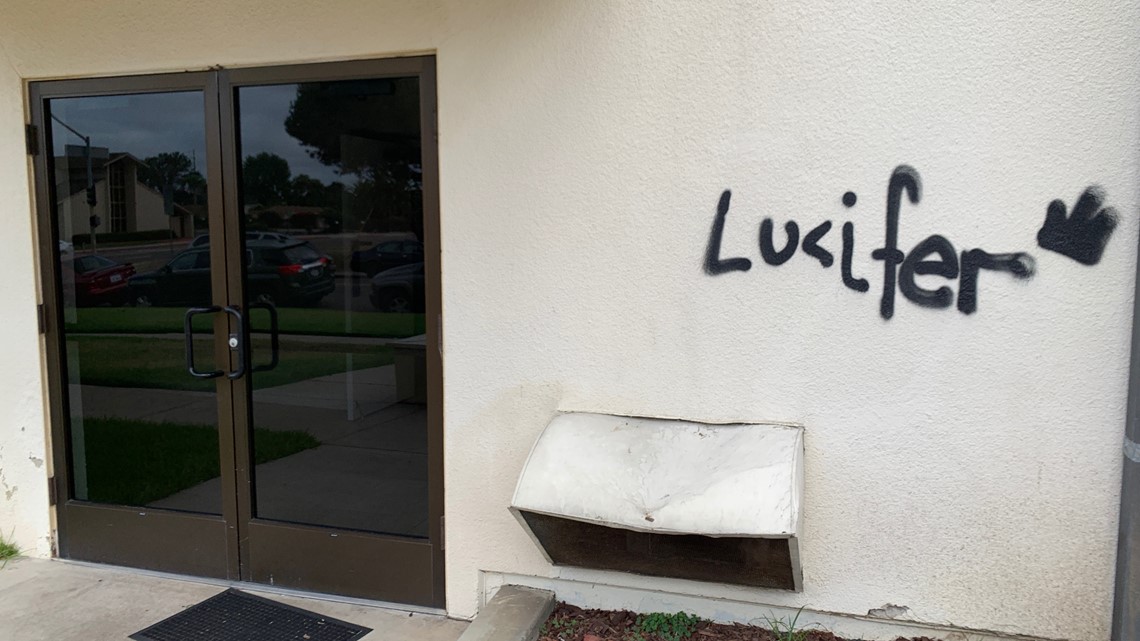