A San Diego DJ saw the commotion at SDPD headquarters and grabbed his cell phone. 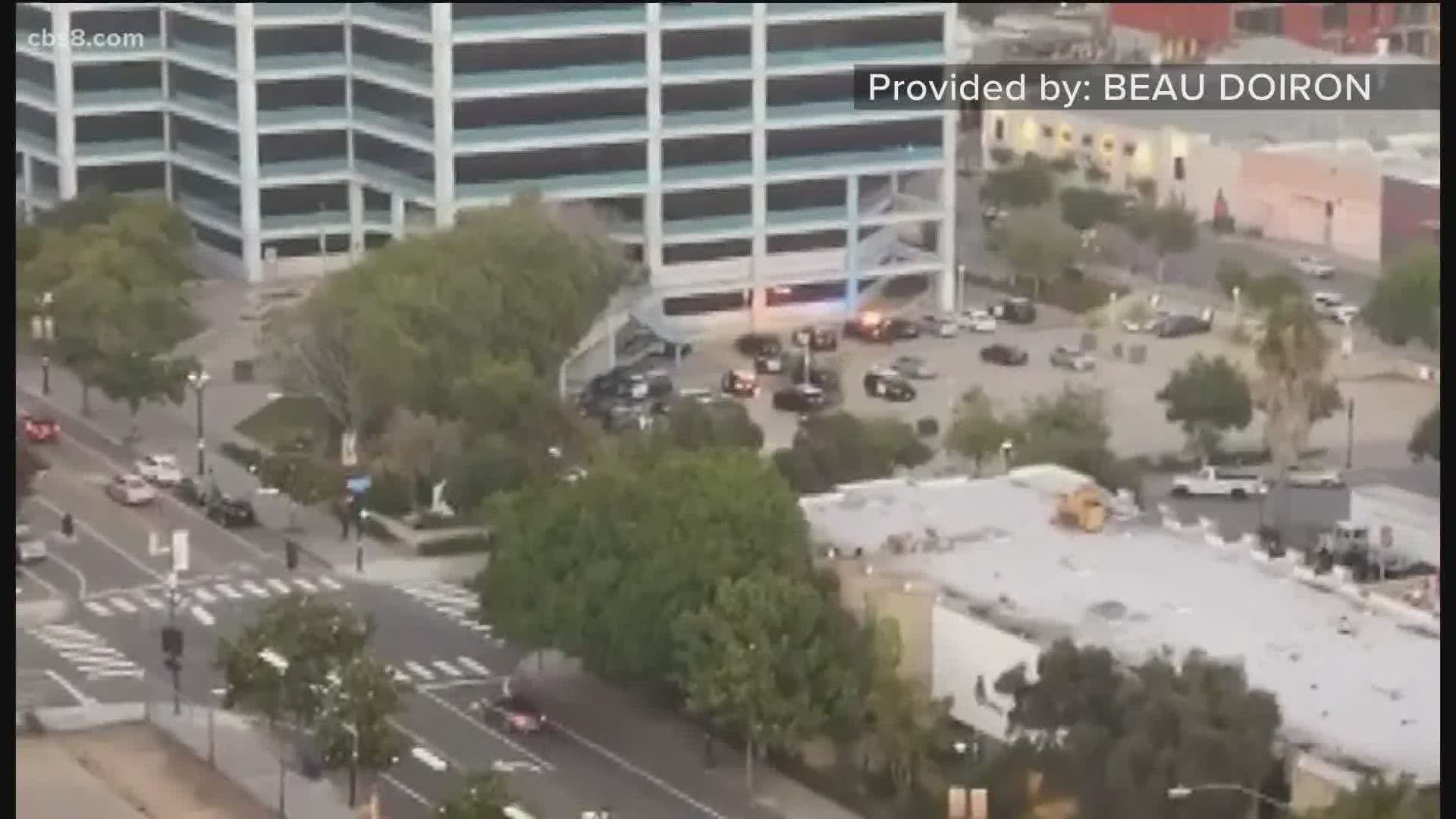 SAN DIEGO — The sound of sirens and the sight of San Diego Police vehicles racing toward their own headquarters led Beau Doiron to grab his cell phone Sunday night.

A minute and a half after Doiron started streaming video live on Facebook, he heard the gunshots.

Doiron works as a DJ and lives in Encinitas, but he's been quarantining in his girlfriend's downtown apartment for the past few months, which overlooks SDPD headquarters.

The incident started around 6:30 p.m. Sunday at the downtown Westgate Hotel, where security guards had used pepper spray to try to subdue a 25 -year-old Hispanic man, according to police.

Scanner radio traffic from a SDPD officer at the hotel scene described what was happening.

“He's now taken off his shirt and his hat.  He's in the lobby.  He picked up this hand sanitizer stand made out of metal,” the unidentified officer radioed into dispatchers.

Officers transported the man to SDPD headquarters, where he apparently was left unattended in a vehicle.  The man was able to slip out of his handcuffs and smash his way into the rear cargo area of the police SUV.  He then tore into an officer’s backpack and grabbed a gun, police said.

In a news release, SDPD said the suspect shot at least one round.  Three SDPD officers returned fire, hitting the suspect in the torso.  Police deployed a canine to subdue him and he was transported to a hospital with non-life-threatening injuries.

“It was really rough and stressful to watch in real time, and I'm really happy to hear that San Diego Police officers are all safe after a very stressful and tense night,” said Doiron, the man who shot the Facebook video.

Live video from San Diego police station with possible active shooter inside the building. We have no idea what what was happening, just jumped on and started recording. 1:40 into the video you can hear what sounds like 3 gunshots.

The shooting victim is expected to survive but SDPD has not identified him, pending notification of his relatives.

The San Diego chapter of the NAACP issued a news release on Monday calling for a federal investigation into SDPD policies and practices related to its handing of the incident.  The group wants to know why the suspect was left unsupervised in a vehicle and why the backup weapon was accessible in the back of the police vehicle.

SDPD issued a statement that said, in part:

"The names of the officers involved in this incident are not being released at this time, but they have been with the department for 8 years, 6 years and 10 months, respectively.

The investigation and review process for an officer-involved shooting is extremely thorough. When the Homicide Unit completes their investigation, it will be reviewed by the San Diego County District Attorney’s Office to determine if the officers bear any criminal liability for their actions. The Internal Affairs Unit will conduct an investigation to determine if there were any policy violations, and the Shooting Review Board will evaluate the tactics used by the officers. The Community Review Board on Police Practices will conduct a review of the incident and provide any appropriate recommendations. The Federal Bureau of Investigations and the United States Attorney’s Office will also be monitoring the investigation."