"He had a profound effect on a lot of people. Through his tragedy, I have purpose in my life," said John Kouris who played football with DuBose at Notre Dame. 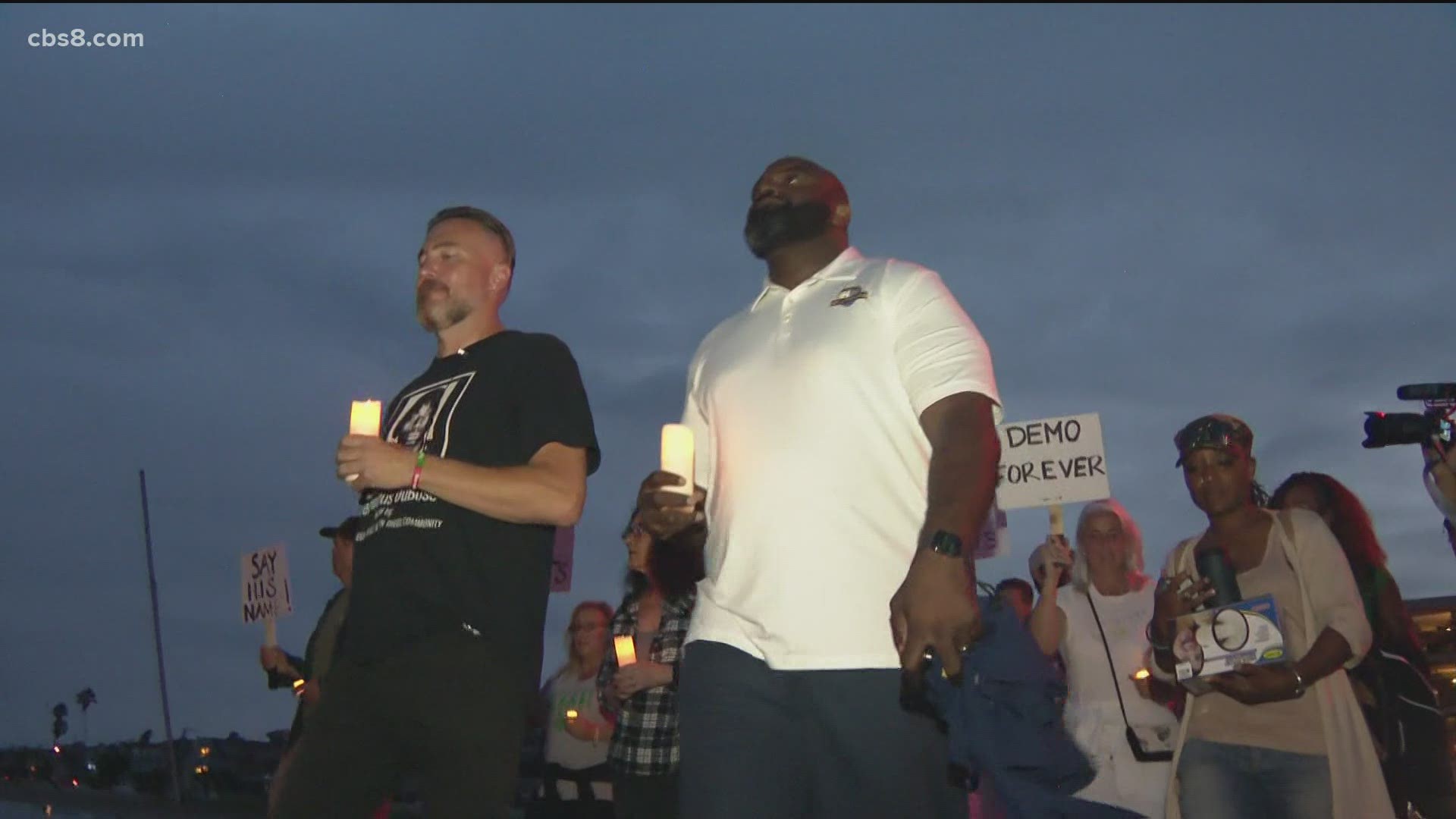 SAN DIEGO — A candlelight vigil for a former NFL player killed by San Diego Police Department officers over 20 years ago was held this weekend in the area where he was shot to death. Friends and family of Demetrius DuBose gathered at Little Sam’s Market in Mission Beach on Saturday night - the 22nd anniversary of his death.

John Kouris, who played football with DuBose at Notre Dame and is currently making a documentary on the life and death of his former teammate and friend, planned the vigil. Kouris said he's also gotten word of DuBose's life story being in some Ohio school textbooks.

"He had a profound effect on a lot of people. Through his tragedy, I have purpose in my life," said Kouris.

Kouris, who is the founder of Saturday Sun Productions, said he planned the vigil Saturday to honor his friend’s life and bring awareness “to the continued impact systemic racism is having in our communities."

"It was a lineage of unfortunate events, this one hits close to home," said a close friend of DuBose Oscar McBride.

The two also played together at Notre Dame for three years.

"He was always like a big brother," said McBride."I'm honored to have him bless my life."

DuBose was recently featured in an exhibit called the Say Their Names Memorial which opened in San Diego on July 10. The exhibit features 200 Black victims of racial injustice and police brutality. The installation is part of a traveling exhibit created by the San Diego African-American Museum of Fine Arts and is on display in Downtown San Diego through July 25.

The 28-year-old former linebacker was shot and killed by two SDPD officers on July 24, 1999, after DuBose fell asleep in an apartment neighboring the one he was staying in with his friend Randy West, according to a story in the San Diego Union-Tribune last year that recounted the events leading up to and after his death.

The tenant of the apartment Charles Flynn called police then went outside with his roommate, DuBose and West to talk things over. According to some reports, the incident was mostly over by the time police got to the scene.

Accounts of what happened after SDPD officers arrived vary by source.

Officers reportedly inquired about DuBose’s arrest records and when they eventually went to handcuff him a scuffle ensued in which DuBose was Maced. The U-T reported that DuBose got away and ran up an alley where officers tried to subdue him with nunchucks which he wrestled away from them.

Officers Timothy Keating and Robert Wills then opened fire shooting DuBose at least a dozen times, including five or six times in the back – the exact number of shots fired differ by source.

He was later pronounced dead at an area hospital.

Toxicology reports showed trace amounts of alcohol, cocaine and Ecstacy in DuBose’s system, while police said he acted as if he were on PCP. The officers also claimed they feared for their lives when they opened fire.

Witness accounts further complicated things with at least one saying DuBose's back was turned to officers at the time they started to shoot.

In November 1999, then-San Diego District Attorney Paul Pfingst concluded the shooting was justified. A report later that month by the FBI and U.S. Attorney’s Office in San Diego concluded there were no civil rights violations by officers in the DuBose case.

A wrongful death lawsuit was brought by DuBose’s mother against the City of San Diego.

Sydney Ethridge with the coalition for African American Organization spoke with News 8 about the case at the time the lawsuit was filed saying they wanted the FBI and Justice Department to do an independent review of the shooting to make sure police acted within proper police protocol when they shot the former NFL linebacker 12 times.

"We're not saying that it wasn't," he told News 8. "We want an outside agency to come in and take a look at it and tell us what the findings were."

“The deeply rooted institutional racism that cripples society as a whole has been swept under the rug for far too long,” DuBose's friend and filmmaker John Kouris said in a release about Saturday's vigil.

Kouris also said he wants the documentary he’s working on, “Demetrius DuBose, All American” to tell the story of DuBose’s life, not just his death.

A biography accompanying DuBose's picture and pillar in the "Say Their Names" memorial recounts his life from being raised by a single mother in Seattle, Washington, to playing various sports from childhood into high school where he excelled in football. He was one of the most recruited players out of Seattle, the bio states. DuBose ultimately chose Notre Dame where he double-majored in government and international relations, receiving a bachelor's degree in three-and-a-half years.

DuBose was picked in the second round of the 1993 NFL draft by the Tampa Bay Buccaneers where he played for their special teams unit. After his football career, he found a passion for beach volleyball, according to a website for the film, which is why he moved to San Diego.

"Another talented person's life span was cut short due to being black in America," the website reads in part.

A trailer for the film shows that it will include interviews with coaches and players who knew DuBose throughout his years playing football as well as media coverage and interviews related to his death.

“There’s more to Demetrius than what you see when you Google him,” Kouris told the U-T.

The vigil on Satruday was intended to take 13 minutes, to represent the 13 bullets that took the life of DuBose.