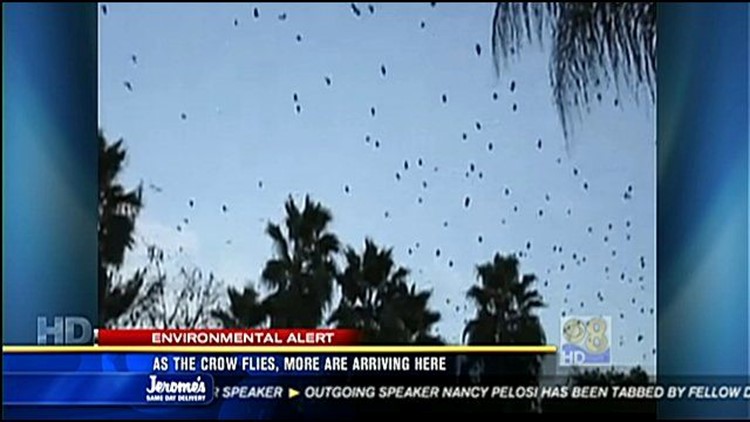 LA JOLLA (CBS 8) - A News 8 viewer says her yard is turning into a scene from Alfred Hitchcock's "The Birds", and she's not alone. Crows seem to be flocking to San Diego.

It's not quite as terrifying as the scene from the 1963 Alfred Hitchcok movie "The Birds", but Jan Davis says she's still spooked that the front lawn of her home in Lemon Grove is often filled with crows.

"What do they want? It's not like we just reseeded our lawn, they're just out there, making their noise," Davis said.

She says on some days, her yard is covered in crows.

"I was looking out the other day and it looked like a crow convention on my front yard, it was weird," she said.

The crows are catching the attention of many San Diegans who have posted videos on YouTube, from a murder of crows up in Escondido to a flock down in Bonita.

"What we've seen is an explosion over the last 40 years, and crows are often considered the smartest birds. They adapt very well and have come to learn that people are very sloppy eaters. This is heaven for crows," Philip Pryde of the Audubon Society of San Diego said.

Pryde says crows are not a direct threat to humans, but could affect other bird species.

"They will rob nests. They will eat anything, including the eggs of other birds. They can be a pest," he said.

"What do you guys want? Is there something I should know? Or should I run in my house and close the door?" she said.

Crows also happen to be susceptible to the West Nile virus. If you find a dead crow, you should notify San Diego County Vector Control by calling (888) 551-INFO.