Almost everyone is on social media these days and while it can be an outlet for good, comments can quickly turn ugly. 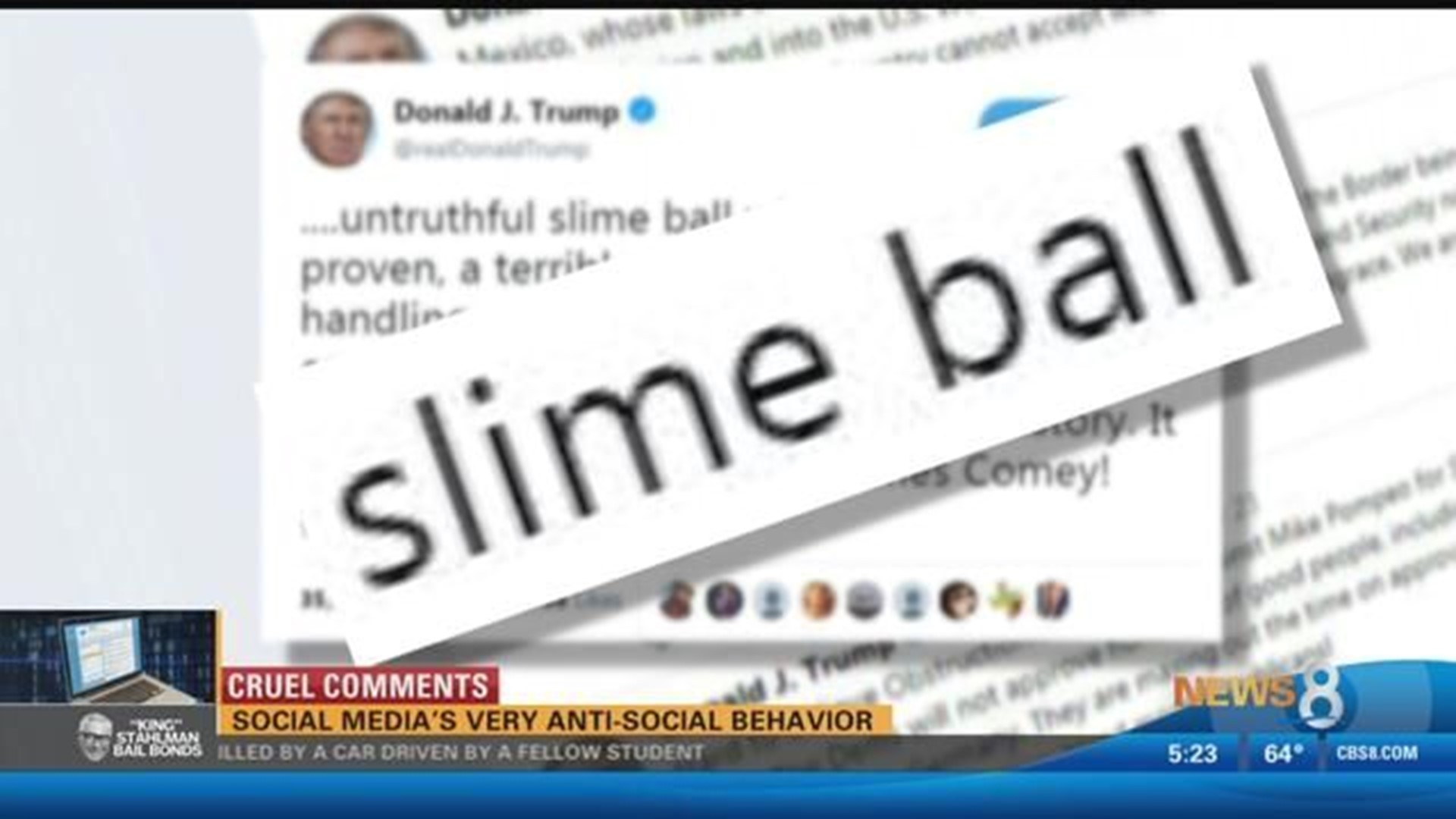 SAN DIEGO (NEWS 8) — Almost everyone is on social media these days and while it can be an outlet for good, comments can quickly turn ugly.

Public bashing and other nasty behavior is prevalent online.

As you skim through social media, it doesn't take long to find comments that are downright cruel.

Has the internet changed society's views of acceptable decorum?

President Trump uses Twitter to praise people, call them out and, in some cases, fire them.

On News 8's Facebook page stories on anything from politics to pets bring on heated debate that quickly turn into personal attacks.

Even the Padres can't catch a break. On Easter Sunday, the team shared a seemingly innocuous Instagram post (seen below) that wasn't a hit with everyone.

A barrage of comments soon followed both praising and chastising the Padres.

Some fans appealed to a higher power and sarcastically thanked the team for "not playing."

Another online user called the Padres organization "disrespecting" for also supporting Pride; unleashing a war of words with others firing back.

Comments included things like, "God hates you" and "the world would be a better place without you in it."

"When we can be anonymous online, we're allowed to say whatever it is that we want to," said Dr. Pontillo.

The San Diego psychologist says it's no surprise complete strangers feel comfortable spewing hostile words, while hiding behind the screen.

"There's no accountability and there's no perception of how this affects other people, so it's kind of like a free pass," Dr. Pontillo said.

In the virtual world, there's a disconnect from the societal morals and values we have in the real world.

"It's so much more difficult to be rude and jump in line in front of someone, because someone would say, 'hey what are you doing?' and there's eye contact, guilt, shame, remorse and 'I'm sorry,'" said Pontillo.

Social norms on social media seem to lack etiquette and empathy - often leading to what Pontillo says is a "mob mentality."

Keyboard warriors, she says, can be emboldened by shared anger.

"It's provocative, people want to comment on it, they want to have an opinion," said Pontillo.

The psychological phenomenon of "groupthink" fuels the hate.

"It does give a little bit of permission to act in ways that normally we wouldn't do," Pontillo said. "If we were just an individual, we wouldn't stand up and say things in a certain way, but now that everyone's on the bandwagon, we can join it."

It can also make the powerless feel powerful.

"I think what happens is that sometimes, people are motivated to insult others, put them down, or make derogatory comments about others when they have a very fragile ego or self-esteem, because when we focus on the flaws of others, it can sometimes lead us to feel better about ourselves," said Dr. Pontillo.

She wants to remind people that words can be harmful.

"It can hurt others and it can be taken the wrong way," said Pontillo.

She says it's best to disengage and not get drawn in, because of a simple truth:

"Any intense argument online is, in some ways, futile; it's not going to have a resolution," said Dr. Pontillo. "You're not going to get somebody else to see your point of view and feel validated by being mean."

She says celebrities or public figures could be motivated to make controversial statements that cross the line to generate buzz and keep people talking.

Pontillo says, just like in real life, keep in mind, people who make mean and negative comments sometimes have a fragile ego or low self-esteem and feel empowered by putting people down.