A pilot program offering youth offenders an alternative to the traditional juvenile justice system has been successful in its first year in City Heights, officials said Thursday. 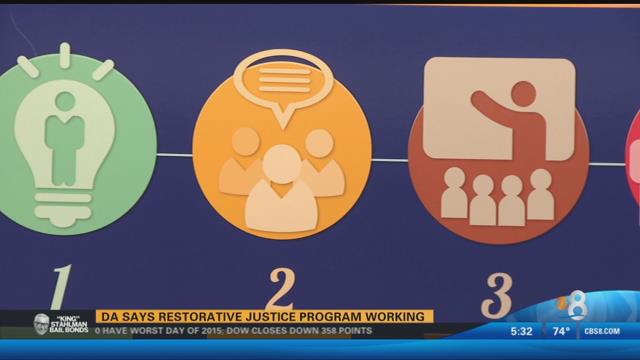 SAN DIEGO (CNS) - A pilot program offering youth offenders an alternative to the traditional juvenile justice system has been successful in its first year in City Heights, officials said Thursday.

The City Heights Restorative Community Conference Pilot Project takes qualified youth offenders and puts them in face-to-face meetings with their
victims and community stakeholders. Together, the parties work out customized plans designed to repair the harm done to victims, families and the community,
as well as the offenders themselves.

Plans may include community service for the offender, restitution, getting involved in after-school activities or taking drug or alcohol classes.

At the end of the process, the offender learns how what he or she did personally harmed the victim, and the victim understands what was happening in
the youth offender's life at the time of the incident and stakeholders and facilitators provide meaningful discussion, oversight, resources and
appropriate consequences for the minor.

In January 2014, a selection committee composed of City Heights residents and other organizations selected the National Conflict Resolution
Center and San Diego Youth Services to provide the Restorative Community Conferencing services in an effort to demonstrate an effective alternative to
incarceration.

Through July, the program has received nearly 50 referrals, most of which are incidents of battery, vandalism and theft.

Of those referrals, 11 were screened out and 24 have reached an agreement on an action plan for the youth to complete.

The program is voluntary and much of its success comes from strong community support of the offending youth, the people harmed and community
stakeholders.

Debbie Newkirk said she decided to participate in the program after a 17-year-old boy stole her purse on the trolley.

Newkirk said a face-to-face meeting with the offender gave him a chance to take ownership over his actions, express remorse and apologize in person for
his conduct.

The victim said she told the boy he could avoid the "path of destruction" he was on.

"We ended up hugging," Newkirk said.

Steve Dinkin, president of NCRC, said plans are to expand the restorative program throughout San Diego.

"Our communities all benefit from restorative processes because the victims are getting greater satisfaction than they get in court, the youth are
getting an opportunity to make amends, and the community is getting more involved in helping youth turn their lives around," Dinkin said. "With RCC,
community relationships are strengthened, trust and respect grow, and everyone is safer in their homes and neighborhoods."