Dangerously high winds wreaked havoc in the East County on Thursday putting homeowners and firefighters on edge. Across the county, the Santa Ana winds were expected to gain strength Thursday with ... 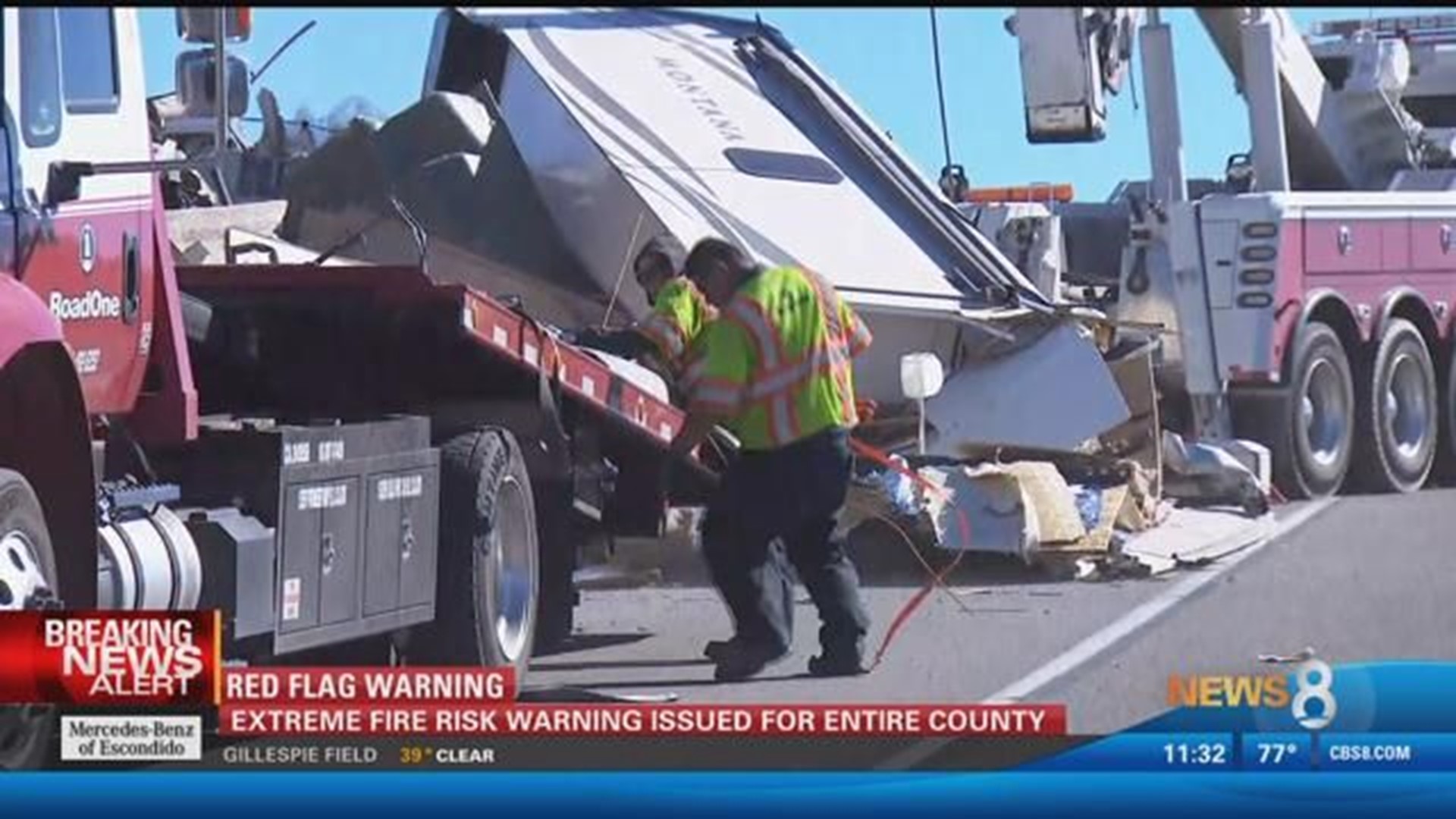 Click here for the latest on the Lilac Fire.

Across the county, the Santa Ana winds were expected to gain strength Thursday with gusts over 80 mph.

Ken Pimlott, director of the California Department of Forestry and Fire Protection, says the wind wildfire threat to Southern California for Thursday is purple.

The has color has never been used before and means there is extreme danger and that fires that erupt will burn uncontrollably.

The National Weather Service's red flag wildfire warning was extended earlier in the week and is set to expire Sunday.

A high wind warning is set to expire at 4 p.m. on Friday.

Due to the winds, San Diego Gas & Electric cut power to several communities starting Wednesday as a safeguard while the county prepared for the critical conditions.

"An extreme weather event with high winds and dry conditions is underway in select areas of the region," SDG&E officials said. "To maintain public safety, SDG&E has begun turning off power to customers in several communities. Current conditions indicate that power may remain out for several days before it can be safely restored."

Approximately 1,350 customers were left without power.

In response to the cut power, the American Red Cross of San Diego/Imperial Counties opened two shelters to assist those in East and North counties affected by the outages.

The other shelter is located in Escondido at the East Valley Community Center (2245 East Valley Pkwy.)

According to the Red Cross, these shelters can provide a place for people to stay along with three meals a day and basic health services. They also said both shelters will stay open "as long as there is a need."

"The fire potential with this Santa Ana event is extreme," the Forest Service said on its Santa Ana Wildfire Threat Index page. "Easterly winds of 20 to 45 mph can be expected with gusts exceeding 80 mph over the higher terrain and in the more wind prone areas. Humidity will be in the 5- to 15- percent range. Fires will spread very rapidly through all fuel types. Any new fires will have a high probability of becoming large in a short period of time."

The conditions expected throughout San Diego County were even more extreme than the dry, windy conditions that fanned the three wildfires that have burned more than 20,000 acres in the Los Angeles area, as well as the 90,000-acre Thomas Fire in Ventura County.

The San Diego Fire-Rescue Department, Cal Fire and other local agencies have also beefed up staffing this week to handle potential fires.

For fire and weather resources visit the links below: