Did Issa push city of Vista to quash the protests?

Protesters gathering outside Representative Darrell Issa's office in Vista has become a weekly occurrence. But News 8 has obtained copies of a message left by the local congressman asking the City ... 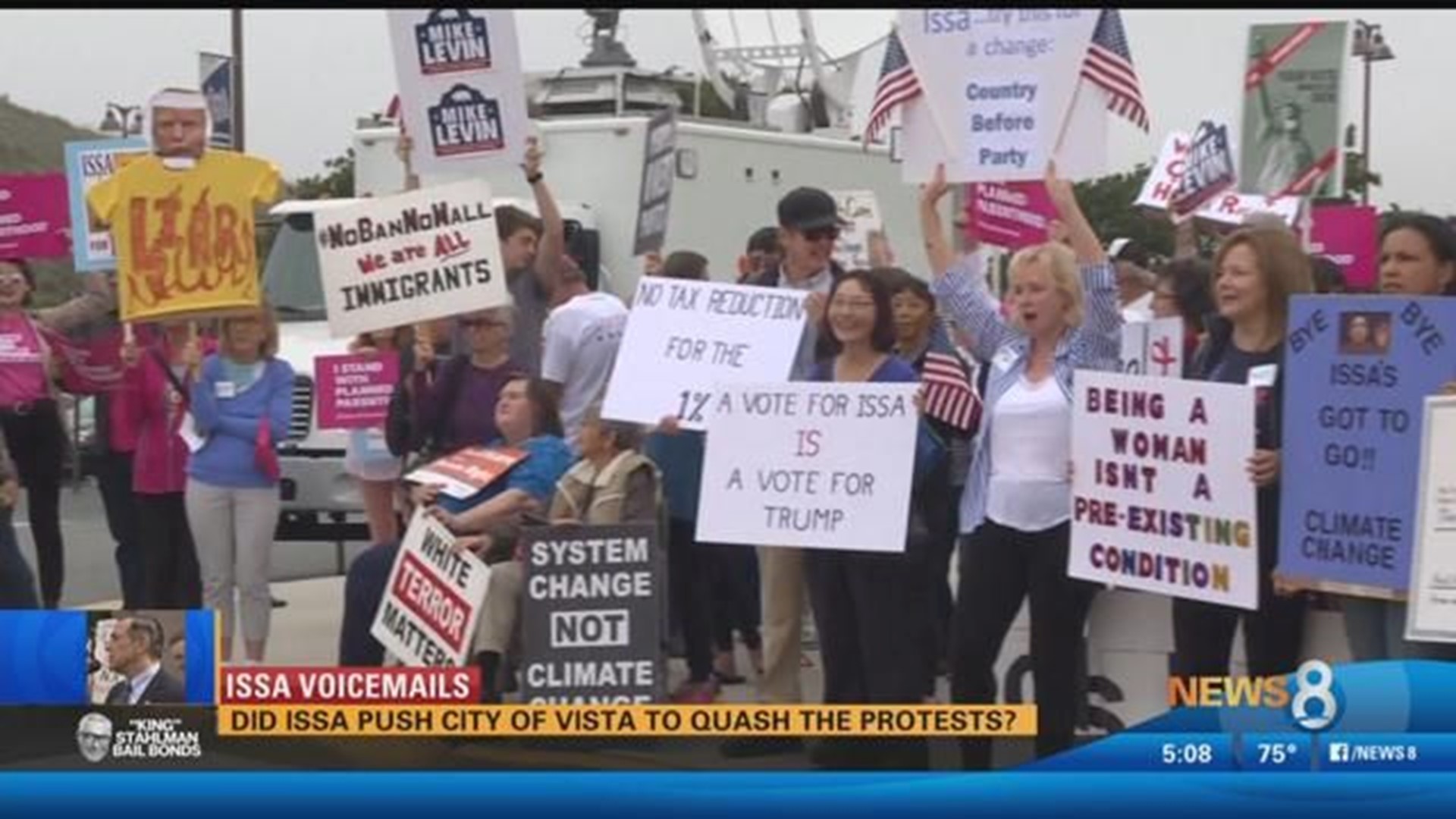 But News 8 has obtained copies of a message left by the local congressman asking the City of Vista to take action against the demonstrators.

"The protesters here are kind of loud today and they have a megaphone and are being very disruptive to our business."

"This is Congressman Issa. I want to verify that that's true."

That was the content a message left by a resident of an office building that also houses Rep. Darrell Issa's Vista office along with Issa confirming the complaints.

It was obtained through a public records request by News 8.

Issa called during a protest where the congressman also appeared on the roof of the building to wave at the crowd.

"They have a permit. They're on both sides of the street. They're sitting on sidewalks and they're clearly violating their permit. Whether it's George Soros or the ACLU or the various groups that help them organize they haven't trained them how to do compliant protest. Would you please come and enforce?"

Cell phone video shows deputies did show up and spoke with Issa.

The city says neither deputies nor code enforcement took any action because there were no violations.

Congressman Issa disagreed in a letter to the city a few weeks later saying the protesters are impacting tenants adding: "this isn't about me or my office. I can handle a little heat from some protesters."

"We're saying 'hey, come enforce the rules that are in place if there's a conflict here,' but we want to make sure everyone comes to a mutually beneficial solution," said Issa's spokesperson Calvin Moore.

Issa's office says they are not complaining about the protesters and are concerned for the safety of tenants and protesters - adding they respect their right to speak out.

The Sheriff's Department says they've only documented one complaint about the group and it came from Issa's office.

The city renewed a permit for the protesters three times.

A Vista spokeswoman says they've received no formal complaints since it was last issued in June. The City of Vista also released the following statement:

The City of Vista recognizes and values the unalienable right of free speech and the right to assemble and demonstrate. In order to secure the safety of the participants and the public, the City requires a free permit for all gatherings over 50. These permits outline safeguards placed in order to protect the welfare of those who may be affected by pedestrian and/or vehicle traffic, disabled access needs, etc. The City’s Code Enforcement program is complaint driven and each complaint is checked by Code Enforcement Officers. In this case, the City’s Code Enforcement Office and the Risk Management Division, as well as the Vista Sheriff’s Office, collaboratively followed up on the complaints. No citations were issued.

Before that in May, Issa's office called ahead of one protest also asking about enforcement:

"This is Bill Christensen with Congressmen Issa's office. Wanted to check back with you to see if they pulled the permit and what enforcement there might be with that?"