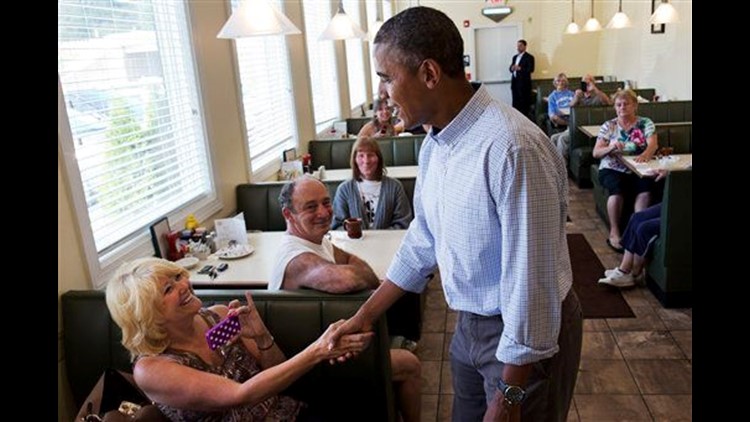 Economy is being eclipsed as top campaign issue

Economy is being eclipsed as top campaign issue

WASHINGTON (AP) — President Barack Obama still calls shoring up the middle class his "No. 1 priority," but recent events overseas and at home are overshadowing the U.S. economy as a political issue.

The civil war in Syria and alleged use by Damascus of chemical weapons, political turmoil in Egypt and revelations about the extent of the National Security Agency's surveillance programs are complicating Obama's efforts to keep the focus on the economy.

And while the slow and uneven recovery is now 4 years old, its advance could be threatened by U.S.-led airstrikes against targets in Syria that might send already rising oil prices soaring.

The eclipsing of the U.S. recovery by other pressing events could be a factor in next year's midterm election campaigns and in the presidential contests two years later. Also, as Obama slips more and more into lame-duck territory, his ability to shape the national agenda seems diminished.

While the unemployment rate of 7.4 percent is still well above the 5 to 6 percent typical of a healthy economy, it has been tracking down steadily since it peaked at 10 percent in late 2009. House prices are on the rise and so is consumer spending. Big banks are reporting strong profits again and regulators are winding down investigations into reckless Wall Street lending practices.

U.S. exports are inching up and the budget deficit is inching down. After four years of trillion-dollar-plus shortfalls, the deficit this year is expected to come in at just over $600 billion.

Many European countries are clawing their way out of recession. Even Greece, the poster child for a troubled economy, is managing a rare budget surplus.

Obama has been making campaign-style speeches around the country focusing on longer-term growth, education, housing affordability, infrastructure jobs and lifting the battered middle class. Republicans dismiss Obama's rhetoric as standard Democratic big-government fare and continue to emphasize what they see as government overspending.

"I think it's a hard moment, not just for the Obama administration but the whole sense we have of how we can conduct government right now," said Wayne Fields, a professor who studies political rhetoric at Washington University in St. Louis. "Both foreign policy and domestic policy are interacting in really complicated ways around these issues."

In recent months, the economy has looked "pretty good" for Obama, suggests Douglas Brinkley, a presidential historian at Rice University. "Not home-run good, but there's been incremental improvement in the economy."

Yet even without the crisis in Syria, two looming financial showdowns threaten that recovery.

The first is a possible partial government shutdown if Congress fails to pass legislation to keep the government functioning beyond the Sept. 30 fiscal-year end. The other is an expected new battle over increasing the government's borrowing authority. The Obama administration last week said that it would hit its borrowing limit in mid-October without a higher debt ceiling — earlier than widely anticipated.

The national debt ceiling now stands at about $16.7 trillion. The overall debt keeps rising even as deficits come down because the government still spends more than it takes in.

House Speaker John Boehner told a GOP fundraiser last week he'll push for "cuts and reforms that are greater than the increase in the debt limit."

"We're going to have a whale of a fight," said Boehner, R-Ohio.

Some conservative Republicans, including those in tea party factions, are even threatening to use the debt-ceiling battle to defund parts of Obama's health care law.

The administration is pushing back hard against the GOP threats.

"Our position is unequivocal," says White House press secretary Jay Carney. "We will not negotiate with Republicans in Congress over Congress' responsibility to pay the bills that Congress has racked up — period."

In summer 2011, the White House and congressional Republicans sparred for weeks over a debt-limit increase. While they finally cut a deal to avoid a government default, the prolonged dust-up led to a first-ever downgrade of the nation's credit rating.

The White House has been working quietly with some GOP senators on a possible compromise, but with little headway.

Thomas Mann, a congressional scholar at the Brookings Institution who studies governance, says control of the national agenda by any president is fleeting at best. Lyndon Johnson only exercised it early on, as did Ronald Reagan; Bill Clinton "never fully" had control and Obama did only "during the first two years with strong Democratic majorities."

"Foreign policy events often overtake presidential ambitions, as do opposition parties that manage to win control of one or both chambers of Congress," Mann said. "I don't think the economy is less important to Americans. It's more that they have come to doubt that anything constructive can emerge from Washington."

The brief government shutdowns of late 1995 and early 1996 came because of bitter budget and debt-ceiling clashes between Clinton and Republican House Speaker Newt Gingrich. Gingrich and his troops hoped voters would blame the shutdowns on the Democratic president. But polls showed they mostly blamed Republicans.

"Clinton and the people around him were good," said GOP strategist Rich Galen, who once worked for Gingrich and who sees peril ahead for Republicans if they can't get together on budget issues. "I remember saying at the time that a White House that is aggressively on message is unstoppable."

Galen said there's no Republican "opposite" to Obama and that it's hard to blame former President George W. Bush any longer.

"You could say 'Boehner' a hundred times and, out of 300 people, two would know who you were talking about," Galen said. "If you held my head under a water faucet and said, 'Tell me what the Republican economic plan is,' I couldn't tell you. I think what we've got to do is come up with an alternative that's easy to explain and where people go, 'Oh, yeah. Well, that makes sense. Let's go do that.'"