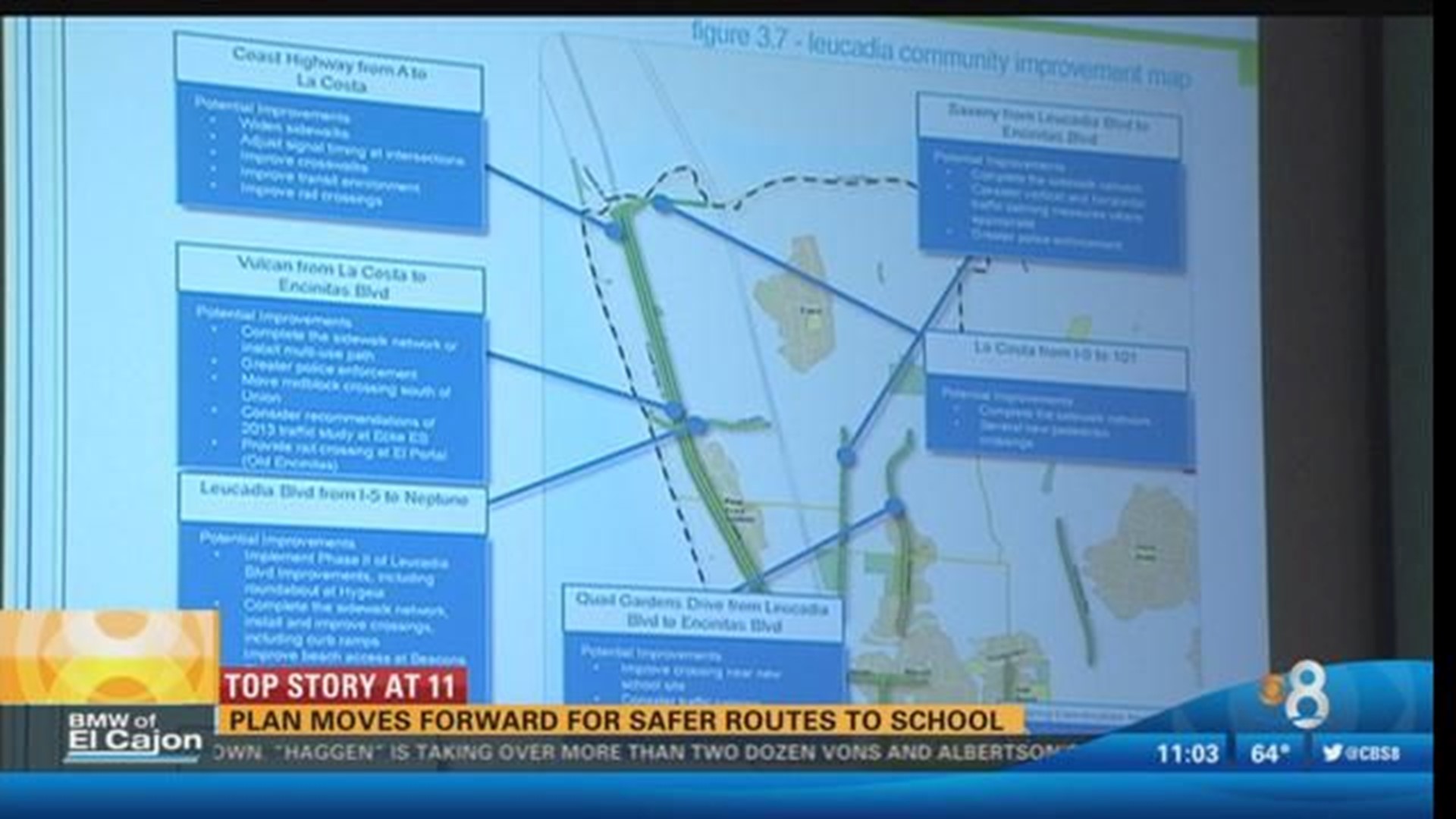 ENCINITAS (CBS 8) - Some North County parents say transporting their kids to and from school is dangerous and they are pushing for a plan to help keep their children safe. Their voices have been heard and now the Encinitas City Council is moving forward with a plan that involves safer routes to school.

Some of the Encinitas parents says getting their kids to and from Paul Ecke Central (PEC) is downright dangerous so they have been pushing city leaders for a plan to keep their children safe.

“It isn't a matter of if a horrendous accident will happen but when,” said PEC PTA President, Amy Flicker.

On Wednesday, the Encinitas City Council heard an earful about the nightmare traffic and close calls near PEC in Encinitas.

“In all my years at PEC, I've noticed traffic is a problem,” said a 6th grader to the council.

The crossing guard says some drivers have run over her feet.

“I stand out on Vulcan (Avenue) yell at cars to slow down daily,” said Christine Andrade, school safety officer.

Goulet stood in front of the council and shared her scary story of holding her baby in her arms and nearly being hit by a pizza delivery driver in the crosswalk on Vulcan Avenue, “As they were waiting they got very frustrated and crossed the double yellow line into oncoming traffic and floored it right through the pedestrian crosswalk and passed all the cars,” said the mother.

That congestion on Vulcan Avenue is caused by many parents who say it's not safe for their children to walk or ride their bike so they drive. Vulcan is the main street used to pick and drop off kids at PEC and parents say the loading and unloading zones are not big enough with the growing enrollment.

“There is no sidewalk and barely enough room to park and then we have to hug along the fence to make our way to school,” said father, Art Schmidt.

For two years parents, principals, staff, volunteers and mobility advocates have rallied the Encinitas Traffic Commission around the “Let's Move, Encinitas” for safer routes including biking, walking and driving.

“Our kids cannot even participate in our own district bike and walk to school days because it's too risky for our kids,” said Flicker.

The council approved the plan in a unanimous vote. Staff says it doesn't have current fiscal impacts and reports in 2012, the council appropriated funds to the project in the amount of $210,450 which has been included in the budget. The project is primarily funded by the $183,000 Caltrans Community-Based Transportation Planning grant. The City's Local Safe Routes to School program, funded by TransNet money, provided the required match to the grant, in the amount $27,450. The project has been completed within the established budget.

The project will include, sidewalks, blinking lights, raised sidewalks and stop signs.

Now that the city council has approved the “Let's Move, Encinitas” plan, it can start being developed but each project will need planning approval.