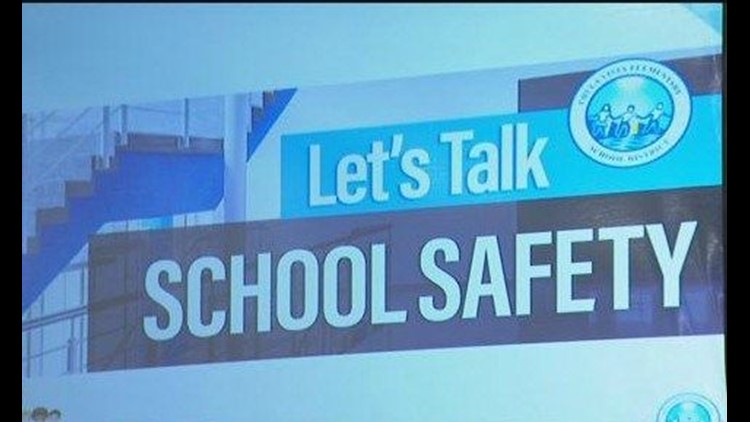 Escondido police and school officials work together on school safety

Escondido police and school officials work together on school safety

Representatives from public, private, and faith-based schools were in attendance to announce collaborative school safety efforts in the wake of the recent threats that have been made at schools across the county.

Escondido High School District recently introduced the “run-hide-fight” protocol to prepare students and teachers to defend themselves in the worst-case scenario, by taking action to disarm or incapacitate a shooter.

That strategy, developed by the U.S. Department of Homeland Security, trains teachers and students to seek the safest way off campus, or into hiding, in the event of a school shooting.

A few weeks ago, San Diego Unified announced changes to its policies when it comes to preventing, reporting and dealing with school threats.

Within the last month, many surrounding districts have taken action and changed the way they address possible threats.

Recently, Chula Vista hosted a safety meeting informing parents and students about safety practices and changes when it comes to emergency situations. There were also forums at Sweetwater Union District and in Poway.

Dozens of school threats have been made towards schools throughout San Diego since the shooting in Parkland, Florida. Most of them resulting in an increase in law enforcement presence around the campus.

Escondido Police Department released a statement saying the news conference comes as a result of recent school shootings throughout the country.

"The shootings that have occurred on school campuses throughout the country are truly tragic. Many national conversations have come in the aftermath of these tragedies. The conversations have largely focused on the goal of prevention and preparation. It is from this perspective that Escondido police and school officials have worked collaboratively for years to ensure the safety of our local schools."