'Eye in the sky' drones flying in San Diego County

They look like small helicopters with onboard cameras. Surveillance drones are taking off in San Diego County, literally. 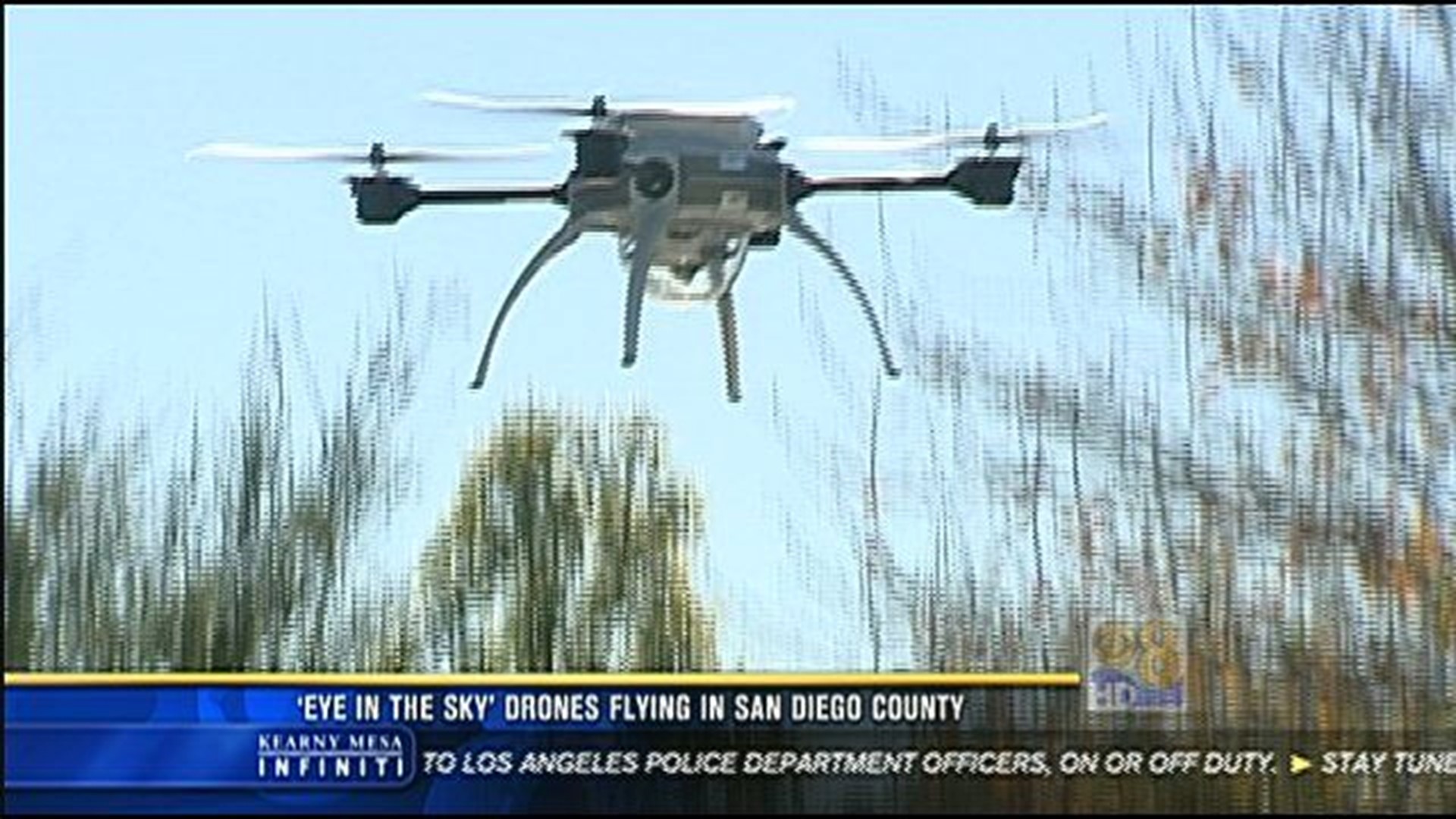 VISTA (CBS 8) - They look like small helicopters with onboard cameras. Surveillance drones are taking off in San Diego County, literally.

Police agencies, small businesses, even your own neighbor could soon be flying an "eye in the sky."

News 8's Phil Blauer participated in a demonstration of the $100,000 "Scout" surveillance drone, manufactured by Datron in Vista.

"This unit literally flies itself. It just waits for us to tell it what to do," said Paul Wilson, Field Support Specialist with Datron.

"I can pull this thing out of a backpack and have that video come directly to me, so I know what's going on," said Chris Barter, Datron Program Manager. "The real value is it streams video to a computer."

Datron managers frequently give demonstrations of the Scout for the media, the military, and police agencies nationwide.

"We're shooting to get the system into law enforcement and educate the public about how these systems are ultimately of benefit," said Barter.

The video streamed back from the Scout can be recorded on the computer and monitored live. The drone can also snap still photos from above.  It can fly for about a half hour on a single battery.

Police departments across the country have purchased surveillance drones for use in swat standoffs, drug busts, or search and rescue operations.

In 2011, Datron conducted a drone demo for the San Diego Sheriff's Department, but the department never purchased one, according to Commander David Myers.

The department reviewed several other drones last year on display at the International Association of Chiefs of Police convention in Mission Valley, Myers said.

Myers said he is not aware of any local law enforcement agency currently using a surveillance drone, including the Sheriff's department.

"About two months ago there was a train derailment in Kentucky. The Scout was used in the air to take photography of the train collision," said Barter, the Datron manager.

Most people are familiar with military use of drones in war zones but the technology is evolving and getting cheaper.

For about $300, anybody can go online and buy a personal drone with streaming, high-definition video capabilities.

"I live in Encinitas and I've gone surfing and actually seen these things up in the air. At that point though, those are just hobby-class birds," said Barter.

Current Federal Aviation Administration rules restrict the flights of surveillance drones to line of sight and 400 feet in altitude.

The Scout is one of several drones being reviewed in Oklahoma by the Department of Homeland Security for surveillance capabilities, which is causing privacy concerns.

"This is a public issue. It deserves to be debated," said Keenan. "I think local law enforcement understands that people are a little freaked out by the idea of our sky being populated by these surveillance drones."

The ACLU wants to make sure police agencies are restricted from using drones for routine surveillance on civilians.

"They can stay up there for a long time. You can't even hear them. So it's a potential for complete and total surveillance that we just haven't confronted as a society," Keenan said.

Datron managers said their Scout drone is no more invasive than a helicopter.

"Unmanned aircraft are no different than manned aircraft. They have to operate within the same legal framework as all aircraft platforms," said Barter. "You can't go off and do things that are illegal."

In response to public records requests, the Federal Aviation Administration last year released a list of agencies nationwide with FAA permits to fly drones. No law enforcement agencies in San Diego County were on the list.