Young people proudly posting vaping videos on social media is a reflection of an alarming trend in American high schools where 1.7 million teens – an estimated eleven percent of all students – are ... 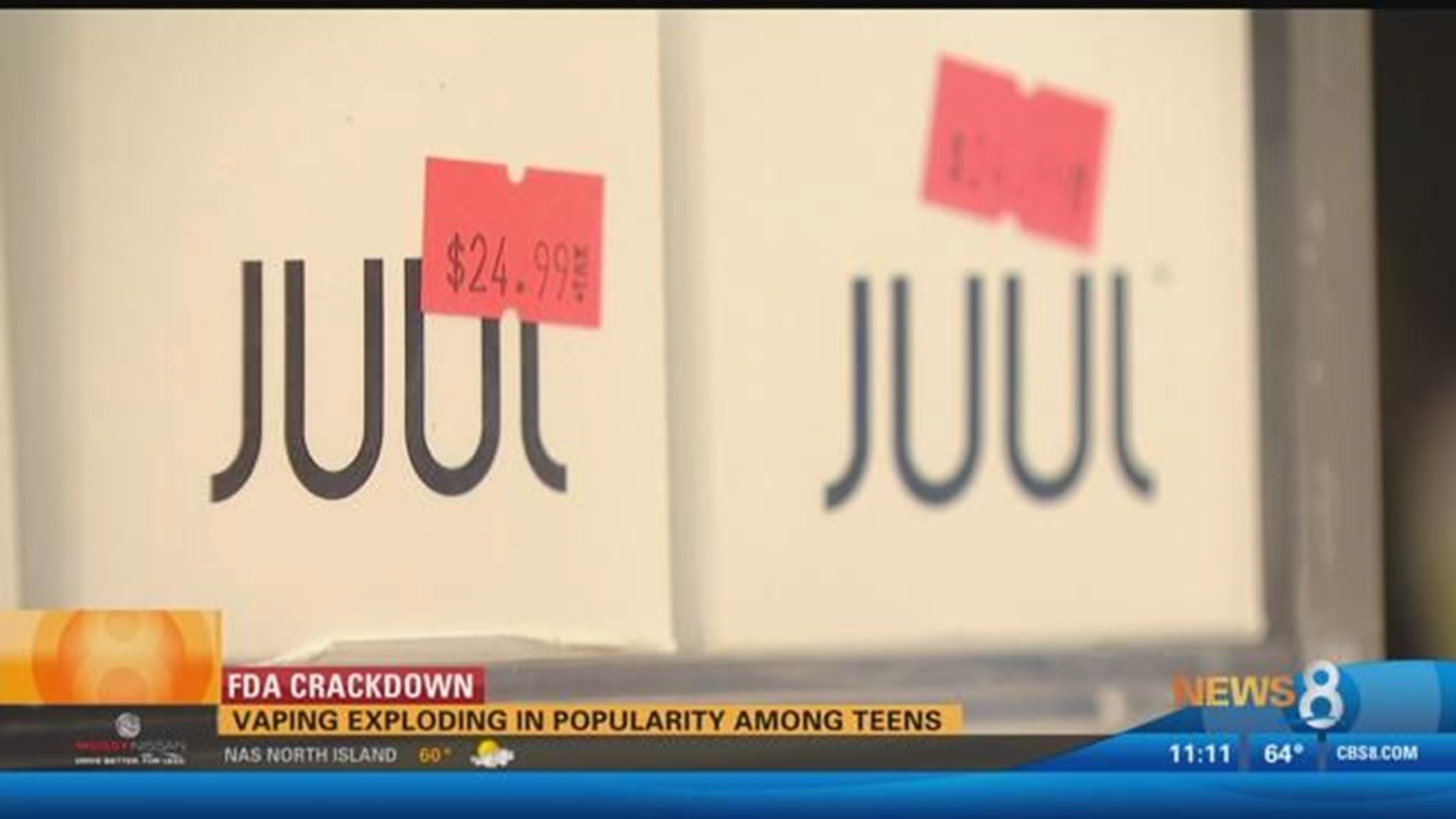 SAN DIEGO (NEWS 8) - Young people proudly posting vaping videos on social media is a reflection of an alarming trend in American high schools where 1.7 million teens – an estimated 11 percent of all students – are using e-cigarettes with some students starting as early as middle school.

Zabdi Chavez and David Sanchez are San Diego high school sophomores and also volunteer as youth advocates for change. According to the two students, vaping has become so widespread, some kids are even surreptitiously lighting up in class, coasting under their teacher's radar. That's because newer e-cigarette devices produce very little vapor and many like the JUUL resemble a USB flash drive more than a cigarette, making them easy to conceal.

The $4 billion a year vaping industry is also coming under fire for creating e-cigarette-related products that the U.S. Food & Drug Administration has said clearly appeals to young people – including candy-like packaging for e-liquids. Examples include faux juice boxes, vanilla wafers and lemon twist.

William Perno, a prevention specialist for Say San Diego (Social Advocates for Youth), explained to News 8 that e-cigarettes have helped some adult cigarette smokers cut back or quit smoking. However for the youth, the trend is having the opposite effect. There is evidence to show that the use of these vaping devices is leading young people to tobacco smoking, according to Perno.

Manuel Andrade, with the San Diego Smoke-Free Project, said his group is pushing for legislation to help prevent access by teens to these products.

The vaping industry has denied that it is marketing their products to teens. In fact, JUUL Labs recently announced it will spend $30 million on a campaign to combat underage vaping in response to the FDA’s crackdown. The following is a statement submitted to News 8 from JUUL:

“Our company’s mission is to eliminate cigarettes and help the more than one billion smokers worldwide switch to a better alternative. At the same time, we are committed to deterring young people, as well as adults who do not currently smoke, from using our products. We cannot be more emphatic on this point: No young person or non-nicotine user should ever try JUUL.

“We want to work with lawmakers, FDA, parents, educators and community leaders to address underage use. Under the guidance of tobacco control experts and public officials led by Iowa Attorney General Tom Miller, we’ve committed $30 million to independent research, youth and parent education and prevention, and community engagement. We want to be part of the solution in helping to keep JUUL out of the hands of young people.”

"The Vapor Technology Association (VTA), the leading national trade association of electronic cigarettes and vapor products, applauds the FDA's long anticipated action to crack down on bad marketing practices in the vapor industry.

As a leader on this issue, VTA is the only trade group that has developed and adopted comprehensive Marketing Standards for Members that are designed to ensure that vapor products are kept away from and not marketed to youth.

We look forward to continuing to work with the FDA on this important issue."