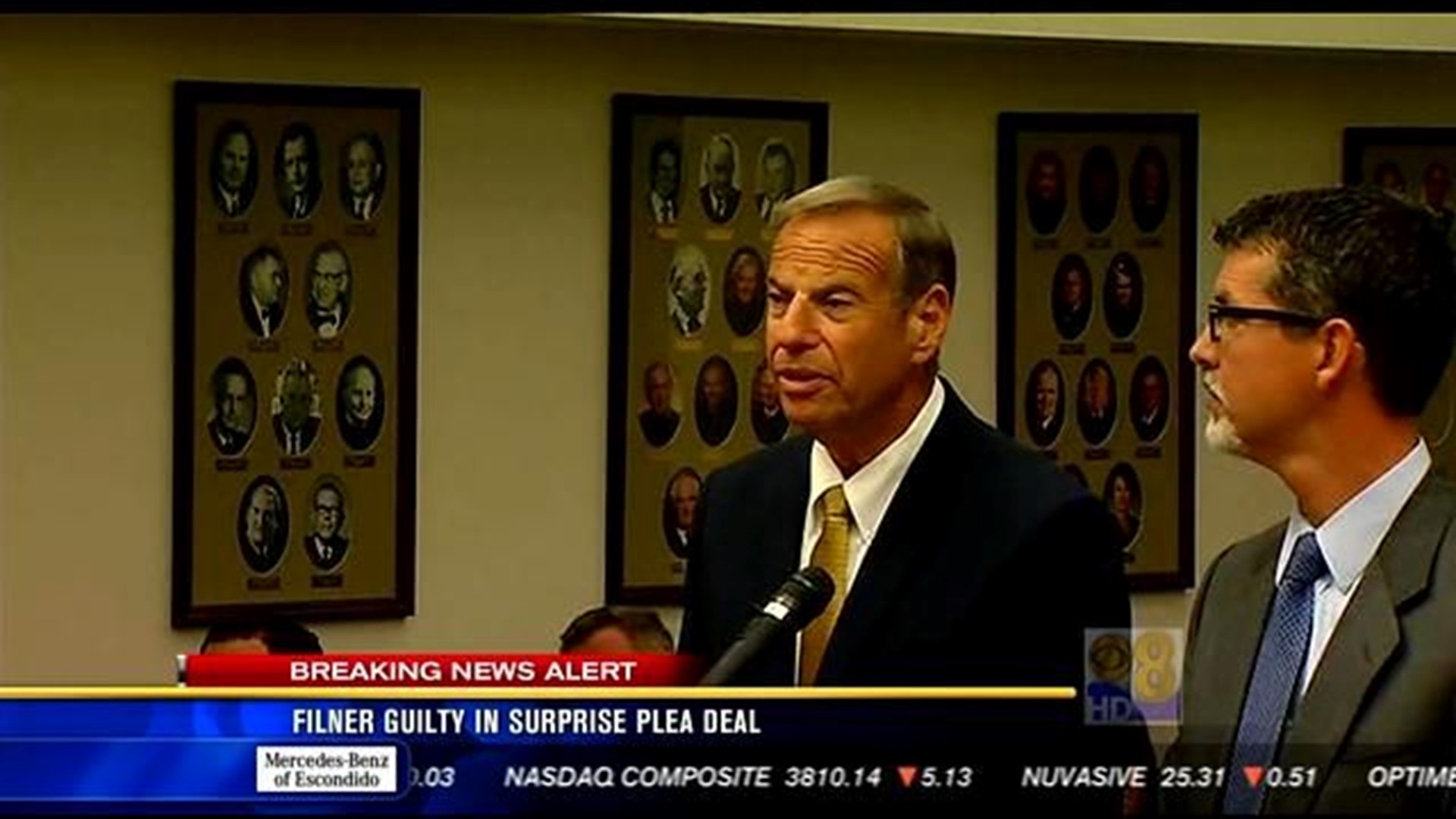 The plea agreement came on the same day Filner was charged in a criminal complaint by the state Attorney General's Office. The stipulated agreement calls for the former multi-term congressman to be placed on three years probation and avoid jail time, although he is expected to spend three months on home confinement.

According to the Attorney General's Office, Filner will also be barred from ever seeking or holding public office. He will also be required to undergo mental health treatment while he is on probation. If he violates probation, he would face up to six months in jail.

He remains free on his own recognizance until his sentencing hearing, which was sent for Dec. 9.

The ex-mayor agreed to go through the formal booking and release process at the Central Jail on Sunday.

"This was Mr. Filner's chance to put all of this behind him," one of his attorneys, Jerry Coughlan, said after a court hearing. "His conduct, he admitted in court, and has admitted, was inappropriate, over the top, and today admitted it was criminal. Mr. Filner profusely apologizes to each person he might have harmed, and this permits the various women to put all of this behind themselves too, and to know that (this) conduct will not occur with anyone else in the future."

The attorney said Filner has a long history as a Freedom Rider in the 1960s, 20-year college professor, school board president, city councilman, congressman and mayor.

"He does not want that legacy to be destroyed by his recent personal conduct," Coughlan said.

Coughlan praised prosecutors for reaching the plea deal before a grand jury convened on the sexual harassment charges and other alleged improprieties. He referred questions on a reported federal probe into Filner's handling of a Kearny Mesa development by Sunroad Centrum Partners to federal authorities.

In a statement of facts, Supervising Deputy Attorney General Melissa Mandel told Presiding Judge Robert Trentacosta that Filner -- while attending a fundraiser with Jane Doe 1 last March 6, used "greater force than necessary" to restrain her against her will and used additional force to overcome her resistance, in what became known as the "Filner headlock."

Mandel said Filner used force and kissed Jane Doe 2 on the lips without her consent at a "Meet the Mayor" event last April 6.

Filner also admitted grabbing Jane Doe 3's buttocks after she asked to take a picture with him at a May 25 rally at Fiesta Island.

Filner, 71, resigned from office Aug. 30 after nearly 20 women came forward saying he had groped them or sexually harassed them over several years.

"This conduct was not only criminal, it was also an extreme abuse of power," Attorney General Kamala Harris said. "This prosecution is about consequence and accountability. No one is above the law."

Under the plea deal, Filner will also be forced to surrender his mayoral pension accrued from the time of the felony offense -- March 6 -- through his Aug. 23 resignation, according to the Attorney General's Office.

Filner has been jogging, going through therapy and talking to friends about how to deal with his problems since the victims came forward, Coughlan said.

"I would think it's probably the hardest thing he's ever lived through," Coughlan said of Filner. "It's a thing you never think, with that background, you would ever have to face."