Opponents of Mayor Bob Filner are scheduled to hold a "Not Welcome Back" rally at the Civic Center Plaza in downtown San Diego Monday, following his completion of a stint in a behavioral therapy progr 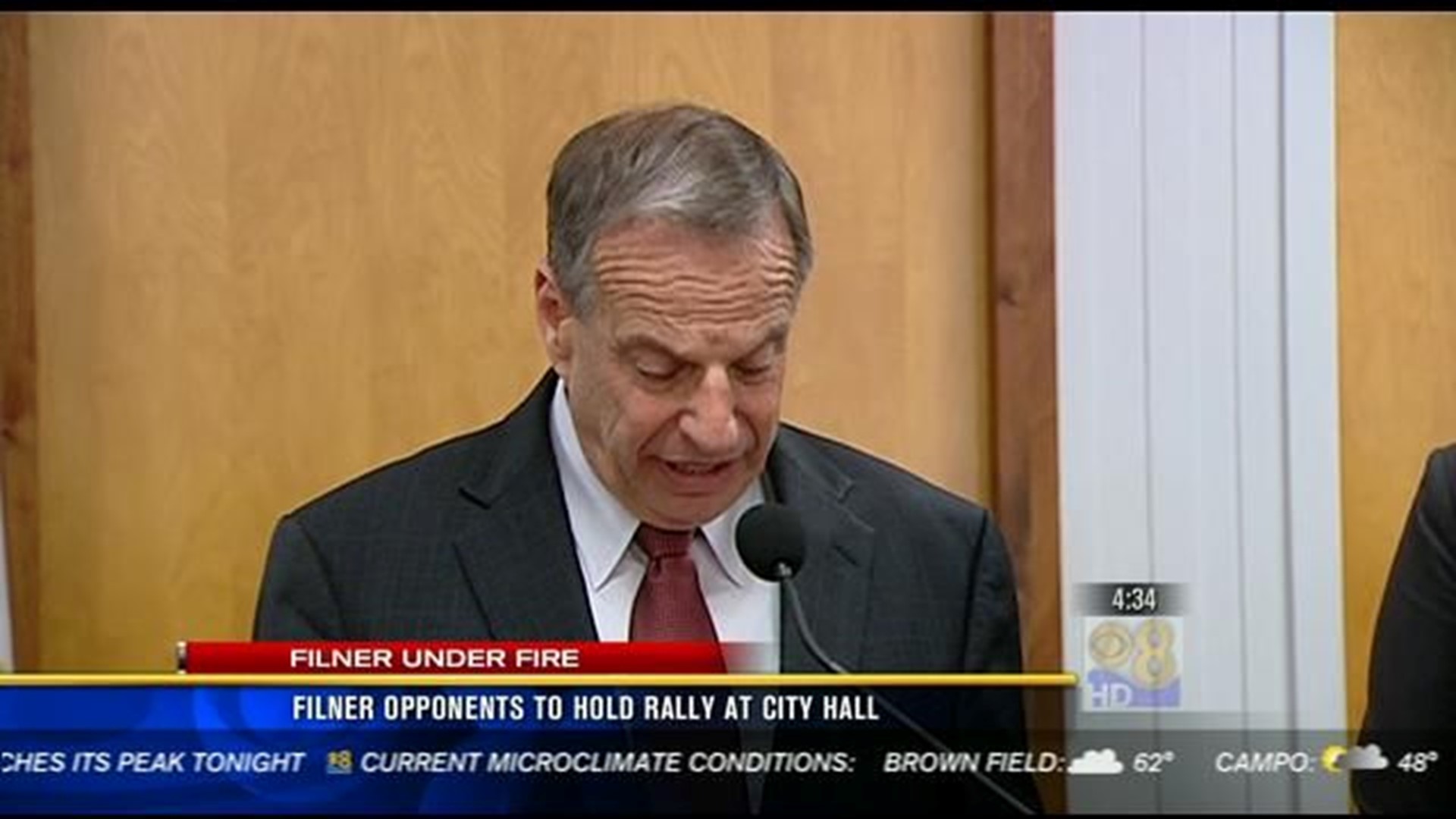 SAN DIEGO (CNS/CBS 8) - About 75 opponents of embattled Mayor Bob Filner held a "Not Welcome Back" rally Monday at the Civic Center Plaza in downtown San Diego in the wake of his completion of a stint in a behavioral therapy program.

The rally was held in response to Friday's news that Filner had finished an inpatient behavioral therapy program.

His lawyer, Irvine-based James Payne, said his client would not return to work this week. He said Filner would continue treatment as an outpatient.

The mayor has been publicly accused of sexual harassment by 14 women, including two city employees -- one of whom has sued Filner and the city. He also is being investigated on allegations of shaking down developers.

One of the organizers of the rally, Ben Katz, said Filner's behavior has made San Diego "the butt of jokes" on late-night television and drawn international headlines.

Still, he's never been more proud of being a San Diegan, said Katz, a political consultant -- "proud because of the people here today, and the thousands -- tens of thousands -- of other San Diegans who have stood up and said 'this is not acceptable."'

The core group of rally participants held signs, several of which said, "You're Not Welcome Back." A group of onlookers, many of them City Hall employees, watched nearby.

Francis Barraza, executive director of the Republican Party of San Diego County, said it is hard enough to be taken seriously as a woman in politics.

"What Bob has done has hurt women like me," Barraza said, "women who are professionals, (who) have worked hard."

He said he frequently stops at a coffee shop in the morning, and working people he talks to are suffering from Filner "fatigue."

The mayor took the city in a new direction of strengthening neighborhoods when he took office in December, but Filner isn't necessary for keeping that going, said Crenshaw, who lost a City Council special election in May to one of Filner's ardent supporters, Myrtle Cole.

Cole and Councilwoman Marti Emerald were the last two members of the panel to call for Filner's resignation in the wake of the allegations, doing so Friday.

Both of California's representatives to the U.S. Senate and other local civic and business leaders have called for the mayor to step down immediately to seek treatment as a private citizen.

The recall effort was ramped up over the past week, with the addition of political consultants who previously qualified a pension reform initiative for the June 2012 ballot.

Nearly 102,000 valid signatures are needed to qualify the Filner recall petition for the ballot, according to the City Clerk's Office, which must receive the signatures by Sept. 26.

According to U-T San Diego, Filner has until Monday to submit a statement to the recall effort's organizers stating the reasons he should not be voted out of office, which the organizers would in turn would be required to publish.

In the meantime, News 8 is looking closer at why the mayor's chief of staff Lee Burdick changed the locks on his office door Friday.

"My concern is/was that if anything was removed while the mayor was away, it could raise all kinds of questions about preservation or spoliation of potential evidence," she told Voice of San Diego.

Late Friday, News 8 saw SDPD Police Chief William Lansdowne leaving the mayor's 11th floor office lobby, but he wouldn't confirm or deny whether he had been present when the locks were switched.