OTAY MESA (NEWS 8) - Sprawled out in a barren block of South County land, with the U.S.-Mexico border in the background, border wall supporters and counter-protestors punched, tackled and swung Ame... 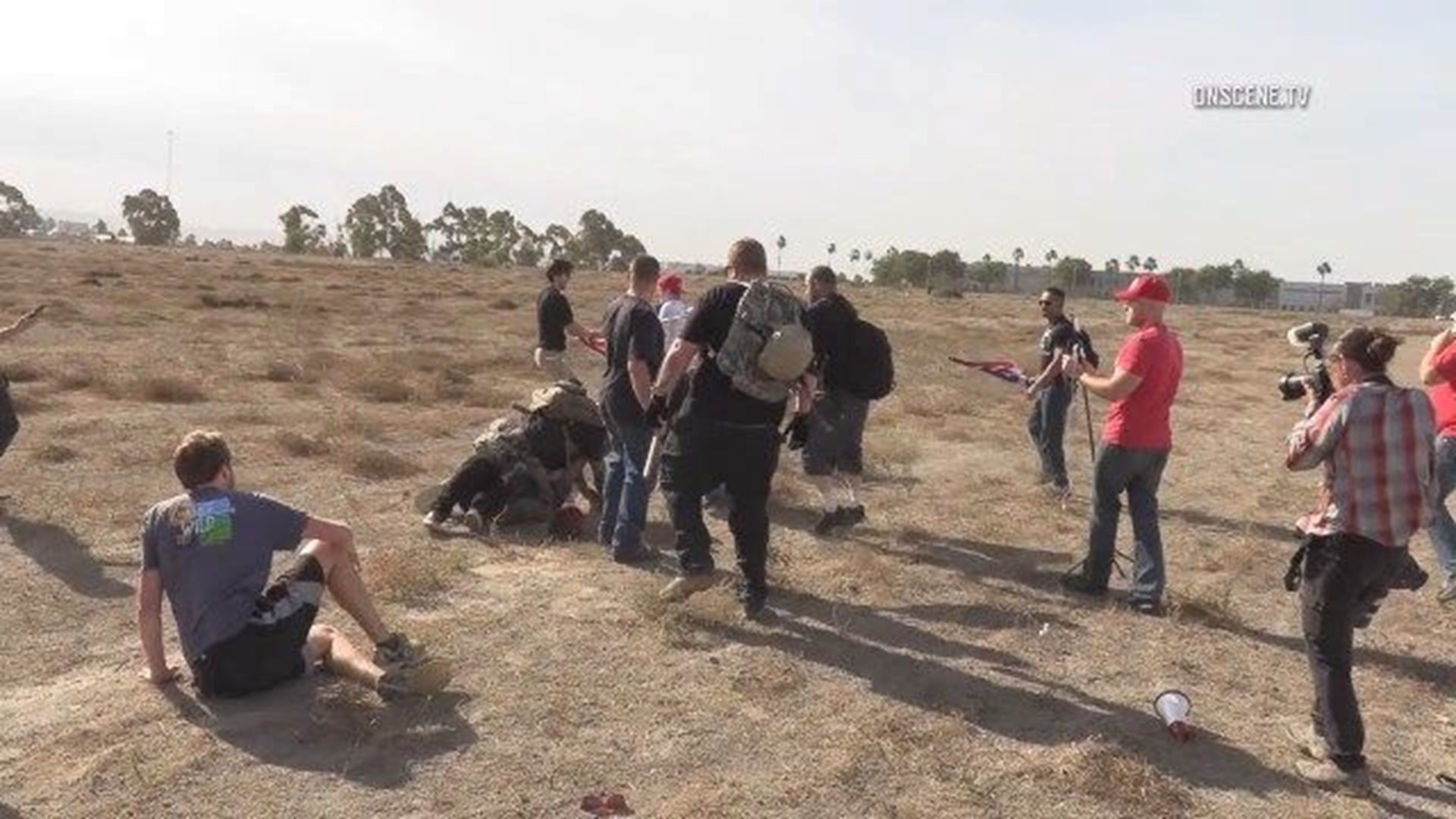 OTAY MESA (NEWS 8) - Sprawled out in a barren block of South County land, with the U.S.-Mexico border in the background, border wall supporters and counter-protestors punched, tackled and swung American flags at each other in the name of their side of the border wall argument.

Several pro-border wall groups staged a rally Saturday in Otay Mesa in support of President Donald Trump's plan for a revamped border wall and border security agenda, and the United States Border Patrol, according to its Facebook event page.

Not long after the rally's noon start time were counter-protesters at the scene.

The rumble ensued when a small group of counter-protestors started a chant from the rear of the gathering, apparently yelling "Racists go home!"

A group of wall supporters equal in size carrying flags moved in quickly and engaged in a shouting match with the other side as deputies and police stood by. What began as face-to-face shouting and chest bumping escalated, and seconds after the first shove by a counter-protester the first punch was thrown by a wall supporter.

That fight spawned several others, and in every direction, small huddles of people were kicking up dust -- some trying to pull foes off of grounded and outnumbered friends, others turning flags upside down and taking their best shot at opponents' heads and bodies.

The fighting lasted a few ticks longer than a minute until it was interrupted by a marching line of deputies and officers in light riot gear. No attempts were made on law enforcement and the two sides returned to their corners, some proclaiming victory and others licking wounds.

"Note: Legal personal protection is allowed for use in self-defense in case rowdy anti-American protesters show up. We have no indications yet that they are coming, but if that changes we will update you on this page. DO NOT BRING ANY ILLEGAL WEAPONS TO THE RALLY.?"

The rally, hosted by San Diegans for Secure Borders, Unite America First, Frontline America, San Diego Patriots, Latinos for Trump, Make America Great PAC and other pro-border wall groups was dedicated to Kate Steinle, a woman killed by a bullet ruled accidentally fired from a gun in the hands of an illegal immigrant, and Border Patrol Agent Rogelio Martinez who was killed in another highly-politicized incident in West Texas.

RELATED: How the Kate Steinle case became an immigration flashpoint

Congressman Duncan Hunter was present at the rally and spoke at length as a proponent of a new border wall and increased border security.

"The border fence that we have here in San Diego is the only border fence in the entire country," Rep. Hunter said. "You had crime reduced by 50 percent overnight and drugs reduced in San Diego by over 90 percent. Fences make good neighbors. Period."