Former San Diego Mayor Bob Filner, who pleaded guilty to grabbing and fondling three women while in office, will be sentenced Monday. 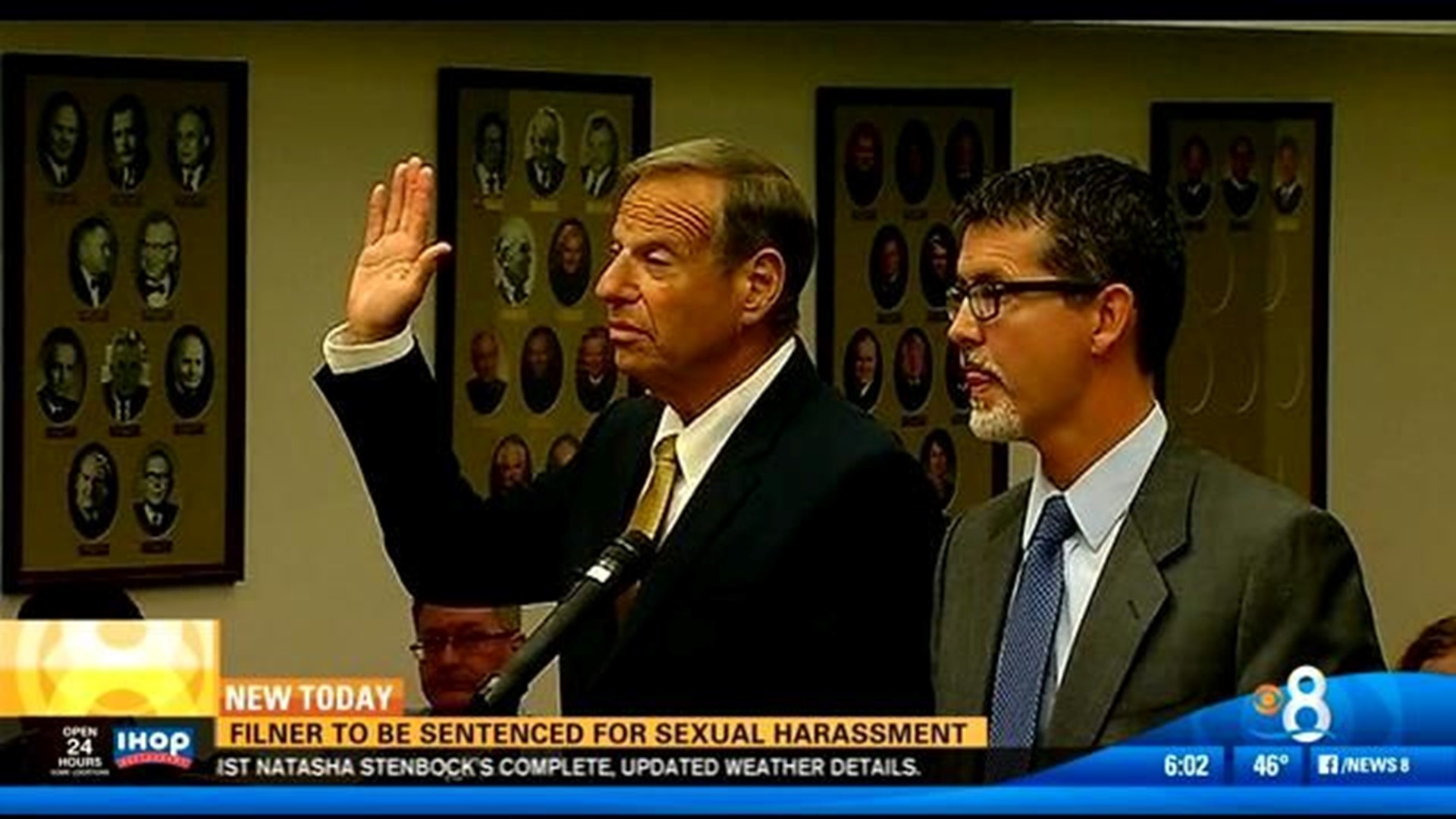 SAN DIEGO (AP) — When he was mayor of San Diego, Bob Filner waited to be alone with women to kiss, grope and manhandle them without any witnesses, according to a probation officer's report released after he was sentenced Monday to home confinement.

Filner, 71, apologized and told the judge he would try to earn the trust of those he betrayed and recover his integrity — a sharp contrast to his defiant resignation speech nearly four months ago in which he said he was the victim of "a lynch mob."

His attorney Jerry Coughlan said Filner dropped mood-altering medications when he became mayor. That, combined with the stress of leading the nation's eighth-largest city, substantially contributed to Filner's behavior, Coughlan wrote to the judge.

Superior Court Judge Robert Trentacosta sentenced Filner to three months of home confinement and three years of probation — the same punishment that prosecutors had recommended in a plea agreement reached in October.

"I want to apologize to my family, who have stood by me through this ordeal, to my loyal staff and supporters, the citizens of San Diego and most sincerely to the women I have hurt and offended," Filner told the judge in a brief statement. "Certainly the behaviors before this court today will never be repeated."

Filner had faced a maximum possible penalty of three years in prison for a felony count of false imprisonment and one year in jail for each of two misdemeanor counts of battery.

The former 10-term congressman cannot seek or hold elected office while on probation and will be monitored by GPS during home confinement, which begins Jan. 1.

The three victims in the complaint, who were not named, declined to attend the sentencing and didn't seek restitution, according to the probation report. One said she wished Filner would be sentenced to three months in jail and would leave San Diego, while the others had no opinion on an appropriate punishment.

Nearly 20 women have publicly identified themselves as targets of Filner's unwanted advances, including kissing, groping and requests for dates. His accusers include a retired Navy rear admiral, a San Diego State University dean and a great-grandmother who volunteers her time to answer the questions of senior citizens at City Hall.

Filner, who is twice divorced, pleaded guilty to the felony for what the probation report described as putting a woman in a headlock after a dinner party on March 6 and attempting to kiss her on the lips. The woman, identified as a longtime Filner acquaintance, told authorities that he kissed her eye and she elbowed him to get free.

He pleaded guilty to a misdemeanor for kissing a woman on the lips without permission at a "Meet the Mayor" event on April 6, according to the probation report. The woman, who came to report alleged financial improprieties, told authorities the mayor had asked an aide to leave the curtain-shielded cubicle where they met.

The other misdemeanor involved grabbing another woman's buttocks at a May 25 rally to clean up Fiesta Island in Mission Bay. The probation report says the woman was posing with the mayor for a photograph taken by her mother.

"Clearly, the defendant's efforts to avoid detection by witnesses suggest he was aware his behaviors and intended actions were wrong and most certainly inappropriate," Charles Ledbetter, a San Diego County senior probation officer, wrote in his report.

Filner disappeared from public view after leaving office Aug. 30, less than nine months into a four-year term. His attorney said Filner has been jogging daily, attending two counseling sessions a week and relying on family for moral support. He said Filner hoped to write about his experiences as a 1960s civil rights activist and member of Congress.

Filner was undergoing psychiatric counseling and taking medications prescribed by congressional doctors "to help stabilize his mood and safeguard his mental health," but he dropped medications after becoming mayor, Coughlan wrote to the judge. The attorney didn't elaborate on Filner's mental health issues in his memo and didn't immediately respond to a phone message seeking further comment.

The charges do not involve Filner's former communications director, Irene McCormack Jackson, who expedited the mayor's downfall by becoming the first to go public with sexual harassment allegations in July. She sued Filner and the city, claiming her boss asked her to work without panties, demanded kisses and dragged her in a headlock.