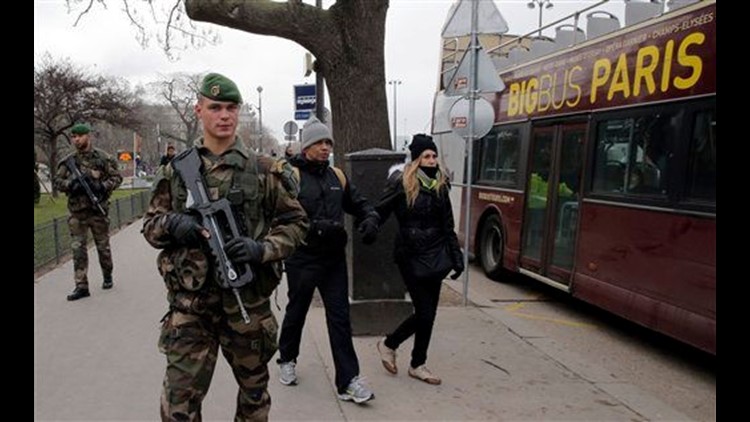 The spokeswoman for the Paris prosecutor says the editor and a cartoonist for the satirical French newspaper targeted by gunmen are among the 12 people killed in the attack.
Author: Richard Allyn (Reporter)
Published: 1:15 AM PST January 7, 2015
Updated: 6:14 PM PST January 7, 2015
PARIS (AP) -- French Prime Minister Manuel Valls says there were "several arrests" overnight in the hunt for two suspects in the deadly shooting at a satirical newspaper.

In an interview with RTL radio Thursday, Valls said preventing another attack "is our main concern," as he explained why authorities released photos of the two men along with a plea for witnesses to come forward.

Twelve people died in the attack on the offices of Charlie Hebdo, a weekly newspaper that had been threatened before for its caricatures of the Prophet Muhammed. France declared a national day of mourning on Thursday.

THIS IS A BREAKING NEWS UPDATE. Check back soon for further information. AP's earlier story is below.

Police hunted Thursday for two heavily armed men, one with possible links to al-Qaida, in the methodical killing of 12 people at a satirical newspaper that caricatured the Prophet Muhammed. France began a day of national mourning for what its president called "an act of exceptional barbarism."

One of the suspects, Cherif Kouachi, was already known to French intelligence services, with a history of funneling jihadi fighters to Iraq and a terrorism conviction from 2008. He and his brother, Said, should be considered "armed and dangerous," French police said in a bulletin early Thursday, appealing for witnesses after a fruitless search in the city of Reims, in French Champagne country.

A third man, Mourad Hamyd, 18, surrendered at a police station in a small town in the eastern region after learning his name was linked to the attacks in the news and social media, said Paris prosecutor's spokeswoman Agnes Thibault-Lecuivre. She did not specify his relationship to the Kouachi brothers.

France raised its terror alert system to the maximum and bolstered security with more than 800 extra soldiers to guard media offices, places of worship, transport and other sensitive areas. A nationwide minute of silence was planned for noon.

Fears had been running high in Europe that jihadis trained in warfare abroad would stage attacks at home. The French suspect in a deadly attack on a Jewish museum in Belgium had returned from fighting with extremists in Syria; and the man who rampaged in the south of France in 2012, killing three soldiers and four people at a Jewish school in Toulouse, received paramilitary training in Pakistan.

One witness to Wednesday's attack said the gunmen were so methodical he at first mistook them for an elite anti-terrorism squad. Then they fired on a police officer.

The masked, black-clad men with assault rifles stormed the offices near Paris' Bastille monument in the Wednesday noontime attack on the publication, which had long drawn condemnation and threats - it was firebombed in 2011 - for its depictions of Islam, although it also satirized other religions and political figures.

The staff was in an editorial meeting and the gunmen headed straight for the paper's editor, Stephane Charbonnier - widely known by his pen name Charb - killing him and his police bodyguard first, said Christophe Crepin, a police union spokesman.

Shouting "Allahu akbar!" as they fired, the men used fluent, unaccented French as they called out the names of specific employees.

Eight journalists, two police officers, a maintenance worker and a visitor were killed, said prosecutor Francois Molins. He said 11 people were wounded - four of them seriously.

Two gunmen strolled out to a black car waiting below, one of them calmly shooting a wounded police officer in the head as he writhed on the ground, according to video and a man who watched in fear from his home across the street.

"They knew exactly what they had to do and exactly where to shoot. While one kept watch and checked that the traffic was good for them, the other one delivered the final coup de grace," said the witness, who refused to allow his name to be used because he feared for his safety.

"Hey! We avenged the Prophet Muhammad! We killed Charlie Hebdo," one of the men shouted in French, according to video shot from a nearby building.

One police official, speaking on condition of anonymity because the investigation was ongoing, said they were linked to a Yemeni terrorist network, and Cedric Le Bechec, a witness who encountered the escaping gunmen, quoted the attackers as saying: "You can tell the media that it's al-Qaida in Yemen."

After fleeing, the attackers collided with another vehicle, then carjacked another car before disappearing in broad daylight, Molins said.

The other dead were identified as cartoonists Georges Wolinski and Berbard Verlhac, better known as Tignous, and Jean Cabut, known as "Cabu." Also killed was Bernard Maris, an economist who was a contributor to the newspaper and was heard regularly on French radio.

One cartoon, released in this week's issue and titled "Still No Attacks in France," had a caricature of a jihadi fighter saying "Just wait - we have until the end of January to present our New Year's wishes." Charb was the artist.

Le Bechec, the witness who encountered the gunmen in another part of Paris, described on his Facebook page seeing two men "get out of a bullet-ridden car with a rocket-launcher in hand, eject an old guy from his car and calmly say hi to the public, saying `you can tell the media that it's al-Qaida in Yemen.'"

In a somber address to the nation Wednesday night, French President Francois Hollande pledged to hunt down the killers, and pleaded with his compatriots to come together in a time of insecurity and suspicion.

Thousands of people later jammed Republique Square near the site of the shooting to honor the victims, waving pens and papers reading "Je suis Charlie" - "I am Charlie." Similar rallies were held in London's Trafalgar Square as well as Madrid, Barcelona, Berlin and Brussels.

"This is the darkest day of the history of the French press," said Christophe DeLoire of Reporters Without Borders.

Both al-Qaida and the Islamic State group have repeatedly threatened to attack France, which is conducting airstrikes against extremists in Iraq and fighting Islamic militants in Africa. Charb was specifically threatened in a 2013 edition of the al-Qaida magazine Inspire, which also included an article titled "France the Imbecile Invader."

Cherif Kouachi, now 32, was sentenced to 18 months in prison after being convicted of terrorism charges in 2008 for helping funnel fighters to Iraq's insurgency. He said he was outraged at the torture of Iraqi inmates at the U.S. prison at Abu Ghraib near Baghdad and "really believed in the idea" of fighting the U.S.-led coalition in Iraq.

A tweet from an al-Qaida representative who communicated Wednesday with The Associated Press said the group was not claiming responsibility for the attack, but called it "inspiring."