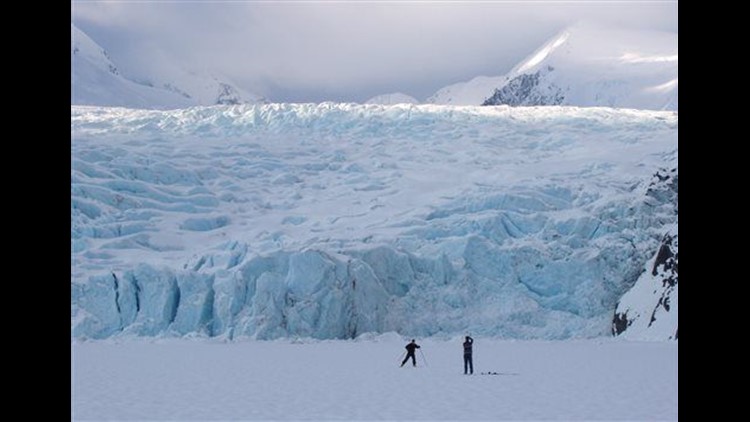 Global warming carving changes into Alaska in fire and ice

Global warming carving changes into Alaska in fire and ice

ANCHORAGE, Alaska (AP) — Global warming is carving measurable changes into Alaska, and President Barack Obama is about to see it.

Obama leaves Monday for a three-day visit to the 49th state in which he will speak at a State Department climate change conference and become the first president to visit the Alaska Arctic. There, and in the sub-Arctic part of the state, he will see the damage caused by warming — damage that has been evident to scientists for years.

More than 3.5 trillion tons of water have melted off of Alaska's glaciers since 1959, when Alaska first became a state, studies show — enough to fill more than 1 billion Olympic-sized pools.

The crucial, coast-hugging sea ice that protects villages from storms and makes hunting easier is dwindling in summer and is now absent each year a month longer than it was in the 1970s, other studies find. The Army Corps of Engineers identified 26 villages where erosion linked to sea ice loss threatens the communities' very existence.

Permafrost is thawing more often as the ground warms, so as the ground oozes, roads, pipelines and houses' foundations tilt and shift — sometimes enough to cause homes to be abandoned. In far northern Barrow, the upper part of the ground is 7 degrees warmer than it was in the late 1950s and getting closer to the melt point in the summer, data shows. And scientists fear the thawing permafrost will unleash large amounts of trapped greenhouse gases and speed up worldwide warming.

So far this year, more than 5.1 million acres in Alaska — an area the size of Connecticut and Rhode Island combined — have burned in wildfires. In the first 10 years of statehood, Alaska averaged barely a quarter million acres of wildfires yearly. The last 10 years have averaged 1.2 million acres.

And scientists say those things are happening — at least partly and probably mostly — because of another thing they can measure: Alaska's temperature. Alaska's yearly average temperature has jumped 3.3 degrees since 1959 and the winter average has spiked 5 degrees since statehood, according to federal records. Last year was the hottest on record and so far this year Alaska is a full degree warmer than last year.

Alaska "is sort of a bellwether," said John Walsh, chief scientist of the International Arctic Research Center at the University of Alaska Fairbanks. "The changes are definitely happening and we're out in front of the rest of the country."

And what happens in Alaska isn't staying in Alaska, because weather changes in the Arctic trigger changes in the jet stream and reverberate down south, including the dreaded polar vortex escape that has brought sub-freezing temperatures to great expanses of North American in recent winters, said Martin Jeffries, an Arctic scientist for the U.S. Office of Naval Research.

Warming's effects seem to be speeding up. From 1959 to 1993, Alaska's glaciers lost 57 billion tons of ice a year, but that jumped to almost 83 billion tons a year since 1994, according to Anthony Arendt, who co-authored a study on the subject this July.

And while there may be many factors involved in glacier melt, all but about five of Alaska's 25,000 glaciers are shrinking, said University of Alaska Fairbanks glacier expert Regine Hock. She's adamant: "That's related to climate change."

On the ocean, sea ice in the Arctic in the summer has shrunk by about one-third over three decades, leading to a loss of habitat for walrus and a threatened species listing for polar bears and their main prey, ringed seals. But in Alaska, what really hits hard is the loss of sea ice that's connected to the coast. That's the icethat protects villages from the worst of storms and allows both people and animals to hunt more at sea. But that type of ice is disappearing two weeks earlier in the summer and returns two weeks later when compared to the 1970s, geophysicist Andy Mahoney at the University of Alaska Fairbanks.

Meanwhile, Alaska's wildfires are "more frequent, they're hotter and they're more severe," said Glenn Juday, a professor emeritus of forest ecology at the University of Alaska Fairbanks.

Rapid and sustained warming has led to new patterns of insect outbreaks and new pest species affecting trees, he said. One of the chief problems is the spruce bark beetle, which thrive under warmer conditions. By 2006, aerial surveys had found spruce bark beetles had killed mature white spruce trees on 4.4 million acres following mild winters and hot summers. The acreage has increased since then, though not dramatically.

Wildlife has changed, too. George Divoky and others have been tracking how early the black guillemot bird lays its first egg on far north Cooper Islands. In the 1970s they used to lay their eggs around June 25. The last five years, the average has been June 15 and this year it was June 8.

The U.S. Geological Survey has found a host of other animals changing their habits with warmer weather, including pink salmon, trumpeter swans, and caribou. It's a problem because sometimes the plants and animals don't quite match up — caribou, for example, born before the plants they eat, according to the USGS.

The record warmth this spring has "turned the state into a melting pot, almost literally," said Jake Weltzin, who runs the USGS program tracking changes in plant and animal timing. "It's an enormous experiment."

Seth Borenstein can be followed at http://twitter.com/borenbears