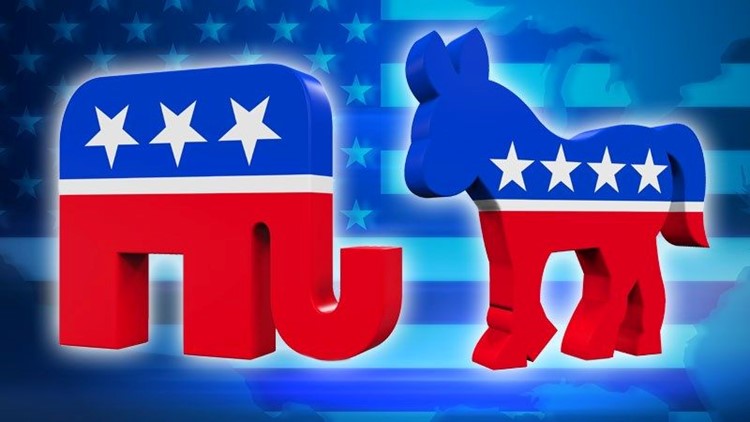 LOS ANGELES (AP) — If history is any guide, this weekend's California Republican convention will be another prelude to Election Day disappointment.

With the June 5 primary closing in, hundreds of party delegates will spend the weekend in San Diego debating endorsements for candidates seeking statewide offices that are all held by Democrats.

For the GOP, the outlook is challenging.

Republican registration numbers continue to slide in the state — currently, an anemic 25 percent of the total — and the party could soon suffer the indignity of being eclipsed by independents in voter enrollments.

Democrats hold a 3.6-million-voter edge statewide, putting Republicans at a disadvantage from the start.

The GOP has no viable candidate for U.S. Senate, essentially ceding the race to Democrats. In the race for governor, it's possible the GOP's leading candidates, John Cox and Travis Allen, could split the Republican vote and allow two Democrats to advance to the November runoff.

"The ability of the Republican Party to put on a statewide campaign is severely limited," conservative activist and blogger Steve Frank said.

A string of Republican-held congressional districts that were carried by Hillary Clinton in 2016 are under threat. President Donald Trump isn't on the ballot, but he is unpopular in the state and could energize Democrats and keep moderate Republicans at home.

Another troubling sign: Republicans don't even have candidates for six of 20 state Senate seats being contested. Meanwhile, there are so few Republicans in the Legislature that the party is largely irrelevant.

At this point, the party is fighting to hold its ground.

Republicans have opened a headquarters in the one-time Republican fortress of Orange County to help defend four endangered congressional seats there.

Party leaders believe a buoyant economy will win over voters. And they hope backlash against illegal immigration and a proposed gas-tax repeal in November will draw supporters to the polls.

Party leaders have been pumping money into the effort to get the tax repeal on the November ballot.

Meanwhile, Republican elected officials in a string of cities and Orange and San Diego counties have passed ordinances or taken other actions in opposition to the state's so-called sanctuary law for immigrants, enacted by the Democratic-run Legislature in response to Trump's calls for more deportations and a wall on the U.S.-Mexico border.

Rep. Steve Stivers, an Ohio Republican who heads the party's campaign arm in the House, said GOP candidates will benefit from the economic upswing and the party's emphasis on safety and security.

"Sometimes you kind of have to go down before you come back up," Stivers said, when asked about the party's struggles in California.

Speaking in Beverly Hills on Wednesday, House Speaker Paul Ryan acknowledged that a president's party typically loses seats in midterm elections, but he emphasized that party data show the GOP would hold the House if the election were now. But, Ryan added, "There's a great amount of enthusiasm on the other side of the aisle."

California was once known as a launching pad for national Republican candidates such as Richard Nixon and Ronald Reagan. But a surge in immigrants transformed the state and its voting patterns. The number of Hispanics, blacks and Asians combined has outnumbered whites since 1998. And the state's new voters, largely Latinos and Asians, lean Democratic.

The last Republican presidential candidate to carry the state was George H.W. Bush, in 1988.

California Republicans have bickered for years over what direction to turn — toward the political center or to the right.

In March, former Republican Gov. Arnold Schwarzenegger, a centrist, urged the party to adopt a more inclusive tone and work with Democrats on health care, immigration and climate change. The remarks came at an event organized by New Way California, a political committee eager to reshape the California GOP.

New Way California was formed by Republican state lawmaker Chad Mayes, who was ousted as the party's Assembly leader after he worked with Democrats on climate change legislation.

Mayes, a conservative, said the group hoped to "shed the stereotype of an intolerant Republican Party that serves only the rich and big businesses."

Stivers is optimistic the party can finally regain its footing in California.

"I feel really good about what we are doing to rebuild our brand," he said.