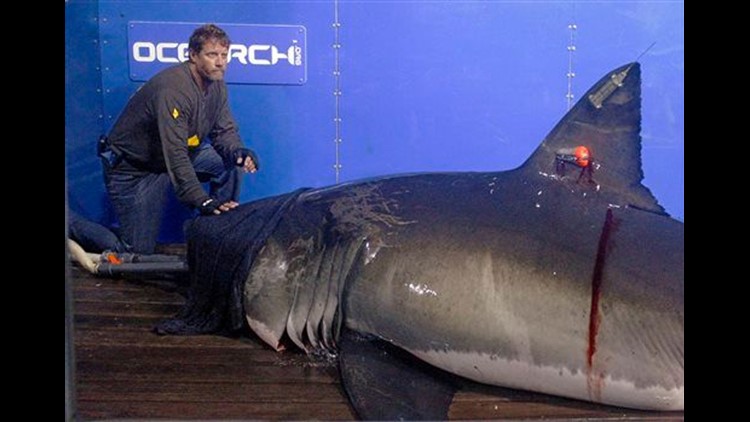 An organization studying great white sharks is enjoying some welcome attention after one of the creatures they've been monitoring started gaining a loyal social media following. @MaryLeeShark is the fake Twitterhandle for a very real, nearly 3,500-pound great white whose movements can be tracked online and in real time.

She's drawn over 44,000 followers with her playful updates and witty replies as real life shark cruises up and down the East Coast.

"Oh heyyyyy.... you're right by my house, come by for a nightcap?" invited one recent Twitter commenter as she popped up off the coast of Long Island, New York.

"I would settle for an ice bag to put on my aching Twitter fin. -:()" Mary Lee replied.

"What do you do during Shark Week?" another recent commenter asked. "Swim. Eat. Tweet. Etc. Exhausting. -;()," Mary Lee responded.

The shark, which was tagged off the coast of Cape Cod, is among hundreds of sharks that OCEARCH, a Utah-based organization, has tagged and tracked since 2007.

"They're really clever, they really like sharks and they're on mission, so we're just kind of rolling with it," he said from the organization's latest expedition in Australia.

OCEARCH has even jumped on the bandwagon, launching "official" Twitter handles for two other sharks it's monitoring off the East Coast. @Shark_Katharine and @RockStarLydia both have sizable followings of their own.

The person behind the @MaryLeeShark account did surface when The Associated Press sent a Twittermessage.

The account's operator identified themselves only as a daily newspaper reporter living on the East Coast and expressed pleasant surprise at the attention — and OCEARCH's support.

"The recent explosion of followers has been a lot of fun, but also like a second job. I do everything manually - no robo tweets," the account owner wrote. "The best part is that (@MaryLeeShark) plays a role in helping to replace fear with facts by retweeting and commenting on @OCEARCH tweets. I (try) to be respectful of the important work OCEARCH does and have fun at the same time."

OCEARCH's multi-year project uses GPS trackers affixed to the shark's dorsal fin to post real time data on dozens of great whites across the globe — Mary Lee was hanging out near Ocean City, Maryland on Sunday, for example — with the goal of better understanding the shark's life cycle and encouraging conservation of the endangered ocean predators.

Shark researchers say the work is important because there's still a lot unknown about the behavior of maturewhite sharks. The massive beasts are extremely difficult to tag with modern GPS trackers that would help closely track their movements.

OCEARCH is one of the few outfits with the technology, skill and resources for the job. The organization operates largely on corporate funding and its crew consists of professional fisherman-turned-ocean explorers.

"This gives us a much better understanding of the movement patterns of these animals through days, months and years," says Robert Hueter, director of the Center for Shark Research at Mote Marine Laboratory and Aquarium in Sarasota, Florida.

Gregory Skomal, a marine biologist who heads the Massachusetts Shark Research Program, says the research is of particular interest along the densely populated East Coast, where great whites are being spotted with greater frequency.

The sharks are increasingly drawn to places like Cape Cod and its surrounding islands, whose seaside communities are forever linked with "Jaws," because seal populations have soared.

"Basically the cafe is open and the customers are arriving," Skomal said. "Ten or fifteen years ago, you might have had three to four sightings of white sharks off the coast of Massachusetts a year. Now we're getting well over 30 or 40."

The researchers are reluctant to draw quick conclusions about great white behavior based on the fewEast Coast great whites OCEARCH is tracking.

Some, like Mary Lee, have hued relatively close to the shore, to the delight and alarm of Twitter followers. Others have ventured far into the Atlantic.

Shark fans say they've found the tongue-in-cheek tweets fun and informative. Many hope the attention helps overcome fears and misconceptions about the powerful but endangered creatures.

"People need to think about them not so much as a predator and something to be feared, but more as something that needs to be protected," said Teri Drake-Floyd, an Athens, Georgia resident who recently started following @MaryLeeShark. "The ocean is their home, not ours, and so it's kind of our responsibility to look out for them."