Deaths have exploded since a COVID-19 surge began in October. It took the state six months to record its first 10,000 deaths.

Credit: AP
FILE - In this June 26, 2020, file photo, California Gov. Gavin Newsom listens to a reporter's question during a news conference in Rancho Cordova, Calif. Gov. Newsom is facing a possible recall election as the nation's most populous state struggles to emerge from the coronavirus crisis. Organizers say they have collected more than half of the nearly 1.5 million petition signatures needed to place the recall on the ballot. (AP Photo/Rich Pedroncelli, Pool, File)
Author: City News Service
Published: 11:23 AM PST January 11, 2021

SAN DIEGO — San Diego County public health officials have reported 3,288 new COVID-19 infections and 33 additional deaths from the virus as of Sunday and as California hits another grim coronavirus milestone, Governor Newsom held a press conference to give an update on the state's coronavirus status. Data from Johns Hopkins University on Monday showed the nation's most populous state has recorded more than 30,000 deaths since the pandemic started nearly a year ago.

Deaths have exploded since a COVID-19 surge began in October. It took the state six months to record its first 10,000 deaths. But in barely a month the total rose from 20,000 to 30,000. Over the weekend, the state reported a two-day record of 1,163 deaths. Hospitalizations also have exploded and many hospitals are stretched to the limit. Health officials have warned the worst is yet to come later this month.

Hospitalizations resulting from the virus rose another 32 to a total of 6,238 on Sunday. There were four new intensive care admissions, bringing the total to 1,271.

The county has surpassed 80% of its hospital beds occupied, a significant number due to the county reserving the last 20% of its licensed beds exclusively for COVID-19 patients. New patients, according to a plan developed by the county HHSA last year, could be turned away in some cases.

The HHSA reported a 89% increase in COVID-19 hospitalizations in the last 30 days and a 67% increase in ICU admittance in the same period.

Supervisor Nathan Fletcher said Wednesday it's likely the number of hospitalizations will continue to increase due to the 21-24 day "lag" period between rising cases and rising hospitalizations.

Another six community outbreaks were reported Sunday. There have been 43 outbreaks in the last seven days, tied to 178 cases.

County health officials attribute the increasing number of cases, hospitalizations and deaths to gatherings over the holidays and the presence of the new coronavirus variant known as B.1.1.7. first detected in the United Kingdom.

The county reported 24 confirmed diagnoses of the more virulent strain of the virus on Tuesday, bringing the county's confirmed cases of the variant to 28.

The cases were confirmed by whole genome sequencing and the four probable cases are directly linked to the confirmed cases and have positive diagnostic nucleic acid tests, but are not yet sequenced.

There have been no confirmed deaths locally connected to the variant. 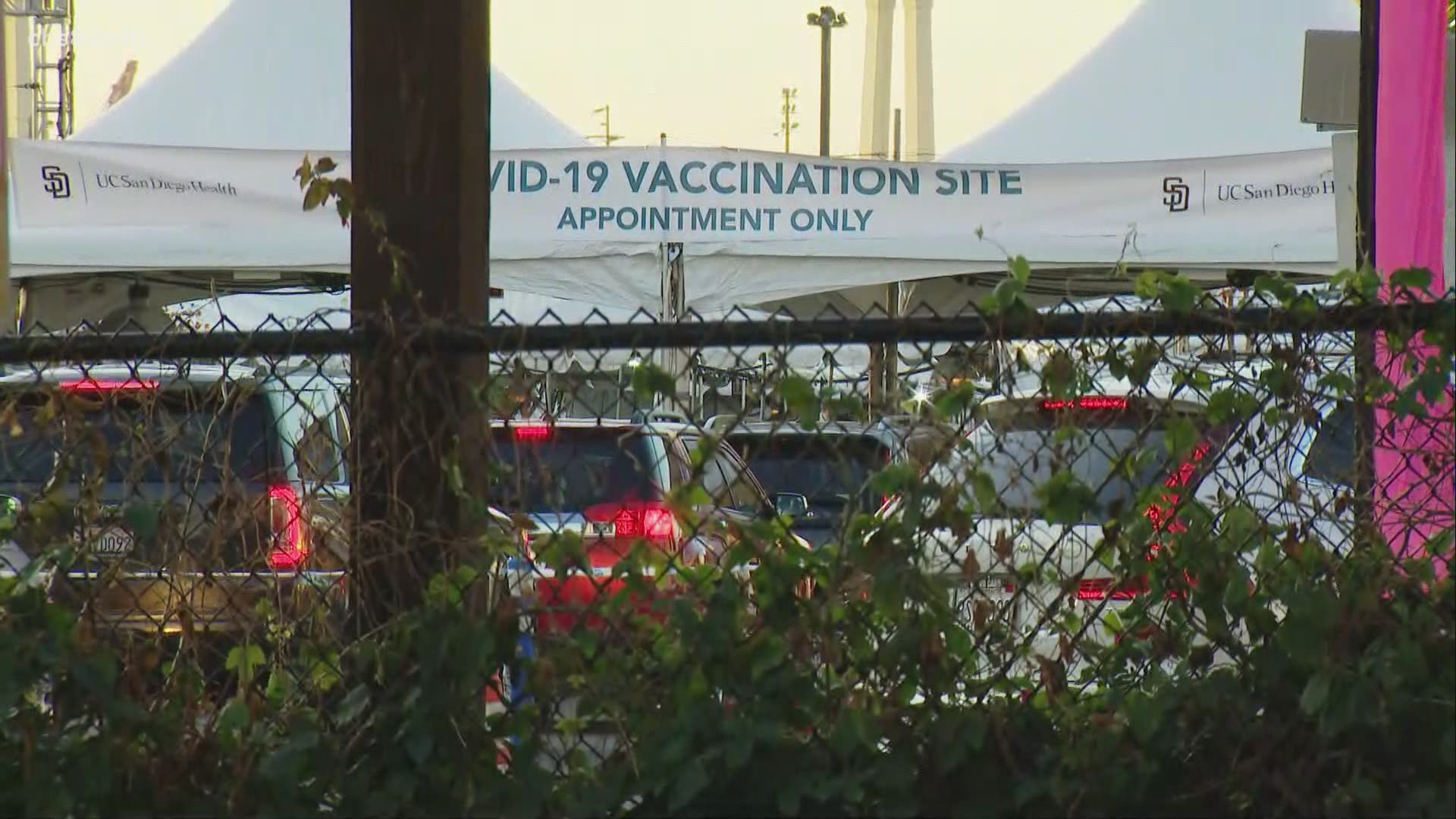 RELATED: US ramps up vaccinations to get doses to more Americans