Capt. Brett Cozier of the USS Theodore Roosevelt wrote in a letter hat the COVID-19 infection aboard the ship would spiral if immediate action was not taken. 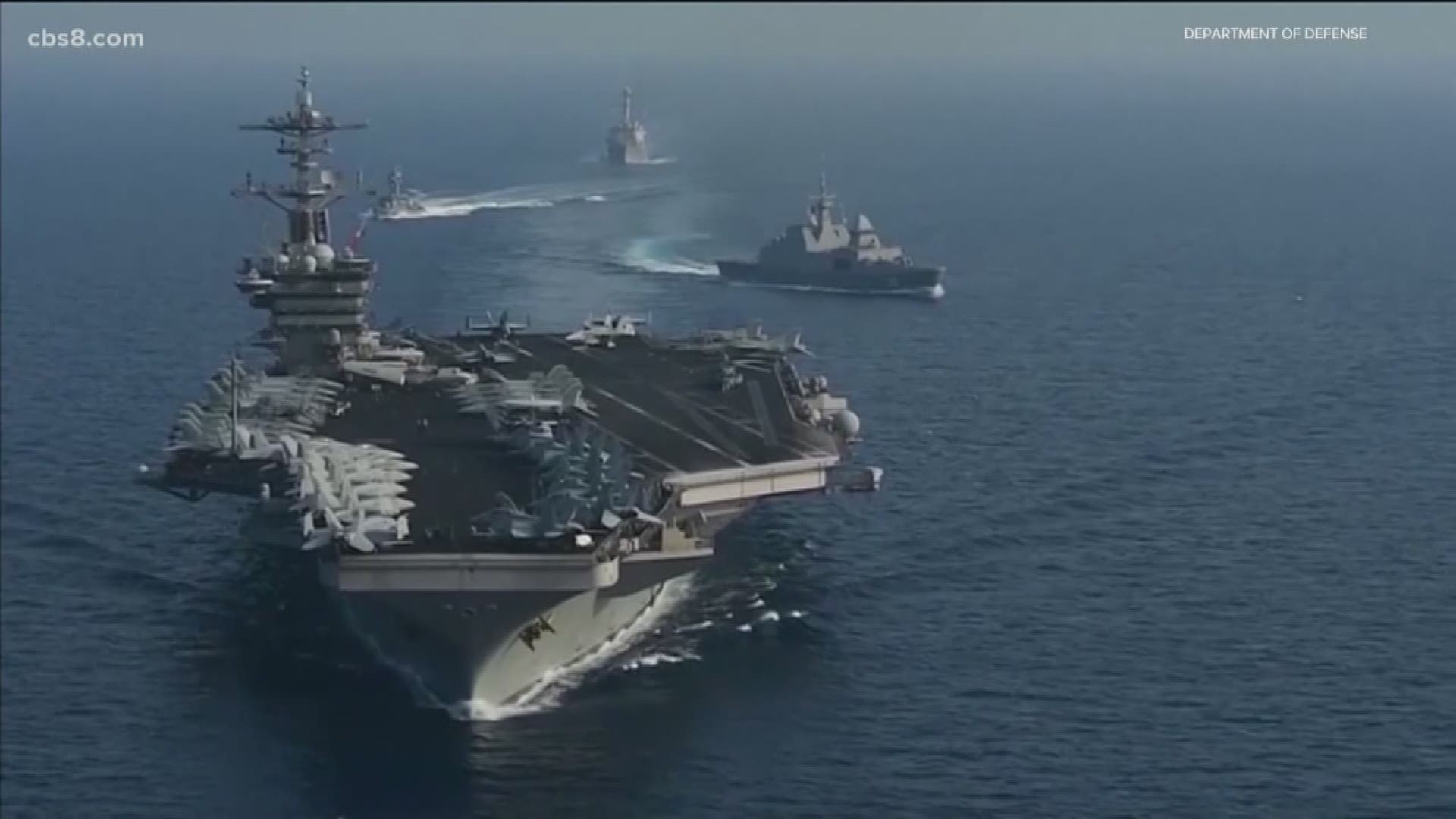 SAN DIEGO — The captain of a San Diego-based nuclear aircraft carrier docked in Guam has asked the Navy for more resources and "decisive action" as the ship's crew battles a coronavirus outbreak among its sailors, with a military official saying Tuesday that the Navy was working to address the captain's concerns.

Capt. Brett Cozier of the USS Theodore Roosevelt wrote in a letter obtained by News 8 that the COVID-19 infection aboard the ship would spiral if immediate action was not taken, which included removing the majority of the crew from the ship.

Admiral John Aquilino of the U.S. Pacific Fleet told News 8 that none of the sailors who have coronavirus are in the hospital and none have required the use of ventilators.

He refused say how many sailors have the virus and would not go into specifics about the plan to care for them, but said, "We're welcoming feedback. This crisis is dynamic and we want to make sure we understand exactly what the leader on the ground needs."

The number of infected sailors aboard is unclear, per recent Navy changes to publicly reporting COVID-19 cases aboard its ships, but Crozier wrote that at least 33 sailors were initially diagnosed among the crew of more than 4,000.

The captain wrote that the ship's close quarters make it nearly impossible to abide by federal quarantine guidelines recommending at least 14 days of isolation for anyone with COVID-19 symptoms.

"The spread of the disease is ongoing and accelerating," Crozier wrote.

The captain said some measures the crew has undertaken include moving a small percentage of the crew off-ship, increasing cleaning of the ship and attempting social distancing wherever possible.

However, he warns, "The current strategy will only slow the spread. The current plan in execution on TR will not achieve virus eradication on any timeline."

Crozier wrote that the ship has only two courses of action: immediately reduce the number of sailors onboard or "maximize warfighting readiness and capacity as quickly as possible."

He advised that off-ship lodging in compliance with U.S. Centers for Disease Control and Navy standards be provided for the majority of the crew, who should be isolated for two weeks.

Meanwhile, about 10 percent of the sailors remain onboard "to run the reactor plant, sanitize the ship, ensure security, and provide for contingency response to emergencies."

"The virus would certainly have an impact, but in combat we are willing to take certain risks that are not acceptable in peacetime. However, we are not at war, and therefore cannot allow a single sailor to perish as a result of this pandemic unnecessarily," the letter reads. "Decisive action is required now in order to comply with CDC and NAVADMIN 083/20 guidance and prevent tragic outcomes."

Modly said, "I know that our command organization has been aware or this for about 24 hours and we have been working actually the last seven days to move those sailors off the ship and get them into accommodations in Guam. The problem is that Guam doesn't have enough beds right now and were having to talk to the government there to see if we can get some hotel space, create tent- type facilities.

"We don't disagree with the (Commanding Officer) on that ship and we're doing it in a very methodical way because it's not the same as a cruise ship, that ship has armaments on it, it has aircraft on it, we have to be able to fight fires if there are fires on board the ship, we have to run a nuclear power plant, so there's a lot of things that we have to do on that ship that make it a little bit different and unique but we're managing it and we're working through it," he added.

"We're very engaged in this, we're very concerned about it and we're taking all the appropriate steps."