Up to 26K devices were recorded on the Strip in July with visitors coming from almost every state in the continental U.S. with the bulk of visitors from So Cal. 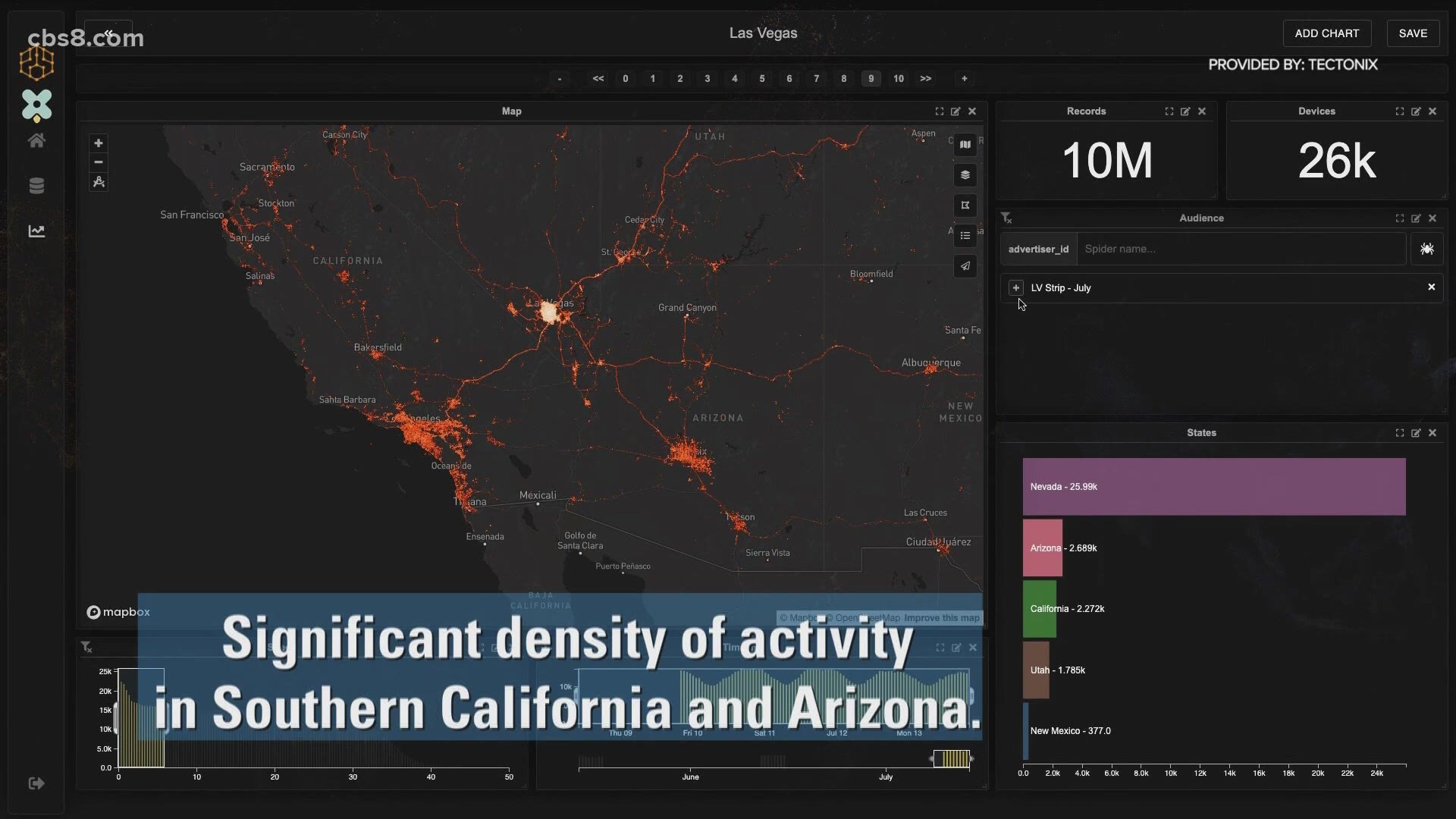 Health experts continue to monitor Las Vegas for coronavirus outbreaks after its casinos reopened in June. A new analysis of anonymous cell phone data compiled by X-Mode and visualized by Tectonix showed an ever-increasing number of people traveling to the Las Vegas Strip from Southern California.

In May, analysts found roughly 13,000 users near the Strip between a Friday and Monday in mid-May with some travel to cities in the Southwestern U.S. The number of devices nearly doubled to 24,000 during a similar four-day period in mid-June after casinos reopened with a significant number then traveling to Southern California.

Up to 26,000 devices were recorded on the Strip in July with visitors coming from almost every state in the continental U.S. Although the bulk of interstate visitors traveled from Southern California.

“It's always a little shocking to see what those actual numbers look like,” said Mike DiMarco, Chief Marketing Officer at Tectonix. “When you look at that kind of data, you can start to draw conclusions such as Las Vegas was a natural outlet for people to get away and you can drive there and be able to actually sort of get some semblance of your of your life back.”

There is no national coronavirus contact tracing system, which has forced jurisdictions to compile their own methods for sharing results to determine outbreaks.

San Diego County estimates roughly 10% of all cases are people who live in other counties. It also receives daily reports from other states and counties when a San Diego resident tests positive elsewhere.

“In each of those cases we're reaching out through the state, or if it's one of our neighboring counties we work directly with those jurisdictions, in order to do the joint investigations,” said Eric McDonald, M.D., M.P.H., San Diego County’s Deputy Public Health Officer, who leads the Epidemiology and Immunization Services Branch.

X-Mode’s anonymized data was obtained through apps where users consented to allow location sharing. Analysts looked at how many people were on the Las Vegas Strip and then observed what cities they traveled to after leaving the area.

Neither Nevada state health officials nor local county officials have released the names of casino resorts where outbreaks may be happening. Casino operators have repeatedly stressed they are taking precautions to reduce the risk of transmission including health screenings and the required use of face coverings.

Tectonix provided the visualization of where people go after leaving Las Vegas to help policymakers and health officials understand how people are traveling during the pandemic.

“I hope at least that the public health experts who use these tools that we are able to provide are not surprised by these things and are properly preparing,” said DiMarco. “When you see it actually visualize on a map there’s always a little bit of element of shock to it.”