When the state began using the new case rate formula on Aug. 31, San Diego County was the only Southern California county in Tier 2. 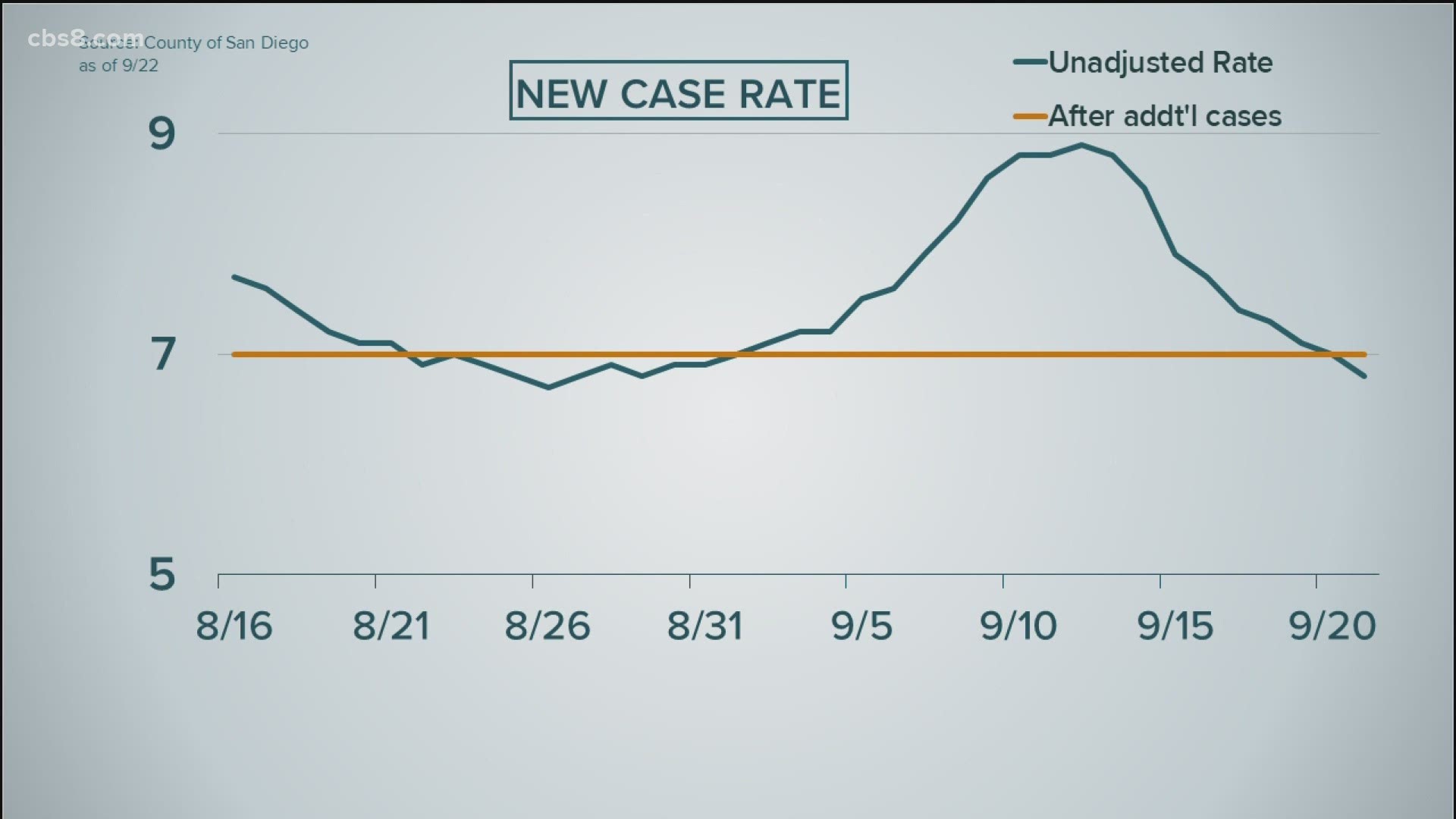 SAN DIEGO — Coronavirus is now the sixth leading cause of death among San Diego County residents this year. The Health and Human Services Agency found it displaced chronic lower respiratory disease, like COPD, and continues to rise against other causes of death.

“That's really quite concerning,” said Dr. Eric McDonald, M.D., M.P.H., who heads HHSA’s Epidemiology and Immunization Services Branch. “It's, actually, rapidly rising on accidents and I would not be surprised if it comes into the top four by the end of the year.”

Cancer, heart disease, Alzheimer’s Disease, strokes and accidents were the other leading causes of death in San Diego.

On Tuesday, the county narrowly remained in Tier 2, or red tier, for its coronavirus risk level under the state’s new metric. It had an adjusted case rate of 6.9, which includes a .1 “penalty” for doing less than the state testing median.

If the county had an adjusted rate of more than 7.1, then it would have been placed into Tier 1, or purple, which would have forced some businesses to limit capacity or move outdoors.

When the state began using the new case rate formula on Aug. 31, San Diego County was the only Southern California county in Tier 2. It had previously exceeded the metrics of the previous case rate formula by getting its rate below the 100 cases per 100,000 residents threshold needed to permit schools to reopen and have some businesses resume indoor operations.

The state then calculated the county’s rate at 5.8 on Sept. 1. Cases then continued to rise during the first few weeks of September as the fall semester began at SDSU and restrictions were loosened at businesses. A News 8 analysis of cases by episode date that were added after the state calculated the case rate found the rate was actually 7.0.

A further analysis of all late episode date results found the county only had an unadjusted rate of less than 7.1 for 11 consecutive data from Aug. 22 through Sept. 1, which means the county would still be in Tier 1 to-date if all late data were included.

Previously, the state looked at a 14-day window with a three-day lag. However, the state now only allows for a seven-day lag of data and reviews a seven-day window of cases so some of the late cases were never included and San Diego has been able to remain in Tier 2 since the new metric began.

“We've looked at this pretty closely and landed on a seven-day lag for a number of reasons so that we ensure that our data is current and reflective of what's happening currently and that we leave some space to allow us to capture test results and data that might have been lagging,” explained Dr. Mark Ghaly, Secretary of California Health and Human Services. “We want to take a look at actual levels of transmission at the moment that we're making the decisions that we are.”

While San Diego County has been penalized for conducting fewer tests compared to the state median, county health officials are hoping to receive credit for efforts in traditionally underserved communities where the virus has hit harder.

The new case rate metric is supposed to include an “equity metric,” but the formula and goals still have yet to be announced as the state continues to work with public health officers statewide.

“Those are three additional focus areas that we feel counties should get credit for if they’re doing a good job in those areas,” said Wooten.

The South Bay was hit particularly hard by coronavirus in the early weeks of the pandemic. As of Monday, San Ysidro had a case rate of 5,488 per 100,000 residents, more than four times the rate of the entire county.

The county has since rolled out several initiatives to increase testing, tracing, treatment and education to curb the spread.

The state has not released a timeline for when it may unveil its equity metric requirements and eventually factor them into a county’s case rate.

“We will pick a metric that, by focusing on not just the ‘equity metric,’ that they're really working on transmission, generally, in the county and able to facilitate the forward movement through the tiers because of that focused effort around populations that are disproportionately impacted in the data today,” said Ghaly. “We believe it's such an important metric, both in the context of COVID and all the work we're doing, but in the broad context of health equity and equity in general. The disproportionate impact on certain populations is real.”

Detectives are still investigating the att kidnapping on 9-19-20. We understand this is upsetting but it appears to be an isolated incident. We hear the concerns about the suspect bailing out w/in 24 hrs of arrest. Bail is set by the Superior Court.