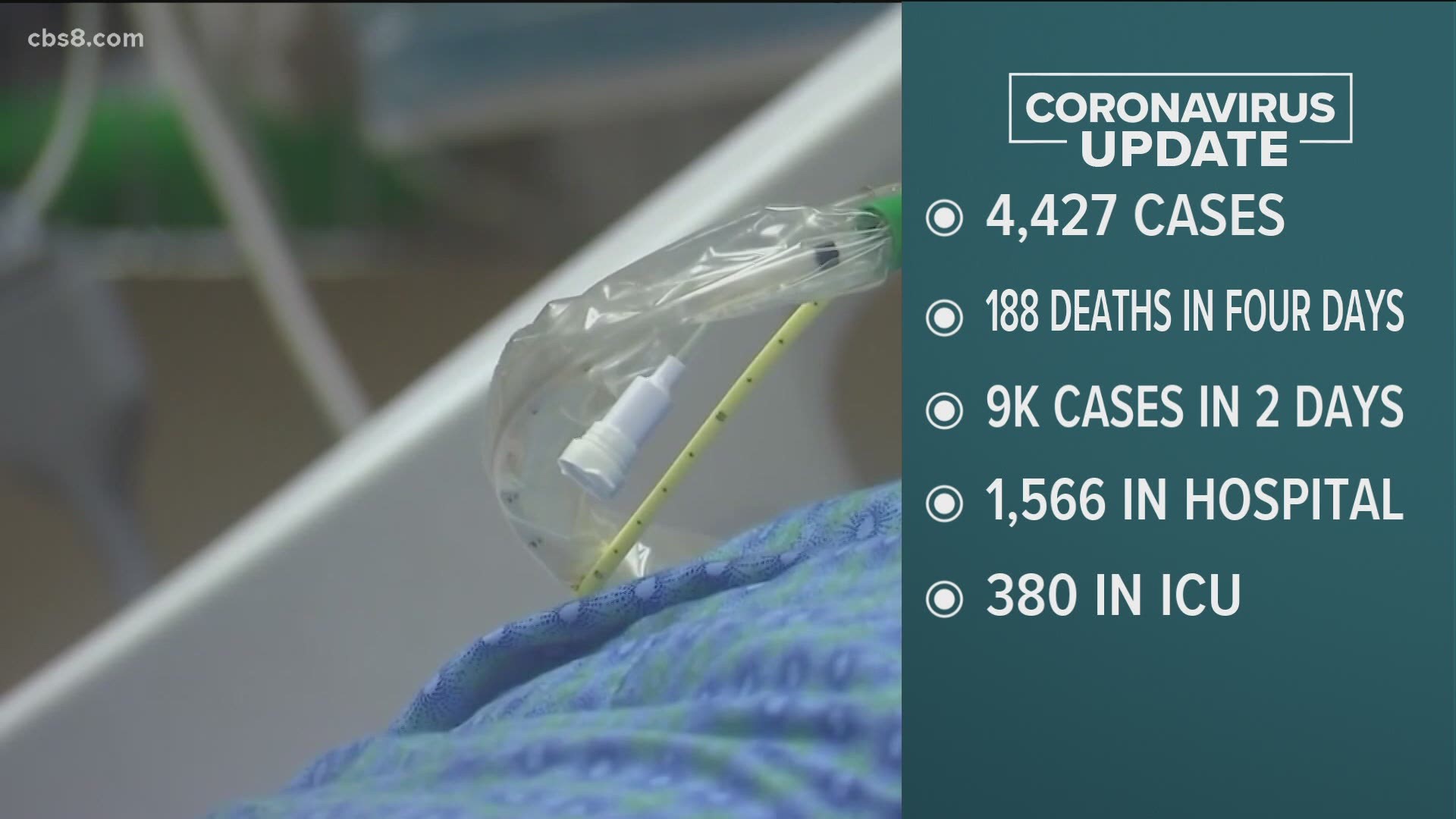 SAN DIEGO — San Diego County public health officials have reported 4,427 new cases of COVID-19 and no new deaths, bringing the county's totals to 164,500 cases and the death toll remaining at 1,592.

Those cases marked the 33rd consecutive day with more than 1,000 new infections, and the 24th overall with more than 2,000 new cases. It is the eighth time the 3,000 case mark has been crossed and the second straight day that the 4,000 threshold has been reached.

A record 4,478 cases were reported Friday.

There were 49 community outbreaks reported in the last seven days. There were 216 cases associated with those outbreaks.

The total number of cases of the new variant, known as B.1.1.7, is four so far in San Diego County. The variant was first found in the U.S. on Tuesday in Colorado. The first San Diego case is in a man in his 30s with no history of travel, who first became symptomatic Dec. 27 and tested positive Dec. 29. He has been hospitalized and contact tracing is underway.

The additional three cases, reported by county health officials Thursday, were found in two men in their 40s and one in his 50s. Contact tracing shows two men did not travel outside of the county while the third case has yet to be fully interviewed. None of the men had any known interaction with each other or the other confirmed case.

The three newly confirmed variant cases were initially identified by Helix during diagnostic testing, then confirmed by whole genome sequencing by Scripps Research. The four individuals who have tested positive for the B.1.1.7. strain live in La Mesa, Mission Beach, Otay Mesa and the Carmel Mountain/Rancho Bernardo area.

Officials now believe that the new strain is widespread in the community.

"We believe that many more cases of the B. 1.1.7. strain will be confirmed in the coming days and weeks," said Dr. Eric McDonald, medical director of the County Epidemiology and Immunizations Services branch. "This strain of the virus has been reported to be spread more easily in the U.K., and so it is therefore crucial that now more than ever before in this pandemic, we follow the public health orders and keep each other safe."