The new strain of the virus first discovered in Brazil may be more effective in resisting vaccines, said Dr. Eric McDonald. 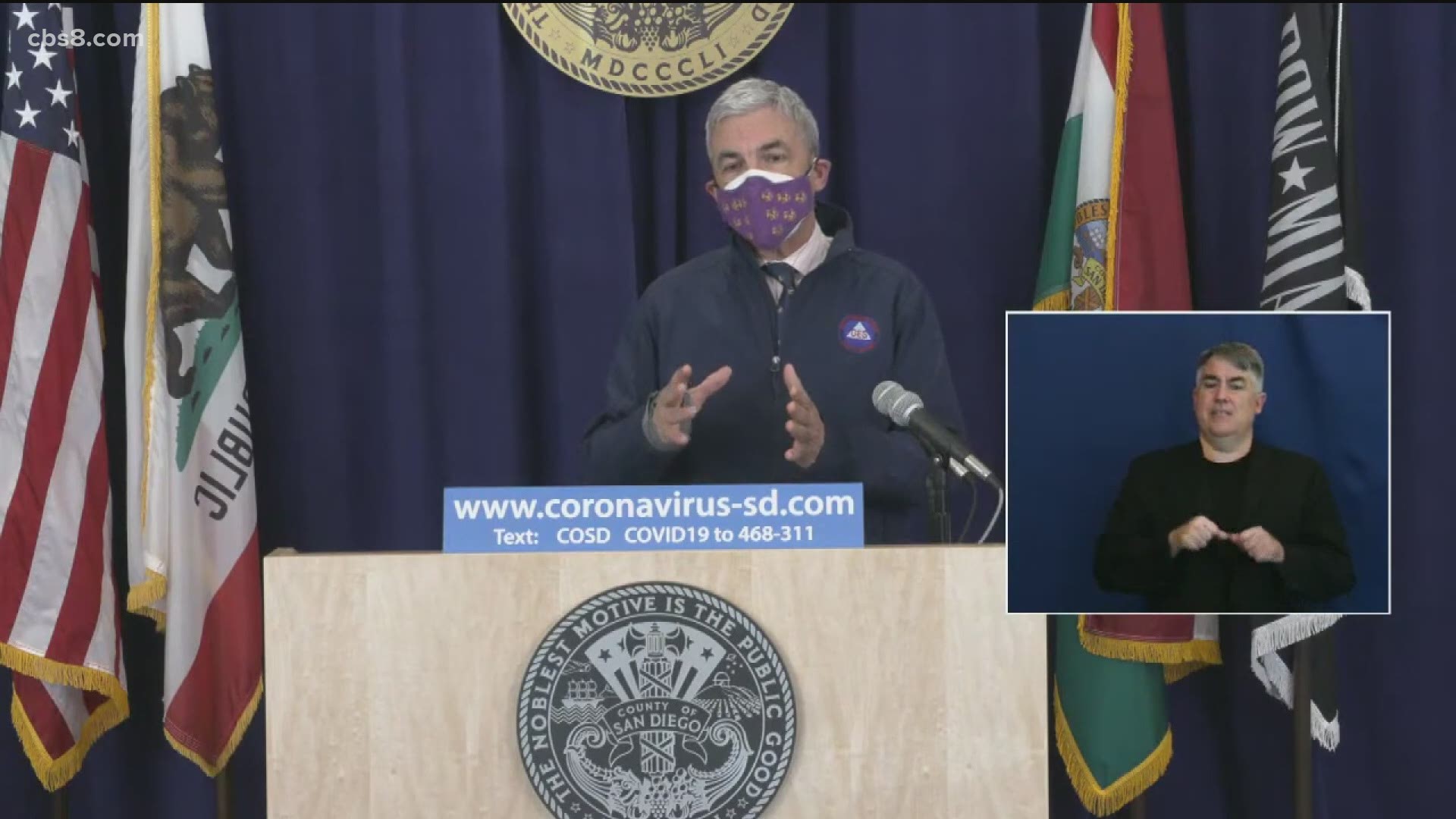 SAN DIEGO COUNTY, Calif. — The number of COVID-19 vaccines arriving in San Diego County will increase by around 10% for the second consecutive week, county officials announced Wednesday, as two new cases of the Brazilian variant of the illness were reported in the county.

The new strain of the virus first discovered in Brazil may be more effective in resisting vaccines, said Dr. Eric McDonald, medical director of the county Health and Human Services Agency's Epidemiology and Immunization Services Branch. He added that it's not clear if the variant makes symptoms of COVID-19 more severe or makes the virus more easily transmissible.

One case was reported in a resident with no travel history, and one in a non-resident who had traveled overseas. Neither was vaccinated and neither has been hospitalized.

"This virus evolved all the time," McDonald said Wednesday. "We just need to be more vigilant about all the things we are already doing."

He said it was possible that a vaccine booster shot to deal with the Brazil, South African and U.K. variants -- as well as any other mutations -- could be possible in the future.

As for vaccines now, San Diego County continues to have significantly more capacity to administer vaccines than supplies available. According to Supervisor Nathan Fletcher, even with the closure of the Petco Park vaccine distribution site, the county has the ability to administer 35,000 vaccines every day. Limited doses mean the actual number being injected is around 12,000 per day.

More than 1.59 million COVID-19 vaccine doses have been delivered to the region, and more than 1.44 million have been logged as administered. That number includes both county residents and those who work in San Diego County.

Supervisor Nora Vargas touted the county's success in targeting more vulnerable communities for vaccines. She said 98.5% of South County seniors had received at least one dose, compared to 75.8% of seniors countywide. The same effort employed in the South Bay is being expanded to Oceanside and the City Heights neighborhood in San Diego, Vargas said.

While San Diego County remains in the red tier of the state's four- tiered reopening blueprint, Fletcher explained three possible ways the county could move into the orange tier, which would allow for additional business openings and increased attendance limits.

The second method is what Fletcher describes as most likely -- the state administers 4 million vaccines to vulnerable communities in the healthy places index quartile, allowing for a loosening of the orange tier's guidelines to 5.9 daily cases per 100,000. California has administered more than 2.9 million vaccines to these groups as of Wednesday.

A walk-up clinic will be administering vaccines from 9:30 a.m. to 3:30 p.m. Tuesdays through Saturdays at Viejas Arena at San Diego State University, located at 5500 Canyon Crest Drive. Initially, the clinic will be able to administer 750 doses daily but can ramp up to 1,500 per day when more doses are available.

Vaccines will also be available from 9:30 a.m. to 3:30 p.m. Tuesdays, Wednesdays and Thursdays at the patio in the Mexican Consulate, 1540 India St. in Little Italy. The walk-up clinic will have the capacity to administer up to 100 appointments a day, dependent on supply.

The number of hospitalizations increased to 233 from Monday's 226. Of those, 81 were in intensive care units, a drop of three from Monday's 84.