The county's adjusted COVID-19 case rate starts the countdown to a possible move to the state's more restrictive purple tier as early as Nov 10. 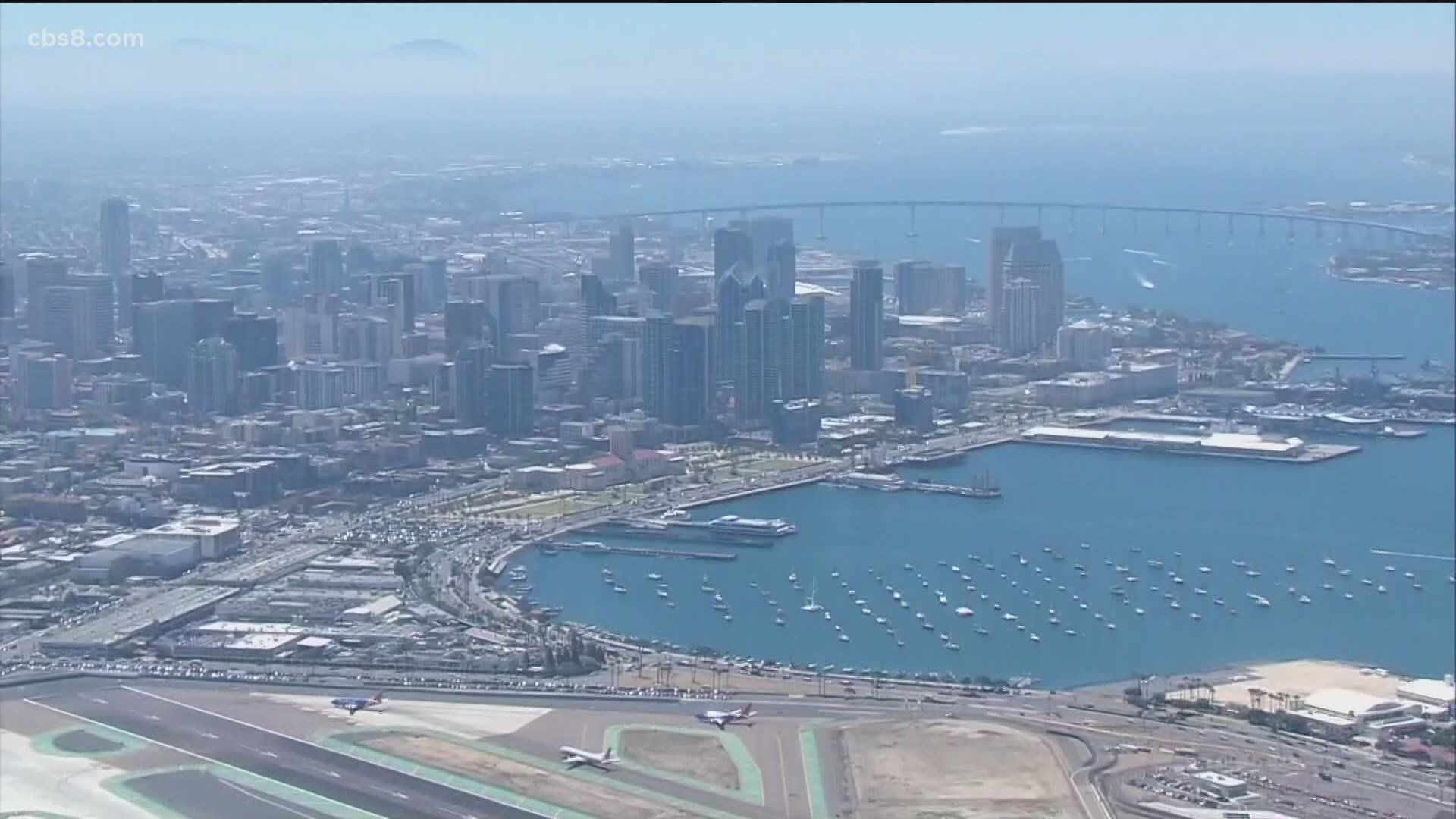 SAN DIEGO COUNTY, California — San Diego County’s adjusted weekly COVID-19 case rate was calculated at 7.4 Wednesday, putting it above the 7.0 case rate per the 100,000 people threshold for the red tier.

This higher rate does not move San Diego immediately up from its current red tier into the most restrictive, purple tier, but it does start a timeline that may result in changes to the status of the county by next Tuesday, Nov 10.

“We certainly hope we avoid that,” said Supervisor Nathan Fletcher. “It would take a significant change in trajectory given everything that we’ve been witnessing over the course of the last month in order for us to avoid that, but we remain optimistic and somewhat hopeful that will happen.”

San Diego’s case rate has been rising in recent weeks.  It has repeatedly avoided going into the purple tier because of credits it receives for doing more than the state median testing volume

We are in danger of more restrictions in San Diego County. We know we have it within our power to slow the spread, and lower the case counts. That not only fights to save lives it fights to help our economic recovery and we certainly want to strive towards that end. #COVID19 pic.twitter.com/fzkx1Yows8

Early episode date data from the county indicates the unadjusted rate is continuing to trend higher this week, indicating the county would need to vastly increase testing volume to avoid the purple tier. However, county officials have repeatedly warned the county could not test its way out of the purple tier. It must, instead, work to curb transmissions.

If the county reports numbers that qualify it for the most restrictive tier again next week, it will be reassigned to the restrictive purple tier for a minimum of three weeks which will result in restrictions to non-essential businesses that operate in the county.

“Any county that is teetering on moving into a more restrictive tier has the tools to avoid that by getting transmissions down or to be able to stabilize, bring transmission rates down and then move to a less restrictive tier more quickly,” California Health and Human Services Secretary Dr. Mark Ghaly said during his update on Wednesday. “I am not sure if San Diego will move back. We are certainly working closely with their county leaders to do all we can to control transmission.”

There is no one reason for why cases are increasing. While images and videos of young adults, particularly those enrolled in area colleges and universities, have been making headlines and were a large driver of the county’s previous flirtation with the purple tier, health stressed they are not solely to blame for the rising rate.

“There are no specific groups that are responsible for our increased number of cases,” said County Public Health Officer Wilma Wooten, M.D., M.P.H., “COVID-19 is pervasive throughout the entire county.”

Wooten also called on employers to take precautions to protect workers after a near 30% increase in reported workplace cases between September and October. There were 1,997 cases last month compared to 2,589 cases in October.

This week’s rate represents a significant increase over last week. On Oct. 27, the county's adjusted weekly case rate was reported at 6.5, within the red tier threshold.

Two weeks ago, just two erroneously added cases made the difference between San Diego having its first week of the purple tier versus remaining in the red. Just prior to the state releasing our case rate, the county found results from two inmates were counted against our rate and adjudicated the figures. State rules do not count inmates or Immigration and Customs Enforcement detainees in a county’s case rate since they do not mix with the general public. Once removed, our adjusted rate rounded down to a 7.0 instead of 7.1. 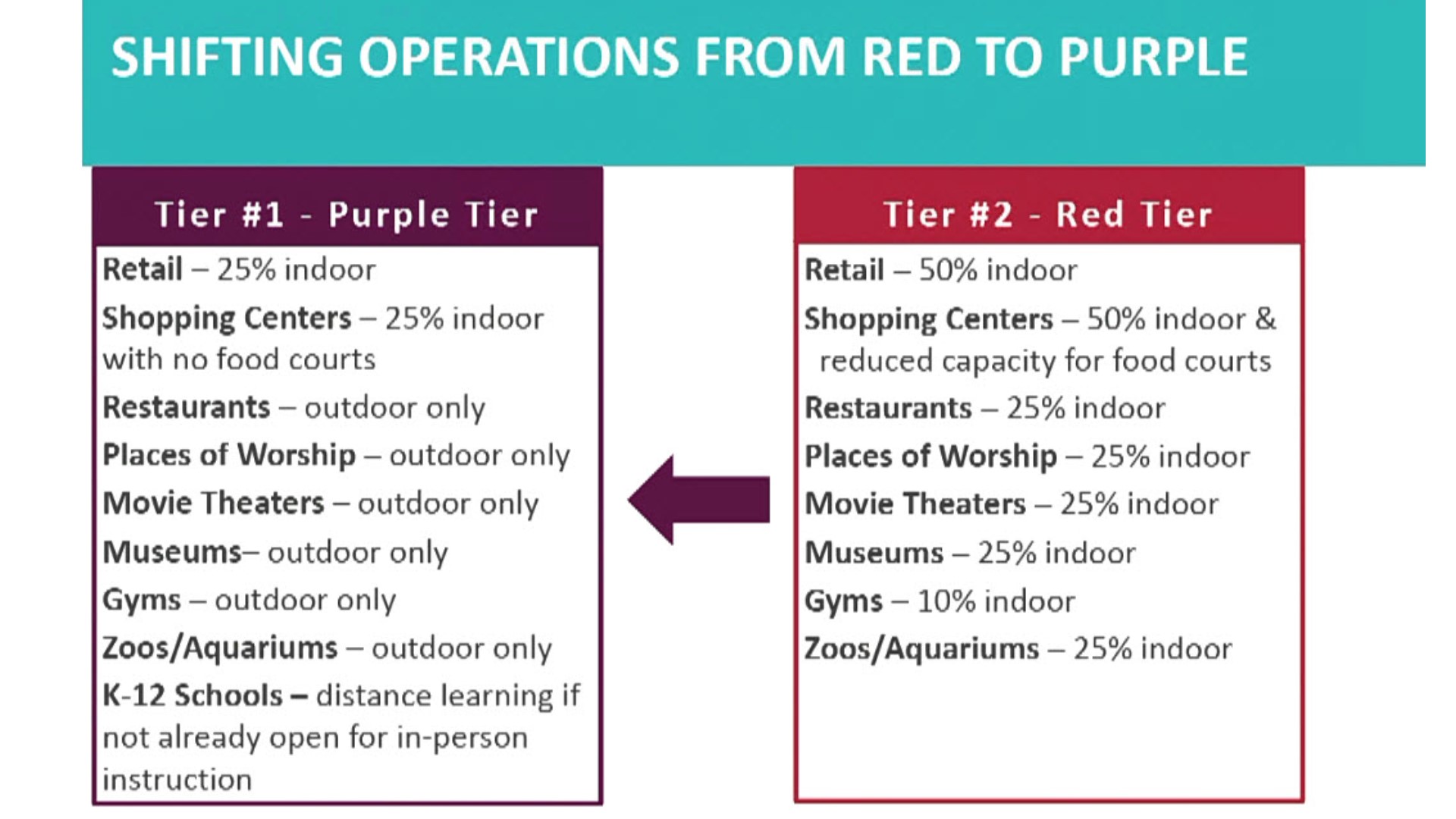 This week, the county is also adjudicating its case rate. However, it is mostly a formality to allow it to object at a later time should it discover any irregularities.

Last month, Riverside County used the adjudication process to delay moving into the purple tier by one week after posting a case rate above 7.0 for two consecutive weeks.

“With the numbers that were released today, which has us placed in the purple tier, we submit an intent for adjudication so that we can look if there are factors,” said Wooten. “We know we have increased cases and that is indeed the real reason why we are in purple, but we submitted that so that we can look at other factors that might be contributing and help reduce us from purple to red.”