According to state data, San Diego County posted two consecutive weeks with a case rate of fewer than two cases per 100,000 residents. 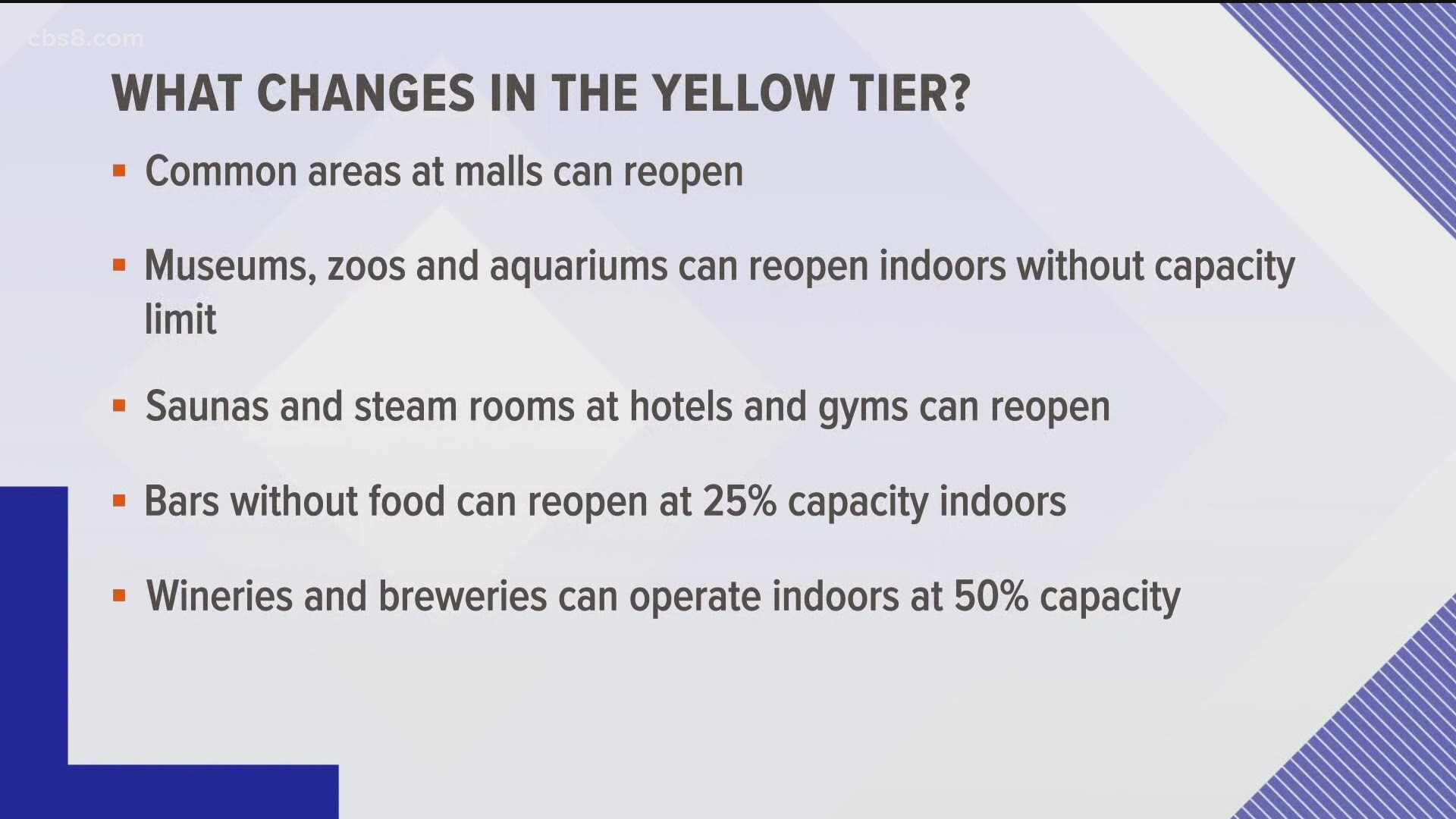 The county will move into the yellow tier just six days before the state scraps the tiered reopening blueprint on June 15, joining other urban counties such as Los Angeles, San Francisco and Orange.

In the yellow tier, outdoor music venues can increase to 67% capacity, restaurants and gyms can be at 50% capacity -- indoor and outdoor -- indoor bars can be at 25% or 100 people, whichever is fewer, and outdoor gatherings can expand to 200 people.

“We are excited where we are headed, looking forward to retiring the tiers, really good news on San Diego's continued progress with the vaccine,” said San Diego County Board of Supervisors Chair Nathan Fletcher at the last regular county Covid media conference.

"I think everyone can try to take a little sigh of relief. I am a little apprehensive to fully celebrate yet, but you know, I really think we are on course to try to get to some normalcy,” Rivera said.

A full list of what limits will be lifted after the descent into the yellow tier for that one week can be found online here.

When California fully reopens the economy on June 15, the state will move beyond the Blueprint for a Safer Economy -- the system of tiers the state has employed since last year. There will be no capacity restrictions or social distancing enforced, and only "mega events" -- events with crows larger than 5,000 people indoors or 10,000 outdoors -- will require or recommend vaccine verification.

As San Diego County moves into the least restrictive #YellowTier restaurants who have been outdoor only due to #pandemic capacity limits such as @TheGreatMapleCA in Hillcrest, are prepping to finally re-open Business indoors🍽 @CBS8 @DeskEight @NewsManLou pic.twitter.com/apAYwOscDO

Already at Great Maple, more customers are coming. Rivera said, "We've seen a huge uptick in people coming out and wanting to hang out."

He said it is great news the Yellow Tier allows 50% capacity but admits that the seating limit is also a challenge. Despite all the progress, the county will still be under a “state of emergency” through the end of the year as more people, especially children need to be vaccinated.

"June 15 is not the magic date or bullet for declaring that the pandemic is over. It is not as we are still seeing cases,” said Dr. Wilma Wooten, San Diego County chief medical officer.

Also, there is still difficulty for small businesses to get enough employees back on the job, and there is an increased demand to hold special events and parties.

"This is a huge, huge item for a lot of restaurants in our community. For a long time, special events have been off the table, so this summer, I think it's almost going to be like a summer of renaissance for people to enjoy life.” Rivera said.

Although many restaurants have already been serving customers indoors, Great Maple in Hillcrest recently set up these plastic dividers to separate each booth and plans to re-open fully indoors starting on Father's Day weekend.

On Monday, the county reported 65 new COVID-19 infections, bringing the cumulative case total to 280,807, while the death toll remained unchanged at 3,764.

A total of 5,898 tests were reported to the county on Monday, with 1.1% returning positive. The 14-day rolling average percentage of positive cases is 0.8%.

As of Monday, nearly 1.68 million San Diego County residents -- almost 60% of residents 12 and older -- are fully vaccinated and more than 2.07 million residents have received one of two doses.

More than 4.21 million doses have been received by the county, with more than 3.78 million administered.

A full list of available vaccination sites can be found here.

A breakdown of what can happen in the yellow tier can be found below and on the San Diego County website.

Watch: Nathan Fletcher announces that San Diego is eligible to move into yellow tier on June 9