San Diego will receive an update from the state Tuesday as to the county's reopening status after it narrowly avoided a potential move to the purple tier a week ago.

Less than a week after fully reopening its schools, the district reported a second COVID-19 case involving a Mission Vista High School student Monday, leading to the quarantine of about 150 students and four teachers.

According to the district, the second student tested positive for the illness on Sunday. That student attended school Tuesday, Wednesday and Thursday last week and is not connected to the other case in a student confirmed last week, the district said.

"The parents notified us that the student likely contracted the virus while traveling on a club athletic team not affiliated with school," a district statement reads. "We immediately notified all parents, students and staff who may have come into contact with the student."

While it is unlikely the student came into close contact with all 150 students and four teachers, the district said it was "proceeding with an abundance of caution" and placing all of them on a 14-day quarantine and pivot to Zoom and Canvas distance-learning. 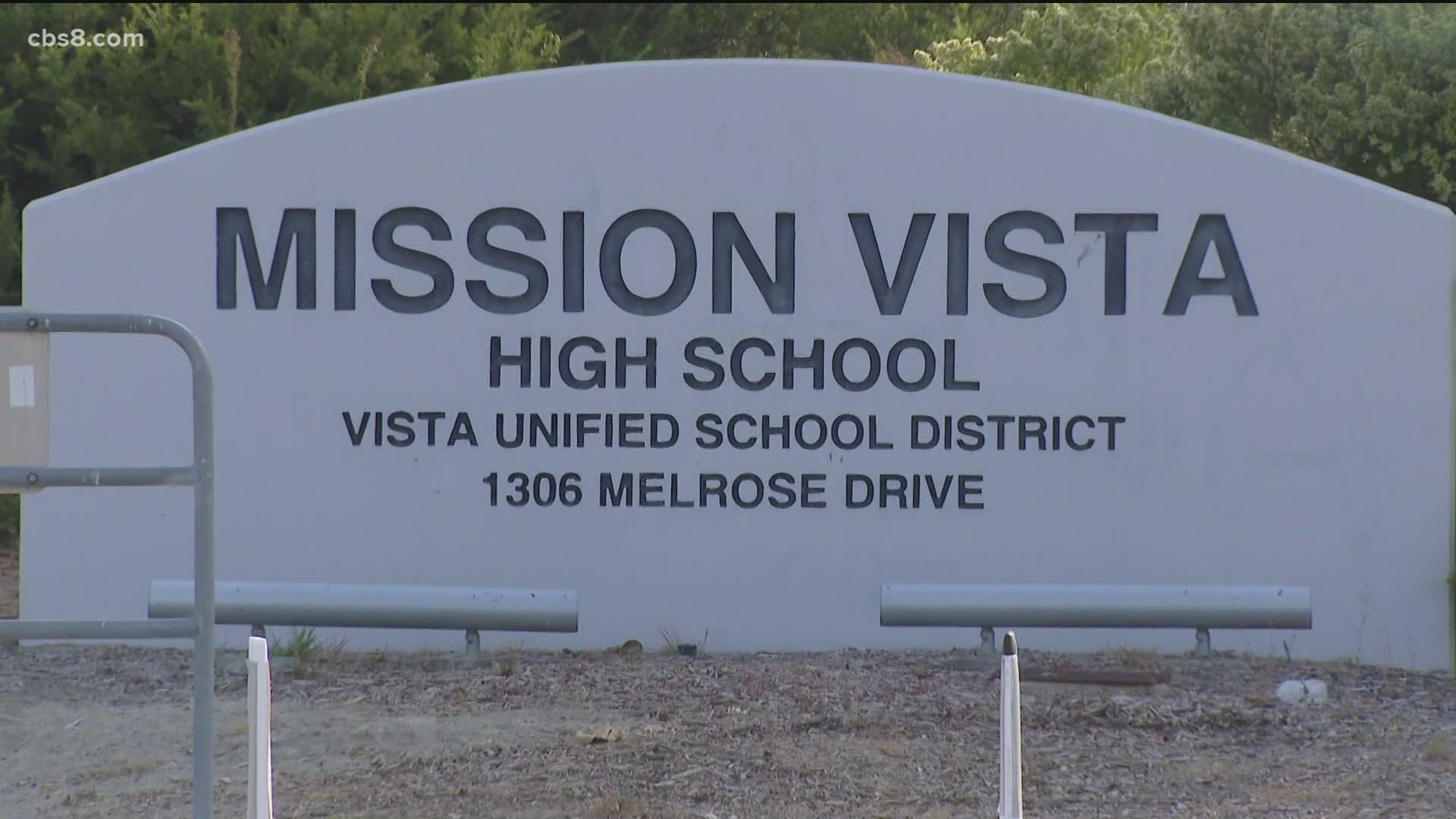 According to the district's COVID-19 safety dashboard, it has recorded five cases since Sept. 8, and just one since Oct. 20.

The county didn't record any deaths related to COVID-19 on Monday, and the death toll remains at 870. It will receive an update from the state Tuesday as to the county's reopening status.

All students at San Diego State University, meanwhile, remained under a stay-at-home advisory announced Thursday. The advisory began at 6 p.m. Friday and will run through Nov. 2 at 6 a.m. University officials said the move was made to discourage students from participating in Halloween events where physical distancing cannot be done. Students are advised to stay home unless they have an essential need.

As of Monday afternoon, the university has had a total of 1,252 COVID- 19 cases since the fall semester began, including 420 among students living on- campus, 803 among students living off-campus, 16 among faculty and staff and 13 among "visitors" -- defined as someone who has had exposure with an SDSU- affiliated individual.

On Tuesday, despite an unadjusted daily COVID-19 case rate of 7.8 per 100,000 population, the county was again able to avoid being pushed into the purple tier of California's four-level reopening system, which would have placed indoor activities at restaurants, movie theaters, gyms and a number of other locations in jeopardy.

The state adjusted the data for the week of Oct. 4-10 down to 7 per 100,000 -- the highest it can be without heading into the purple tier -- due to the county's high rates of testing. The data are reported on a one-week delay.

The state reported that the testing positivity percentage for the region increased from 3% to 3.3%, but it still remains low enough for this metric to remain in the orange tier. If a county reports statistics meeting metrics in a higher tier for two consecutive weeks, it will move into that more restrictive tier for a minimum of three weeks.

The state's health equity metric, which looks at the testing positivity for areas with the lowest healthy conditions, dropped from 5.7 to 5.5% and remained in the red tier. This metric does not move counties backward to more restrictive tiers, but is required to advance.