Getting off the state watch list is considered a milestone, but San Diegans shouldn't expect major changes overnight. 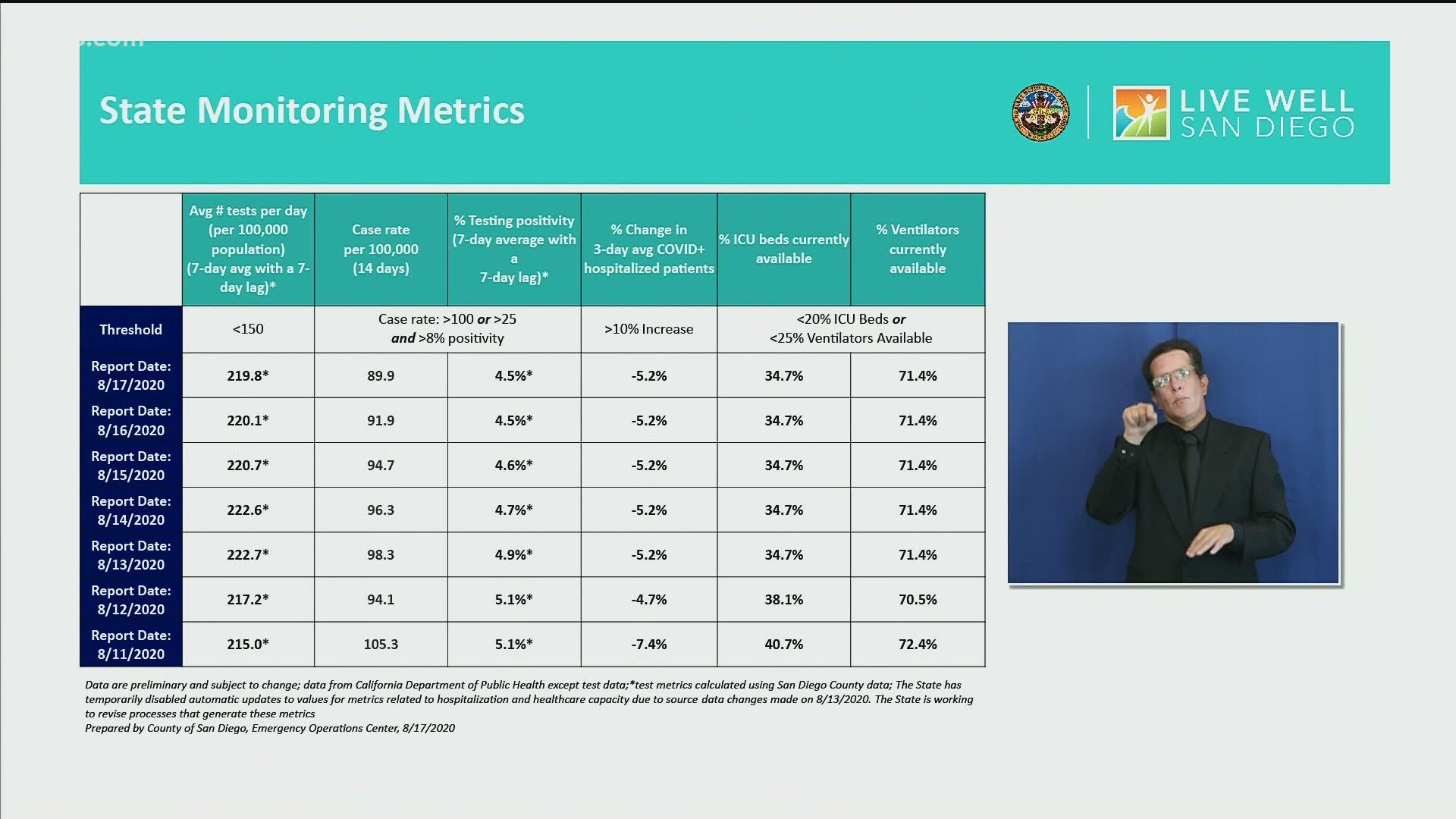 SAN DIEGO — Note: The featured video is from Monday evening before San Diego County was officially removed from the watch list.

As of Tuesday, San Diego County is off of California's COVID-19 watch list, the state confirmed. Getting off the watch list is considered a milestone, but San Diegans shouldn't expect major changes overnight.

On Tuesday, the county reported 15 community outbreaks over the last week, which is still above the predetermined trigger of seven outbreaks in a week. The county reported 202 new confirmed COVID-19 cases and seven new deaths, meaning the 14-day rolling average percentage of positive cases is 4.1%.

Of the state's 58 counties, 42 remain on that list, with Santa Cruz County falling off Friday.

1 / 4
County of San Diego
San Diego may come off the state's COVID monitoring list as early as Tuesday, Aug 18

"This is a dynamic list. People come on, people come off, the numbers shift every single week," Newsom said Monday. "I anticipate this week the numbers to shift again and it looks like, all things being equal and the latest reporting period -- 24-hour reporting period, which we will have later this evening -- it's very likely San Diego will join the list of those counties removed. So, likely tomorrow."

Previously, county and state officials had said if the rate stays below 100 per 100,000 people (it was 91.9 Sunday) for three consecutive days, the county would officially be removed from that list. After an additional 14 consecutive days below that number, K-12 schools could potentially reopen for in-person teaching, depending on individual school district metrics.

Some 48 elementary schools have filed waivers with the county to return to school early. This means schools could reopen at the end of August.

The county will be placed back on the list should it be flagged for exceeding any one of six different metrics for three consecutive days. Those metrics are the case rate, the percentage of positive tests, the average number of tests a county is able to perform daily, changes in the number of hospitalized patients and the percentage of ventilators and intensive care beds available.

Changes to businesses are not yet tied to a county’s removal from the watch list. Supervisor Greg Cox and San Diego Mayor Kevin Faulconer co-signed a letter to Newsom asking for the state to issue guidance for businesses so they can prepare for eventual changes.

The state is expected to slowly reopen industries based on outbreak data to avoid teetering between open and closed.

“Based, again, on the data, science, advice of public health officials when we get to that point, sure we can almost certainly find some that we can feel comfortable that we can reopen, but I don’t think it would make sense to just immediately snap back to where we were,” said Supervisor Nathan Fletcher.

Cox said, after a conference call with Dr. Mark Ghaly, Secretary of the California Health and Human Services, he expects to see some guidance from the state later in the week.

San Diego’s removal from the watch list was delayed because the state had a backlog of more than 250,000 test results. It expected to be off the list last week. However, CDPH temporarily paused the addition or removal of all counties from its monitoring list until the backlog was cleared. Dr. Wilma Wooten, M.D., M.P.H., the county’s public health officer, said CDPH began counting San Diego’s case rate below 100 on Saturday.

Cox concluded by adding that the new border testing site in San Ysidro is expanding its hours to accommodate for about 200 people per day.

Dr. Wilma Wooten->Says.. according to state.. Saturday was SD's first day under 100 cases per 100K.. that's why tomorrow will be SD's first day off monitoring list.