San Diego County’s unadjusted rate of 7.9 puts it well above the limits of its current Tier 2 status and the county could backslide as soon as next week. 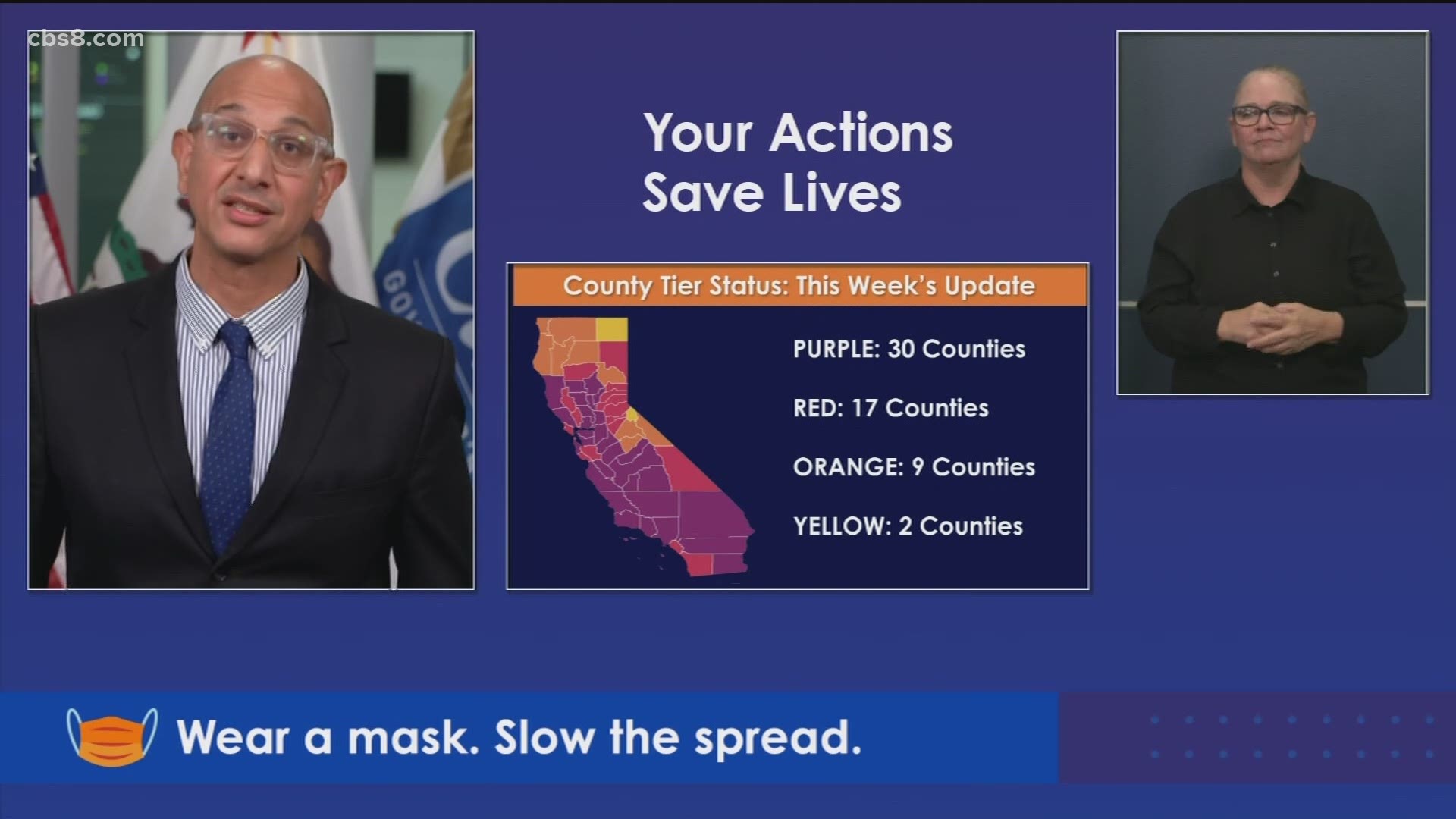 SAN DIEGO COUNTY, Calif. — San Diego County could become the first county in California to backslide under the state’s new tier system used to measure the spread of coronavirus. The county’s unadjusted rate of 7.9 puts it well above the limits of its current Tier 2 status. The California Department of Public Health then adjusted the rate to 8.1 because it determined San Diego performed fewer tests than the median number performed statewide.

If the county has a case rate above 7.0 for 14-consecutive days then it must spend at least three weeks in Tier 1, which would require some businesses to adjust their models next week.

“If that's what the data shows, that's what the state is going to expect,” said Mark Ghaly, Secretary of the California Health and Human Services Agency when asked if San Diego could be placed back into Tier 1.

The county’s case rate has been increasing since the state began applying its new Blueprint to Reopening formula late last month. San Diego was placed in the lower tier because of its status under the previous case rate metric.

While cases have remained high, the county has had fewer community outbreaks in September.

Last month, San Diego had 85 community outbreaks, which occurs when three or more cases from separate households are connected to a single location.

About 25% of the county’s case rate includes students at San Diego State University. More than 700 students have tested positive since the semester began. State reporting rules require counties to include students in their case rate because they are part of the community-at-large.

Approximately 75% of the students who have tested positive live off-campus.

“We are aware of at least three county residents who have direct connections with either individuals or residences of San Diego State, that are not San Diego State students also not faculty or staff at San Diego State, who are epidemiologically linked to students,” said Eric McDonald, M.D., M.P.H., who heads the county’s Epidemiology and Immunization Services branch of HHSA.

At least four non-county residents without ties to SDSU who tested positive have also been traced to the cases at SDSU.

On Tuesday, the Board of Supervisors voted to ask Gov. Gavin Newsom to exclude students from the case count. Chairman Greg Cox said he intended to sign the letter Wednesday evening despite the governor already refusing the request.

“You can't isolate as if [SDSU] is on an island. A campus community is part of a larger community. So, the answer is no,” said Newsom when asked if he would approve the request.

Wooten told the board Tuesday the county’s case rate would likely still be within the Tier 2 range if SDSU students were excluded. Currently, guidelines only allow counties to exclude inmates.

The county’s case rate will be re-evaluated Sept. 22. If the rate is above 7.0, after adjusting for testing, the state could place San Diego in Tier 1.

“We’re not counting anything out yet,” said Wooten. “We continue to analyze the data and through the data that is going to be analyzed next week, we’ll look at that data and know where we will be.”

How many students in San Diego have COVID-19?

Have SDSU students been asymptomatic?

“We expect asymptomatic transmission is contributing somewhat,” said McDonald. “[As of last week], about 11% of students were individuals who reported no symptoms, so 89% had symptoms. We would expect, as time goes by, to pick up some less symptomatic cases but exactly how many is hard to say.”

What happens if San Diego County's case rate falls below 7.0 next Tuesday?

What happens if San Diego County's case rate remains above 7.0 next Tuesday?

The county would be eligible to be placed into Tier 1, colored purple on the state’s charts. Click here to see what this means for different businesses.

How does this compare to other counties in Southern California?

Why is there an adjusted and unadjusted rate?

A county’s case rate is first calculated based on an average of how many confirmed cases it has per 100,000 residents over a 7-day period with a 7-day lag based on episode date. The rate is then adjusted lower or higher based on how many tests a county performed compared to the median state testing volume.

San Diego performed less than the median state testing volume, so its rate was adjusted up from 7.9 to 8.1.

How can I see the data used to calculate our tier?

What does this mean for schools if San Diego County goes to Tier 1?

The restrictions within tiers only apply to businesses. School districts can make their own decisions on whether to have in-person education.

Have there been any COVID outbreaks at San Diego K-12 schools?

“We are not aware of any outbreaks in any of the K-12 schools, hence none of those schools would be required to close as a result,” said Wooten. “COVID-19 is widespread throughout the county, throughout the state, single individuals can become infected and some of those individuals might be staff at schools.”