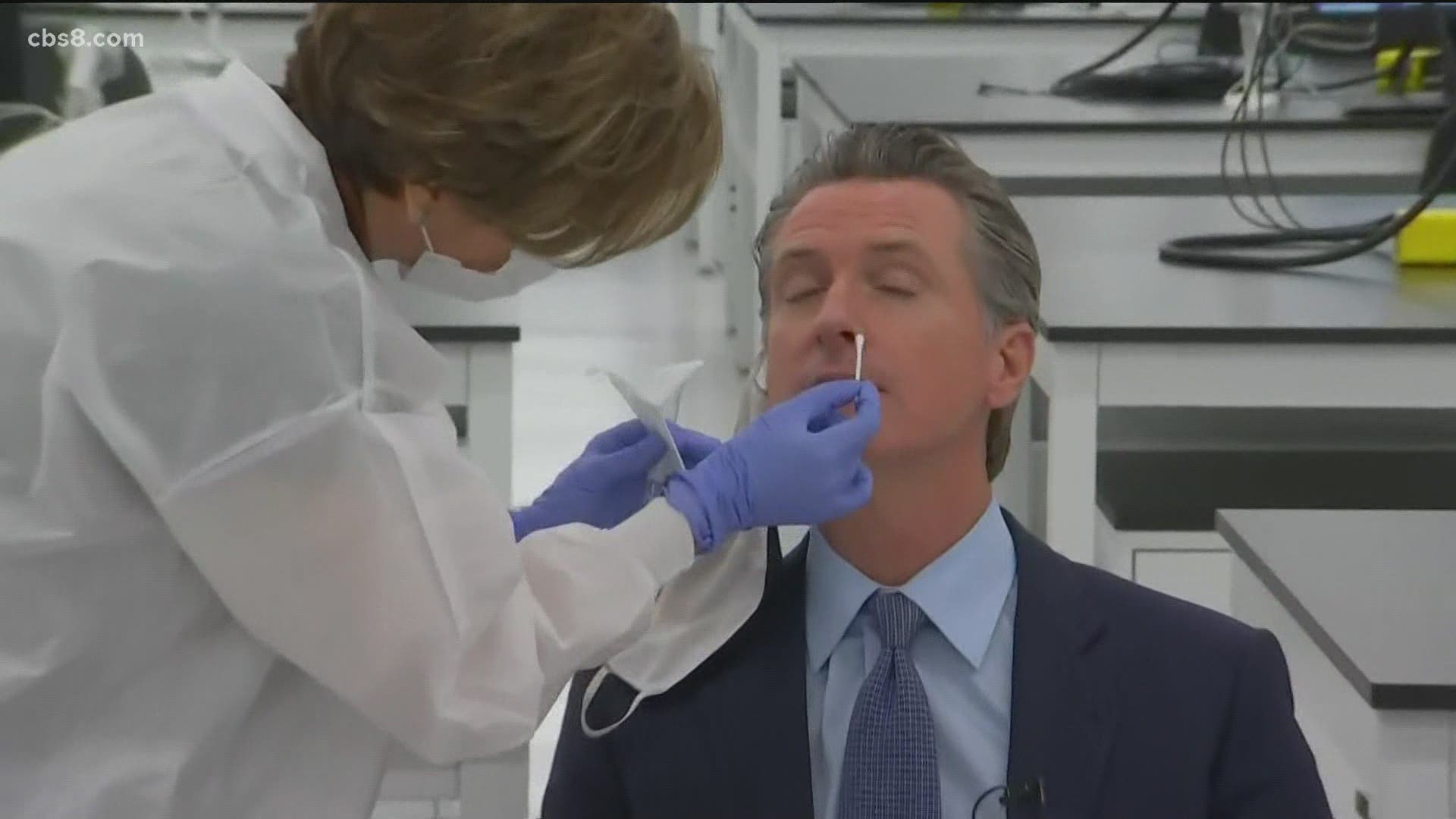 On the same day that San Diego saw the increase in positive cases, Governor Newsom celebrated the opening of a high-tech COVID-19 testing lab in Valencia designed to dramatically increase the state's coronavirus testing capacity while reducing the turnaround time for processing results.

The $25 million lab, plans for which Newsom announced in August as part of a deal with the scientific diagnostics firm PerkinElmer, will ultimately be able to process 150,000 tests per day when it reaches full capacity in March. The 134,000 square-foot lab began operating with 300 employees, but that will increase to 700 by early next year, Newsom said.

"This lab is happening right at the right time," Newsom added. "We want to disrupt the entire process and the entire system."

The high-volume lab will also dramatically drive down the costs of testing. Newsom said the state is currently paying an average of $150 per COVID- 19 test, and as of Thursday, the state has conducted more than 18.4 million tests.

"We can't continue down that path," Newsom said. "It makes no economic or fiscal sense. That's why we want to disrupt the entire process and the entire system. And that's exactly what we're doing here in a very audacious and bold way in California. We're going to be able to get these tests down to $30.78 per test. ... That's when we're fully operational at 150,000 tests.

In addition to driving down the costs of the testing and increasing statewide testing capacity, the lab will also allow for faster results, the governor said. The contract with PerkinElmer requires tests results within 24 to 48 hours.

Newsom said the lab is opening at "exactly the right time, when more pressure is being placed because of the increase we're experiencing around the nation in our case rate and increase ... (in) our positivity rate and the need and desire to test, to trace to isolate and ultimately get us to where we need to go, and that's with a vaccine."

This increased testing capacity will be targeted toward underserved communities, especially Latinos and African-Americans, as well as those living in urban and rural areas with less access.

"We are going to be deploying mobile units, buses to places where they are needed, partnerships with community-based organizations and churches, so that they will be available everywhere where people need to be tested," said Dr. Gil Chavez of the California Dept. of Health, speaking at Friday's ribbon-cutting.

The county avoided the state's purple tier, the most restrictive, for yet another week on Tuesday, remaining in the less restrictive "red" tier of the state's four- tiered coronavirus monitoring system.

Tried it out myself.

We’re not waiting around for the federal government to act. pic.twitter.com/OKII180d7J

According to the California Department of Public Health, the county's unadjusted case rate is 7.4 per 100,000 -- enough to be in the purple tier, which has a floor of 7 per 100,000. However, the high volume of tests the county is able to perform daily allows for an adjustment from the state. This adjustment has kept the county in the red tier for several weeks, saving it from having to shut down nearly all nonessential indoor businesses.

The state data, updated every Tuesday, reflects the previous week's case data to determine where counties stand in the state's four-tiered reopening system.