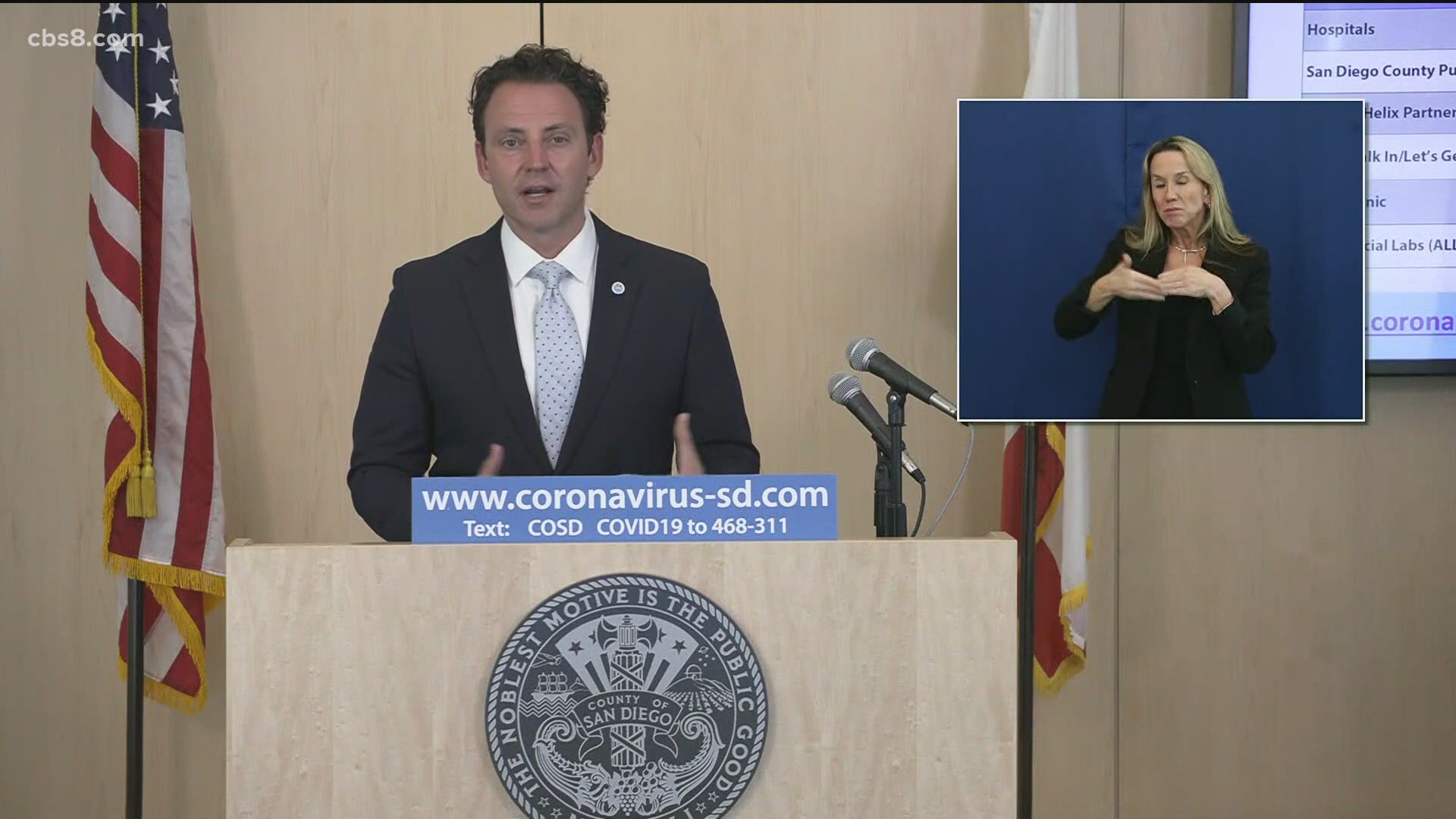 SAN DIEGO COUNTY, Calif. — San Diego County’s case rate remained within the limits of the red tier this week but is well above what is needed to move to orange. The state calculated the county’s unadjusted rate at 7.2, but after including credits for doing more than the state median testing volume, it was adjusted to 6.7.

San Diego added an average of 249 cases each day this week as of Wednesday. It needs to have an average of less than 133 new cases a day for 14 consecutive days to have an unadjusted case rate that would qualify it for the orange tier. Testing credits and, a soon to be announced, equity metric for helping high-need communities may help the county reach the tier sooner.

“As we sound a bit of the early alarm, it's really a reminder to be able to do more to reduce transmission in our communities,” said Mark Ghaly, Secretary of California Health and Human Services.

San Diego plans to continue to increase testing. All the county’s 41 sites offer walk-in services although most give preference to those with appointments.

On Thursday, the county will also open the first of four sites exclusively for school personnel. It will also begin offering to test children in grades K-12 and will soon expand testing to children as young as six-months-old.

Over the summer, labs were overwhelmed by efforts to expand testing, which resulted in results taking up to 12 days at commercial laboratories.

“There’s obviously more capacity now with more testing coming on board. There’s more supplies. It’s getting a little bit easier, but as we ramp up we’re going to be very mindful of keeping our average turnaround times,” said Supervisor Nathan Fletcher.

Nick Macchione, the director of San Diego County’s Health and Human Services Agency, estimated the county will soon be able to conduct up to 4,000 tests a day at its sites through a partnership with Helix, a clinical laboratory-based in San Diego. He also estimated Rady Children’s Hospital, which offers pediatric tests, is only at half of its capacity.

“We are in good stead in our county of having both Rady Children’s Network, Helix and our own public health lab as we’ve been building capacity to handle not just school reopenings, but the general public,” said Macchione.

To date, health officials said no school has had to close because of an outbreak of COVID-19.

Earlier this week, state health officials released guidelines to reopen playgrounds for the first time since the pandemic began. Parks moved quickly to implement new regulations, including cleaning schedules and signage. Additional playgrounds are expected to reopen in the coming days.

The state has not released guidelines on conventions or other large gatherings. However, tickets went on sale this week for Los Angeles Comic-Con in December.

Organizers plan to reduce capacity from 42,000 attendees to 13,500 people and take several safety precautions. They also offered refunds or rollovers to future events if health officials recommend postponing the show.

The pandemic forced the cancellation of San Diego Comic-Con this year for the first time in 50 years. Local health officials affirmed the county’s ban on large gatherings and conventions will remain in force for the near future.

“The state has not given guidance on large events or conferences. Before they transitioned to the tiered system the expectation is that would occur when we achieve herd immunity,” said Wilma Wooten, M.D., M.P.H., the county’s public health officer. “In the interim, we’re working very closely with the convention center so that when the state does give guidance about convening such an event that they will be ready.”