A parade of nurses and healthcare workers cheered for Daniel Plata as he was released after being hospitalized for nearly three months. 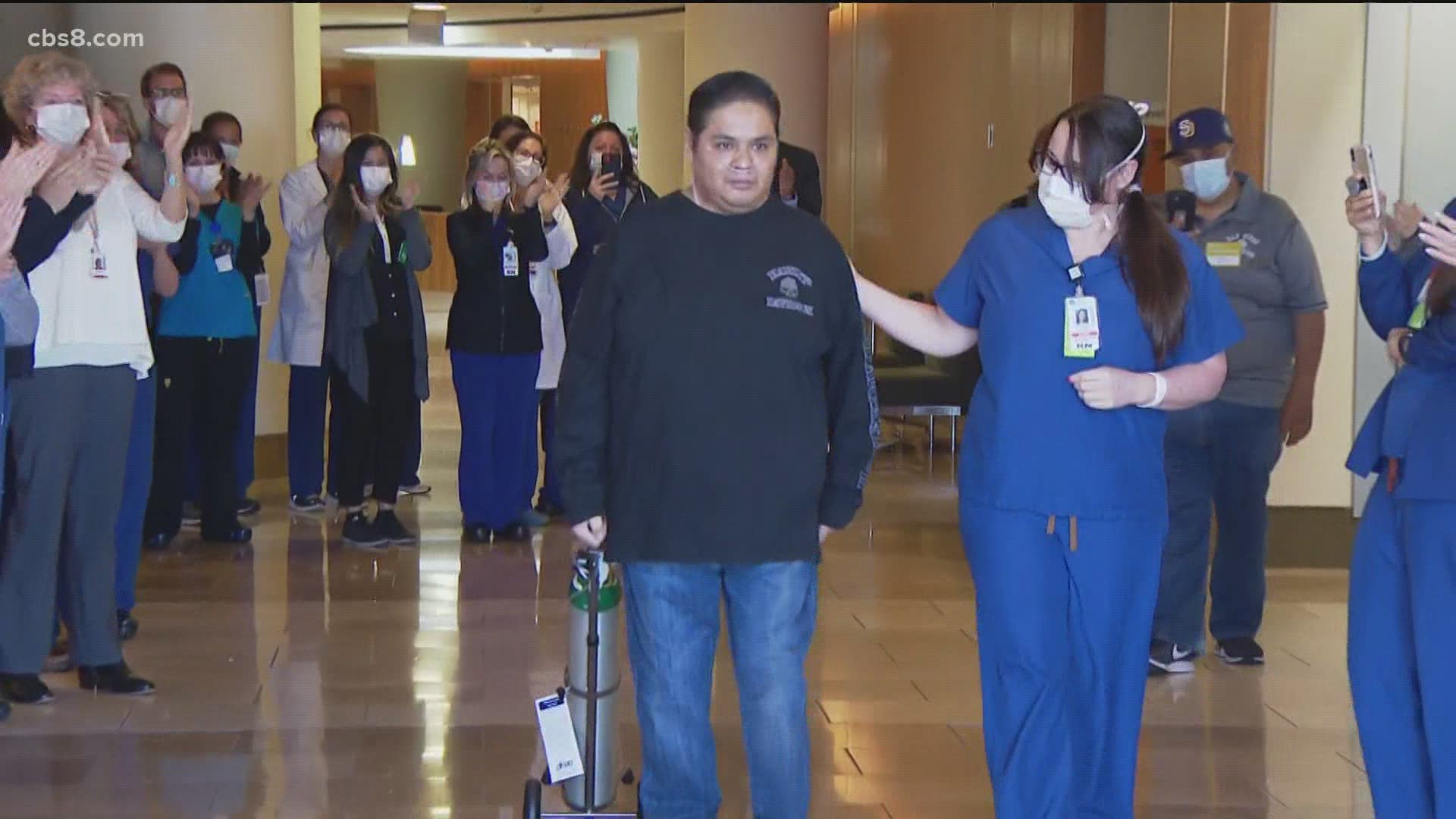 SAN DIEGO — A South Bay nurse who has been hospitalized with COVID since January is making a remarkable recovery.

On Monday, he was released from Sharp Memorial Hospital after spending 84 days in the hospital.

As he walked out on his own with an oxygen tank in tow, a parade of healthcare workers at Sharp Memorial and Sharp Chula Vista and family cheered him on.

"They wanted to wheelchair me out but I was determined to walk out,” said Daniel.

Cheering him on where his team of nurses and healthcare workers at Sharp Memorial.

“The motivation he has and how eager he was and how much he pushed himself really just made us hold him accountable,” said Priscilla Macias, BS RN, Sharp Memorial Surgical ICU nurse.

The nurses he worked with during COVID at Sharp Chula Vista were also there to support him as he proudly walked out.

“To see Danny beat the odds and be that miracle, I think we all needed that miracle after COVID and it's been awesome to see him walk out alive,” said Brittany Hess, Sharp Chula Vista nurse.

Daniel’s 11-year-old son and 18-year-old daughter, girlfriend, mom and dad, and sisters were the first to hug him.

“We knew if anyone would make it out it would be him. He’s always been a fighter and he has always been so strong,” said Ximena Plata, Daniel’s sister.

In January, Daniel was hospitalized at Sharp Memorial, a few days later he was put on a ventilator and on extracorporeal membrane oxygenation (ECMO), the life support machine that oxygenates your blood outside of your body to allow your heart and lungs to rest. It’s often the last resort for critical COVID patients.

“I came in to say goodbye a month ago and now he is walking home,” said Yolanda Plata, Daniel’s daughter.

On March 9, he was extubated but still on ECMO.

“When he first started to talk the first thing he said, 'I'm going to walk out of here,' and now we see him walk,” said Johnny Padilla, Sharp Memorial HCP.

Video from a few weeks ago of Danny walking with assistance while on ECMO went viral.

“I am a miracle. I shouldn't be here. They did all the right moves at all the right times. They took care of me even when some would have given up,” said Plata.

As Danny thanked everyone he also stressed the importance of getting the COVID vaccine.

“It's very important you have to get vaccinated. Even though it's not 100 percent it will help,” said Plata.

He also encourages anyone fighting COVID and their family and friends by their side to never give up.

“There is hope. You have to fight,” said Plata.

It is expected to take several months for Danny to recover but his family says with his progress it could be sooner.