Rios Elementary is participating in a bi-weekly pilot program that relies on student saliva samples to test for the virus, with results back the same day. 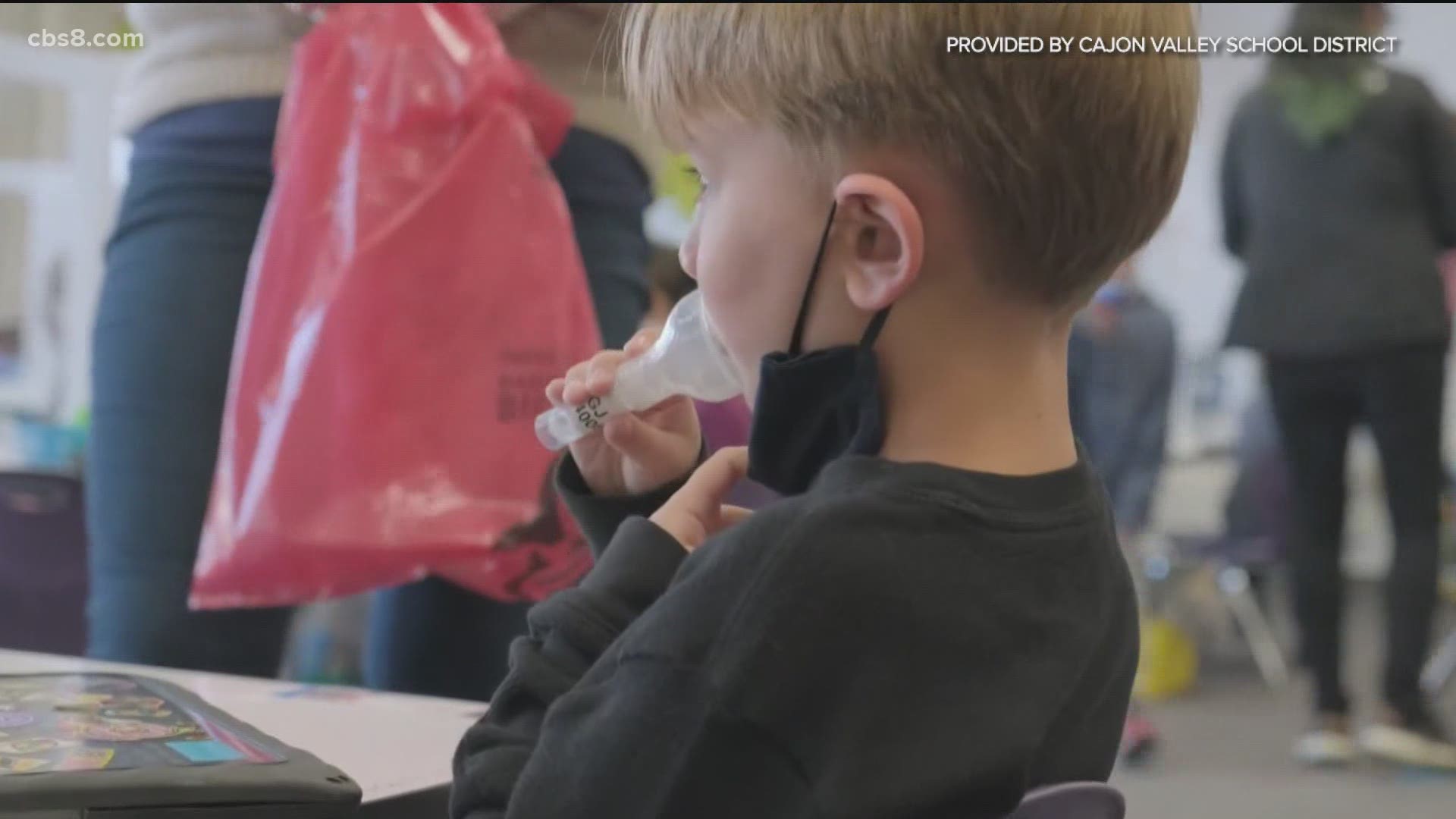 Now, they're taking it one step further by participating in a unique pilot program to test kids on campus for COVID-19.

Normally, kids are told not to spit at school, but at Rios Elementary in El Cajon, it's now encouraged as part of the bi-weekly program, which uses saliva samples.

Parent Erika Platt has a first and third grader at the school.

"I honestly feel so blessed for this opportunity. It helps me to know that they're safe," Platt said.

Platt says not only does the bi-weekly testing put her mind at ease, but doing it using saliva is something her kids actually look forward to versus a nasal swab.

"I think this way they're more eager and willing to participate. It's not as intimidating and they're excited," she said.

It's also convenient, especially when you consider the school's location, and the hoops some families have had to go through to get tested.

Liz Loether is the principal.

"We are a far distance from the mega sites in Central San Diego and so we have conveniently every two weeks we have testing here at school. And parents don't have to pay for the test, they don't have to go find a site or beg their pediatrician," said Principal Loether.

Right now, the program is voluntary, with about 60% of students taking part.

Rios Elementary is the first school within the Cajon Valley Union School District to test out this method.

They were approached two months ago by the El Cajon based company behind it, Calbiotech, Inc.

Here's how it works: Teachers and staff oversee the test while students spit in a tube, which is then sealed and picked up by a Calbiotech driver in the morning.

Those samples are tested same day in their lab, with results back by the afternoon.

David Barka with Calbiotech says the turnaround is quick because they test in bulk by dividing classrooms into pods of five.

"We're not having to test every individual sample from the start. We pool. If we get a negative, process of elimination tells us no need to test individually. If we do get a positive pool, then that's the secondary check," said Barka.

According to Barka, the PCR method is used, making it just as accurate as a swab test.

In regards to cost, it's three times cheaper because medical professionals don’t have to administer it, and they're not testing every single sample unless they have to.

“There's no reason why we can't use this nationwide," said Barka.

More schools within the Cajon Valley Union School District will be added to the program as soon as next week.

Calbiotech officials say additional districts within the county, as well as outside the state are inquiring about using this program as well.

Using spit to test for Covid? It’s being done at one East County school, and you could start seeing this method used at others soon. Details at 4&6 @CBS8 @News8 pic.twitter.com/HBb3CH0u08