Gov. Newsom announced new stay-at-home rules on Thursday that will trigger when a region’s intensive care unit capacity falls below 15%. 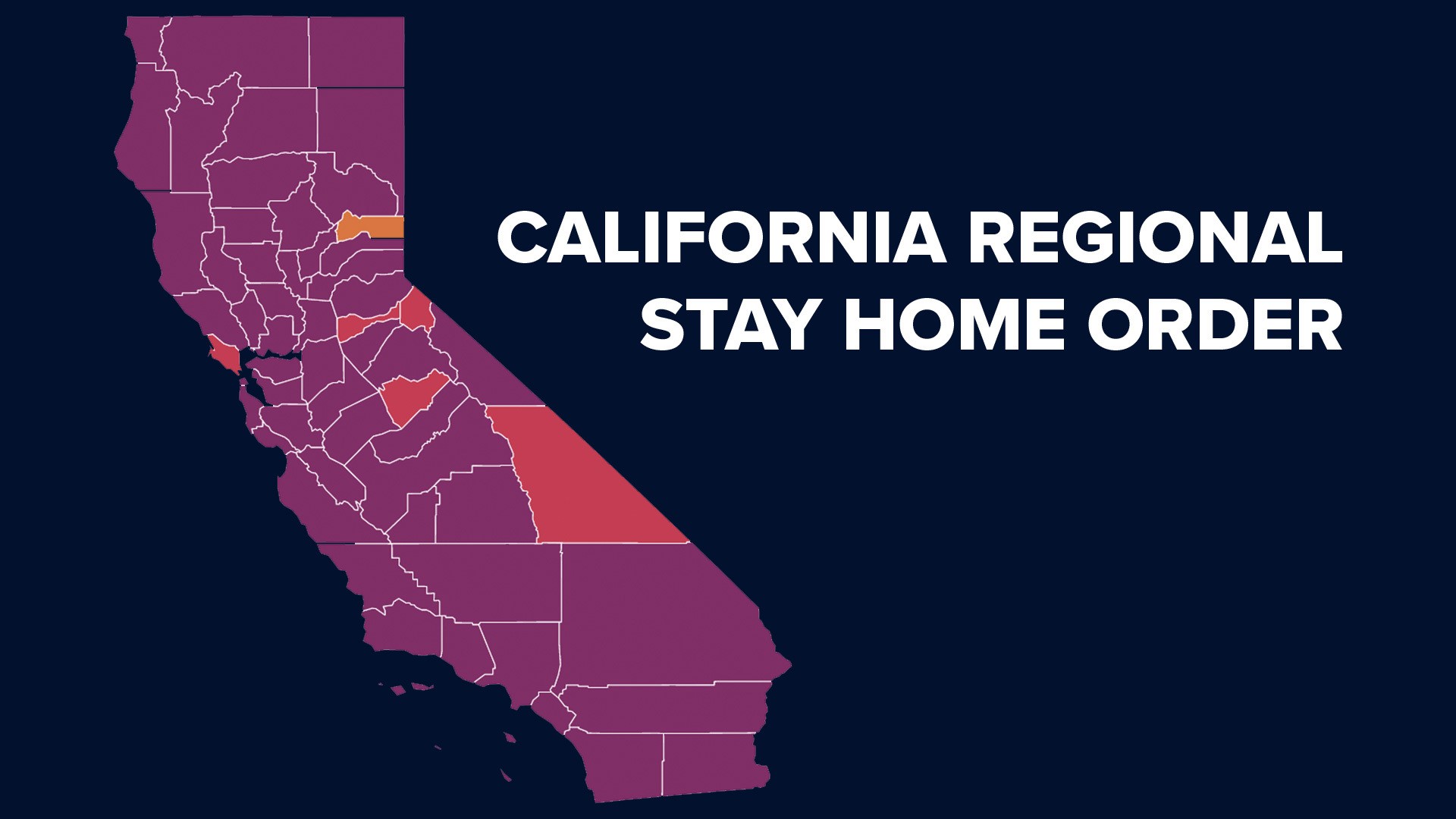 SACRAMENTO, Calif. — California Gov. Gavin Newsom says most of the state will likely be under a new stay-at-home order within a day or two.

Newsom announced new stay-at-home rules on Thursday that will trigger when a region’s intensive care unit capacity falls below 15%. Although no region met that criteria as of Thursday, Newsom said four of the state’s five regions are likely to meet that threshold within a day or two.

The Southern California region - which includes San Diego County - could reach the 15% threshold in a matter of days.

He said the only one region likely not to meet the threshold is the San Francisco Bay Area.

The Regional Stay Home Order will go into effect within 48 hours in regions with less than 15% ICU availability. It prohibits private gatherings of any size, closes sector operations except for critical infrastructure and retail, and requires 100% masking and physical distancing in all others.

The order will remain in effect for at least 3 weeks and, after that period, will be lifted when a region’s projected ICU capacity meets or exceeds 15%. This will be assessed on a weekly basis after the initial 3 week period. Learn more about this order.

The state released a map of the five regions. The regions are:

Newsom also stressed that ICU admissions due to COVID-19 have spiked by 67% in recent weeks, in conjunction with a statewide surge in cases that has also seen a disturbing rise in fatalities. He said the state reported just 14 deaths on Nov. 2, but now has had back-to-back days of 113 deaths, with nearly 1,000 fatalities in the last four days.

"If we don't act now, our hospital system will be overwhelmed," Newsom said.

When triggered, the stay-at-home order will be in place for three weeks and will bar gatherings of people from different households. It will also force the closure of all bars, wineries, personal service businesses, hair salons and barbershops. Schools with waivers will be allowed to remain open, along with "critical infrastructure" and retail stores, which will be limited to 20% of capacity. Restaurants will be restricted to takeout and delivery service only.

Newsom said the state will also restrict non-essential travel, but he gave no immediate details.

Newsom again said the state has 11 medical "surge" facilities on standby to open and provide hospital bed space. One of them, the ARCO/Sleep Train Arena in Sacramento, will open on Dec. 9, and another is set to open in Imperial County.

Included among the other nine surge centers that could be opened are the Fairview Development Center in Orange County, the Riverside County Fairgrounds, the vacant Sears building in Riverside and Palomar Medical Center in San Diego, Newsom said.

In the southern part of the state, a new, temporary stay-at-home order is already in place. It went into effect Monday, November 30 for Los Angeles County. Then an updated order came for those living in the city of Los Angeles Wednesday night. It’s called "Targeted Safer at Home Order.” That new order was issued by Los Angeles Mayor Eric Garcetti.