The study found that while 57% of all Californians are likely to get vaccinated, 44% of Black Californians said they would 'definitely' not get it 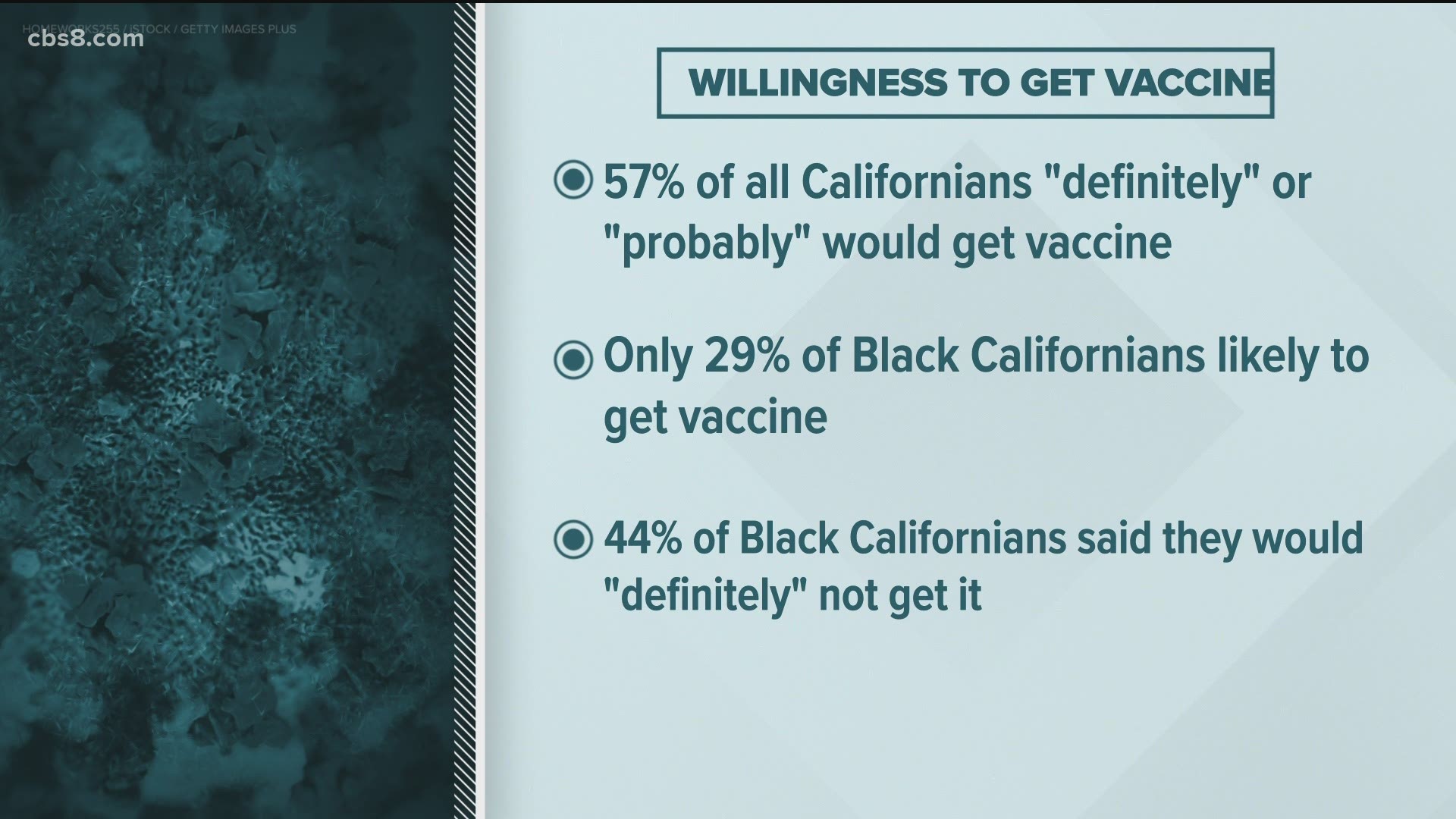 SAN DIEGO — As work continues at breakneck speed on a vaccine for the novel coronavirus, a new statewide study shed light on who in California would be likely to get immunized, and who would be more likely to pass. There is more on what may be behind this divide, as well as what else the study reveals.

This same study by the Public Policy Insititute of California found more than two-thirds of Californians are concerned that the vaccine approval process is moving too fast.

Earlier Friday, President Donald Trump told Americans that the federal government is on track for a safe and effective vaccine in a matter of months.

"We'll have 100 million vaccine doses before the end of this year," the president promised at a campaign rally in Florida.

Even once a coronavirus vaccine is available, questions remain as to how many Americans would be willing to get one.

That same study released this week by the Public Policy institute of California finds that, out of all Californians, 57% would either "definitely" or "probably" get a COVID-19 vaccine if it were available today.

From the latest #PPICsurvey: Two-thirds of Californians and solid majorities among racial/ethnic groups are more concerned about approval of a #COVID vaccine moving too fast, without fully ensuring safety and effectiveness. Full survey here: https://t.co/ZNnXaxPDax pic.twitter.com/vt6hYlHu5N

Broken down along racial lines, though, the California-based study revealed that only 29% of Black Californians said that they are likely to get the vaccine, while 44% surveyed said they would definitely not get it.

This disparity is also reflected in disproportionately lower number of both African-Americans and Latinos in current clinical trials for a COVID-19 vaccine.

"We've got to get a higher percentage of minorities into the clinical trials so that when we get the data, we can say that it applies equally," said Dr. Anthony Fauci, director of the National Institute of Allergy and Infectious Diseases.

Many researchers point to a higher level of mistrust and skepticism among African Americans toward a vaccine after centuries of systemic racism in American health care.

Most glaringly is the Tuskegee syphilis study which began in 1932 and lasted four decades, in which the U.S. government withheld medical treatment from hundreds of Black men who had syphilis as part of an experiment, even after a successful treatment had already been identified.

Earlier this week, Governor Gavin Newsom unveiled a statewide scientific safety review work group of medical and scientific experts who have been charged with verifying a COVID-19 vaccine is safe and effective before its distributed here in California.

"I am optimistic that we are going to have a vaccine that will work and I don't want people to be afraid to get it," said Dr. Mark Sawyer, a pediatricians at Rady Children's Hospital, who is part of that group.

"If you look at the history of vaccination, any new vaccine that's been rolled out and  recommended for the whole community to get has been a success," Sawyer added. 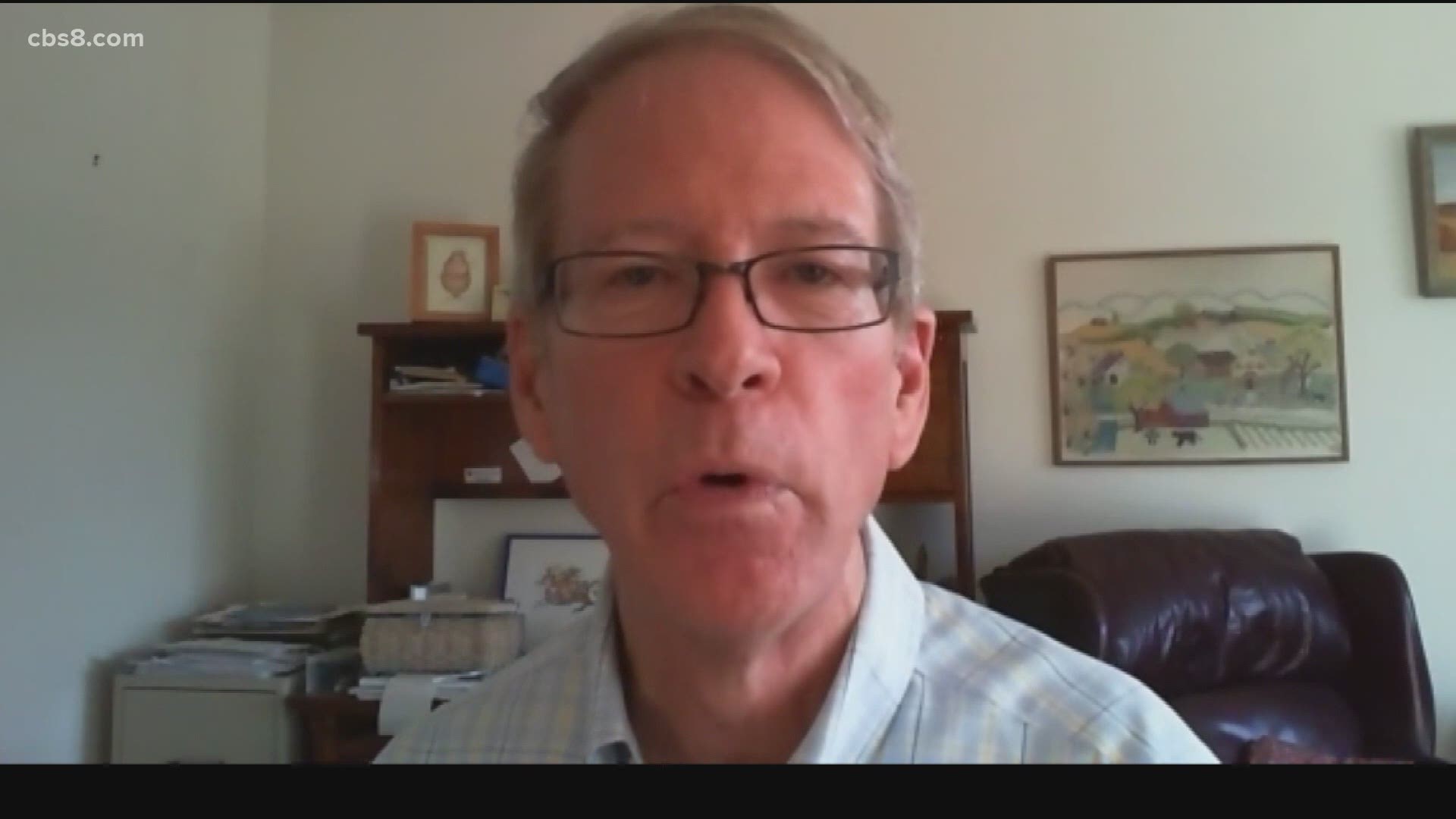