The city made the announcement as they prepare for what health officials are describing as a storm on the horizon with the COVID-19 pandemic. 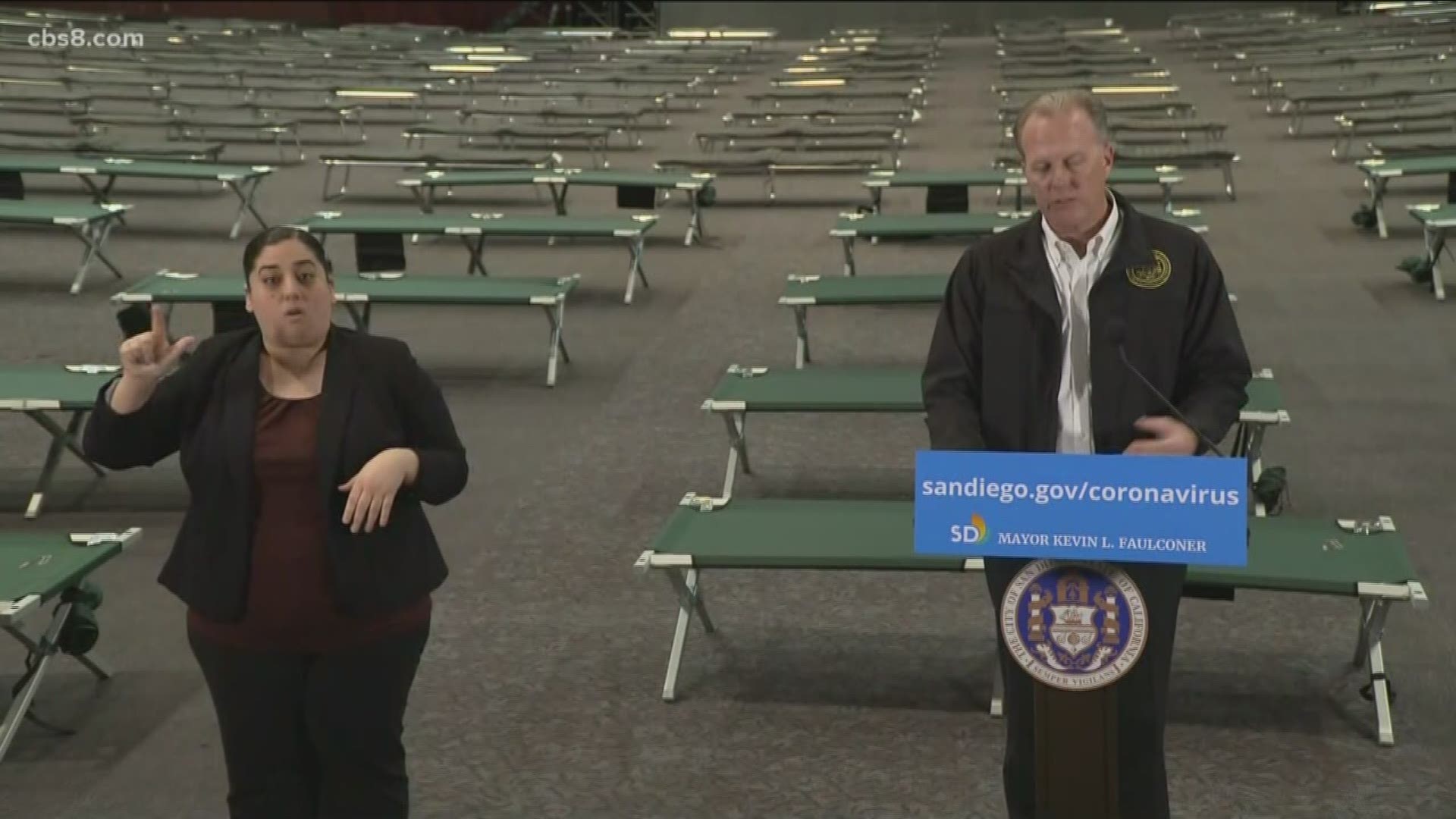 SAN DIEGO — The city of San Diego announced Monday the entirety of Golden Hall and parts of the Convention Center will be converted to homeless shelters with hundreds of beds as the city rushes to prepare for what health officials are describing as a storm on the horizon with the COVID-19 pandemic.

"Homeless shelter staffing levels have been dropping, some by 30- 50%," he said. "This will give us more shelter space to meet social distancing requirements. We can spread out shelter beds and use staff more efficiently."

At a news conference at Golden Hall, speakers stood in front of 240 cots lined up before Golden Hall's stage.

"For countless San Diegans, this has been the site of naturalization ceremonies, allowing them to start their new lives," Faulconer said. "Now it will be a place where homeless San Diegans can receive services that might save their lives."

A family shelter already exists in Golden Hall, and those families will be moved to hotel rooms for the duration of the quarantine. Single women already in shelters will be transferred to the Golden Hall beds later this week, and the majority of the remainder of existing shelter populations will be moved to the convention center at a later date.

Before the convention center is opened to homeless San Diegans, "there's a lot of work to get it ready," Faulconer said. This includes adding showers and other amenities.

RELATED: VERIFY: Which disinfectants will work on the new coronavirus?

County Supervisor Nathan Fletcher announced that the county has secured 1,954 hotel rooms for people showing coronavirus symptoms or for vulnerable populations. He said 200 of those will be used for people experiencing homelessness who are aging or have underlying health issues. The others will be reserved for those with symptoms of COVID-19 or those under investigation who cannot self-isolate. Examples include people in assisted- living homes and those living with people with underlying health conditions.

The officials said those rooms would be necessary.

"The worst of COVID-19 hasn't hit us yet," Faulconer said. "The storm is still out there."

San Diego County has installed 257 handwashing stations throughout the county, Fletcher said. Public health nurses are stationed in bridge shelters and teams have passed out 590 hygiene kits to those experiencing homelessness, with another 1,000 kits being assembled today.

Of that funding, $7.13 million is earmarked for San Diego County directly for sheltering the homeless through the city, county and the Regional Task Force on the Homeless.

"Another $43 million from last year's budget should go out soon," Atkins said of an additional amount the state passed in its annual budget for San Diego's homeless housing crisis.

The city does not yet have a confirmed case of COVID-19 in the homeless population, but Faulconer said tests would continue to try to mitigate the spread of the illness.