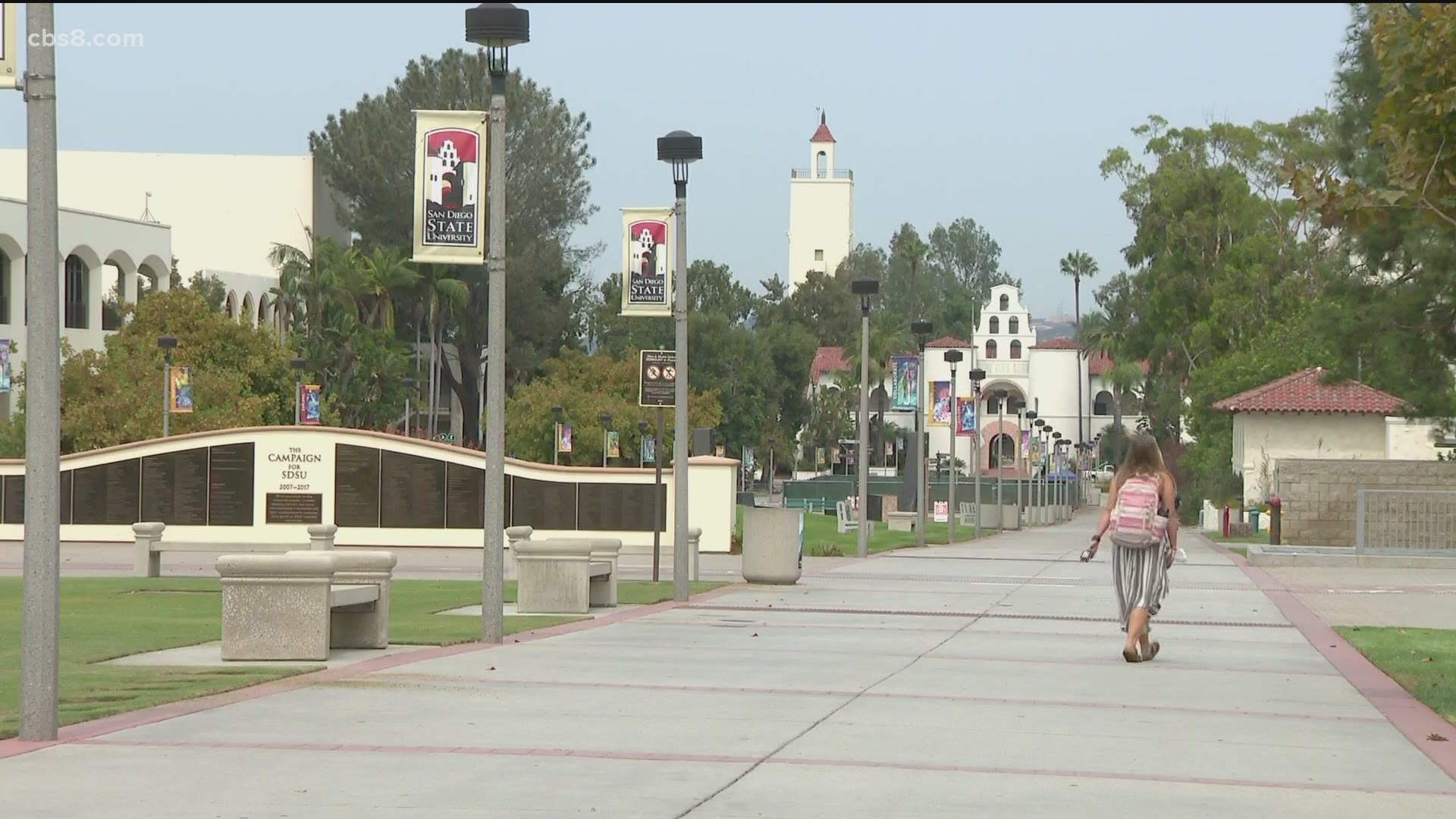 SAN DIEGO — On Tuesday, San Diego County's coronavirus case rate climbed to 7.9, placing many local businesses in jeopardy of having to shut down once again.

SDSU's numbers are impacting the county's path toward the most restrictive "purple tier" and the moves county leaders are making to reverse this trend.

San Diego State officials stressed Tuesday that no COVID transmission has occurred so far in its classrooms or research facilities.

Even as it unveiled this new comprehensive testing program, some questioned whether this should have been put in place long before.

"It is easy to play Monday morning quarterback," said Luke Wood, SDSU's vice-president for student affairs. "The guidance has changed and thus our response has changed."

As part of that changed response, San Diego Stare is now requiring that all of its on-campus students be tested for coronavirus as part of a new surveillance testing program

As of Wednesday night, there have been 676 confirmed cases of COVID-19 among San Diego State students.

In the meantime, as the state released San Diego county's latest case rate of 7.9, County Public Health Officer Dr. Wilma Wooten made it clear that if San Diego State's numbers were taken out of the equation, the local case rate would only be 6.0.

"We would still be in the red tier," Dr. Wooten emphasized.

Dr. Wooten said that the county is already negotiating with Sacramento to have San Diego State's numbers excluded, which state leaders are considering.

"They are a community in and of themselves," noted County Supervisor Dianne Jacob. "And I think there's a really good argument to be made to exempt the numbers coming out of San Diego State and any of the other universities and colleges from all our numbers."

The Board of Supervisors later unanimously passed a resolution to formally request the state remove SDSU's numbers fro the case rate calculations.

Supervisor Nathan Fletcher, who supported the move, also sounded a word of caution.

"I don't want to create a false sense that somehow if we just take the San Diego State cases out, then magically everything is going to be OK," Fletcher said. "We have some broader issues with community spread."

Supervisor Jim Desmond had earlier proposed to reopen local businesses in defiance of state orders: an idea which never got off the ground.

"Businesses had nothing to do with this increase," Desmond said. "It was all on San Diego State, yet we continue to punish our businesses."

Supervisor Kristin Gaspar, who made Tuesday's successful motion, said in a statement that if San Diego were able to remove SDSU's numbers without jeopardizing business licenses, it will be a win for San Diego County, adding if this does not happen, "we will have no choice but to take more drastic action."

“Today’s motion by Supervisor Desmond was symbolic. It would not have changed a single thing for our local economy and instead would have put our businesses at increased risk of retribution from the State.

We have a major problem with the caseload at SDSU — a problem that threatens to shut down our economy completely for a third time. We are having productive conversations with the Governor’s office. If we can get relief from these impossible metrics, establish local control, and remove the SDSU cases without jeopardizing business licenses and CARES Act money, it will be a win for San Diego. I have given our staff one week to accomplish this and report back at a special meeting (this motion was unanimously supported). If this does not happen, we will have no choice but to take more drastic action.”