Serving hopeful meals to those in need during the holidays

Holiday meals in dining halls at local non-profits have changed to individual dinners. The need for those meals is even greater this year. 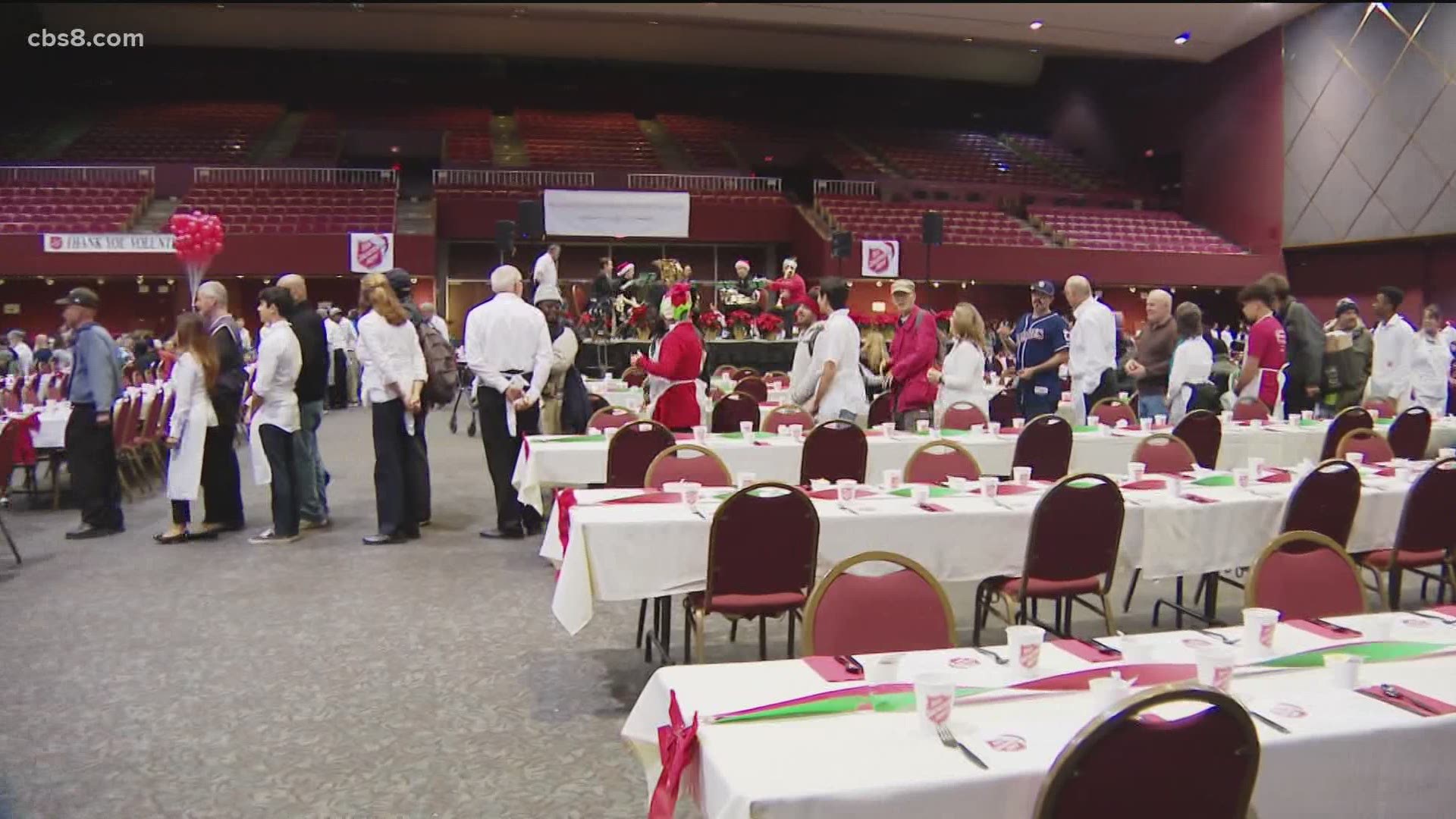 SAN DIEGO — As San Diego heads into the purple tier where more people are expected to lose their jobs, the need to feed families will grow.

Each year non-profits such as Father Joe’s Villages and The Salvation Army serve thousands of holiday meals inside a dining hall where people gathered around decorated tables.

This will be the first year in 36 years where 300 to 400 Salvation Army volunteers will not be serving Thanksgiving or Christmas meals to thousands inside Golden Hall because of COVID-19 precautions.

Instead, the Salvation Army will be serving individual packaged meals with all the fixings at four locations: Centre City in Downtown, Citadel in Clairemont Mesa and Red Shield Center in El Cajon and in Oceanside.

“Our theme for this year is ‘Rescue Christmas’ and so many things have gone by the wayside this year,” said Lt. Colonel, Lee Lescano with the Salvation Army San Diego.

Father Joe’s Villages is also turning to packaged Thanksgiving meals. Three hundred pounds of turkey and 200 pounds of potatoes have been donated.

Although people will not be able to congregate in a dining hall and visit with others, Deacon Jim Vargas says volunteers will be making it special.

“People will be coming in, they will be greeted with music,” said Vargas, Father Joe’s Villages CEO. “The way you garner that is the smiling, is how you hand out those meals. It's the conversation that you have.”

Some non-profits say despite the need growing people are giving. Vargas says Father Joe’s expanded its public lunch to breakfast and is also serving in Hillcrest and at 5th and Ash Street.

A similar story at The Salvation Army as more people face financial hardships during the pandemic.

“We've actually served up to 300 percent more in our family service office and pantry and that hasn't tapered down,” said Lescano.

Holiday campaigns such as Father Joe’s Villages Turkey Trot are going virtual and so is The Salvation Army Angel Tree.

Shoppers will notice fewer iconic red kettles in front of stores so you are encouraged to ring a bell online or through social media.

“This year we have already heard from retailers who just can't have us stand out front with COVID restrictions and certainly we want to make sure to protect the volunteers,” said Lescano.

Although many people are facing changes and challenges, giving back has not lost its message of making the holidays magical for those in need.

“While we have to change, we certainly don't want to lose the joy and hope the season brings to families,” said Lescano.

If you or someone you know has a food insecurity or if you would like to donate or volunteer, click here and be directed to 2-1-1.

Saturday November 14th, Support the Enlisted Project (STEP) is providing turkey dinners for enlisted and veteran families in crisis. It will be from 10 a.m. to 12:30 p.m. at 9915 Businesspark Avenue Suite A , San Diego, Ca 92131.