A Sharp Chula Vista nurse is off a ventilator but still on a life support machine. Despite his battle he is able to walk with help from nurses and doctors. 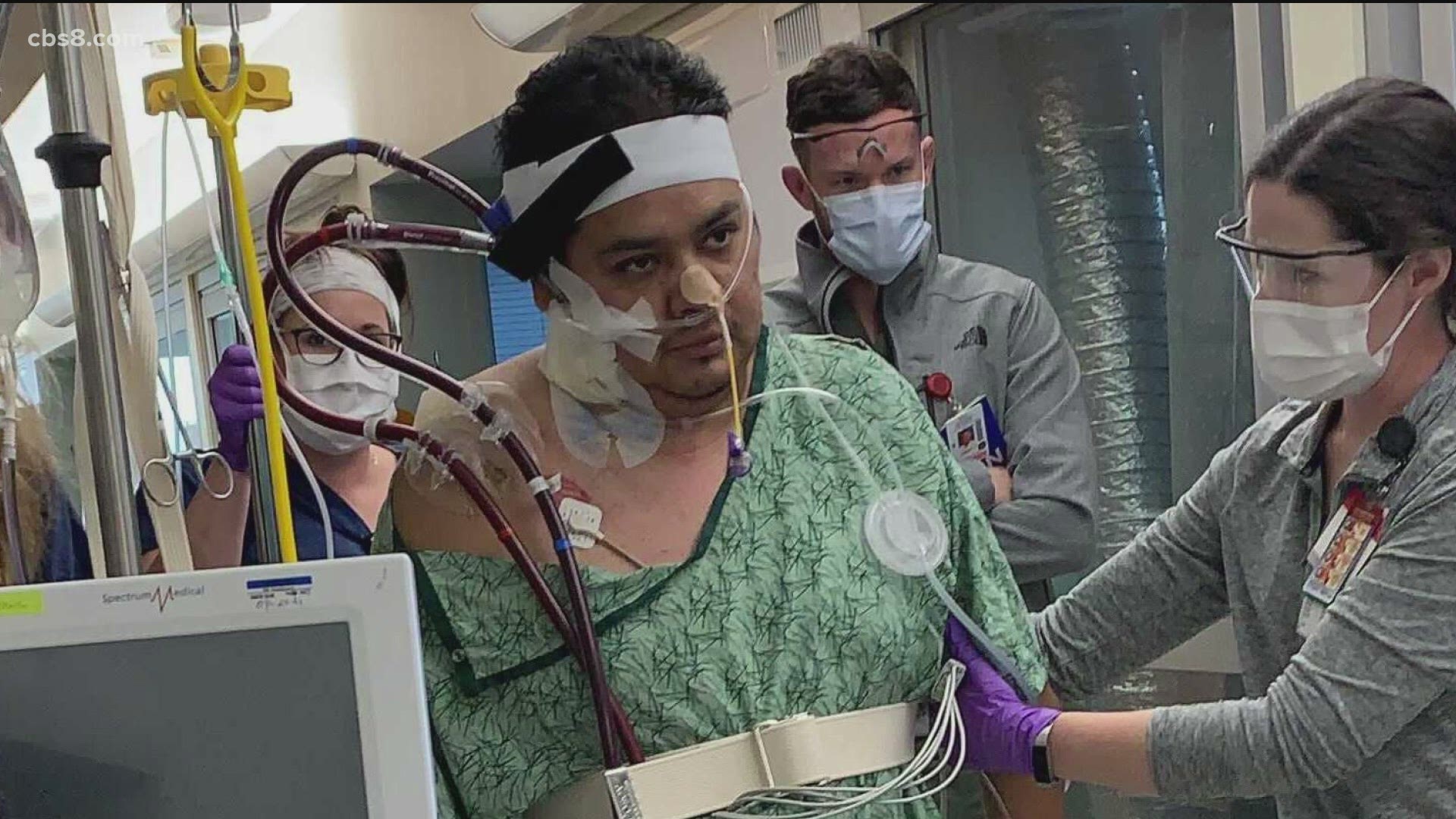 CHULA VISTA, Calif. — He went from treating patients to becoming one.

Sharp Chula Vista emergency room nurse, Daniel Plata, 38, has been hospitalized since January 11. Plata was on a ventilator for seven weeks and while the fight is not over, he is making progress. He is able to walk with help from nurses and doctors. “I'm the first to walk while on ECMO. It's a life support system so to be able to walk while still connected is pretty big,” said Plata.

He spoke to News 8 from his Sharp Memorial ICU bed while hooked up to ECMO, a machine that pumps and oxygenates blood outside of the body to allow a patient’s heart and lungs to rest. It’s usually the last resort in treating critically ill COVID-19 patients.

“I'm still not out of the woods yet,” said Plata.

For nearly a year Plata treated COVID patients in the South Bay.

“This virus is real. It can hit any of us,” says Plata.

On January 11, Plata was hospitalized at Sharp Memorial Hospital in Kearny Mesa, a few days later he was intubated and put in an induced coma. He didn't get off the ventilator until March 9.

Danny says he is on a breathing trial where he has been off the ECMO machine for 24 hours. "So we're trying out to see if my lungs can support me. And if that is the case, I'll be coming off of it pretty soon,” said Plata.

Danny says in the past two weeks he’s learned to walk again and gain muscle strength. “There are a lot of ups and downs. Some days we take a step forward and another step back. It's a painful road,” said Plata.

The father of two children has missed his son’s 11th birthday. Shortly before he was ill, he dropped his daughter off at college in Arizona where she started her freshman year. At age 18 she continues to drive back and forth to support her father and help her little brother.

In January, News 8 spoke to a co-worker of Danny’s about the outpouring of support and the GoFundMe that has now raised more than $57,000.

“It's been my support system that has gotten me to where I am right now,” said Plata. His family says it’s his determination, stubbornness and will to never give up that is helping him survive COVID. “I'm still fighting, we are not there but we are getting closer,” said Plata.

We asked when he is able to go home what is he looking forward to most.

“I need a shower. I just need some hot running water,” said Plata. “Then some good food and a beer," said Plata.

Danny says all the love and support is keeping his spirits up. To send your love you can visit his GoFundMe.