Newly reopened businesses such as bars and nail salons fear with so many not following health guidelines, county officials could force them to close. 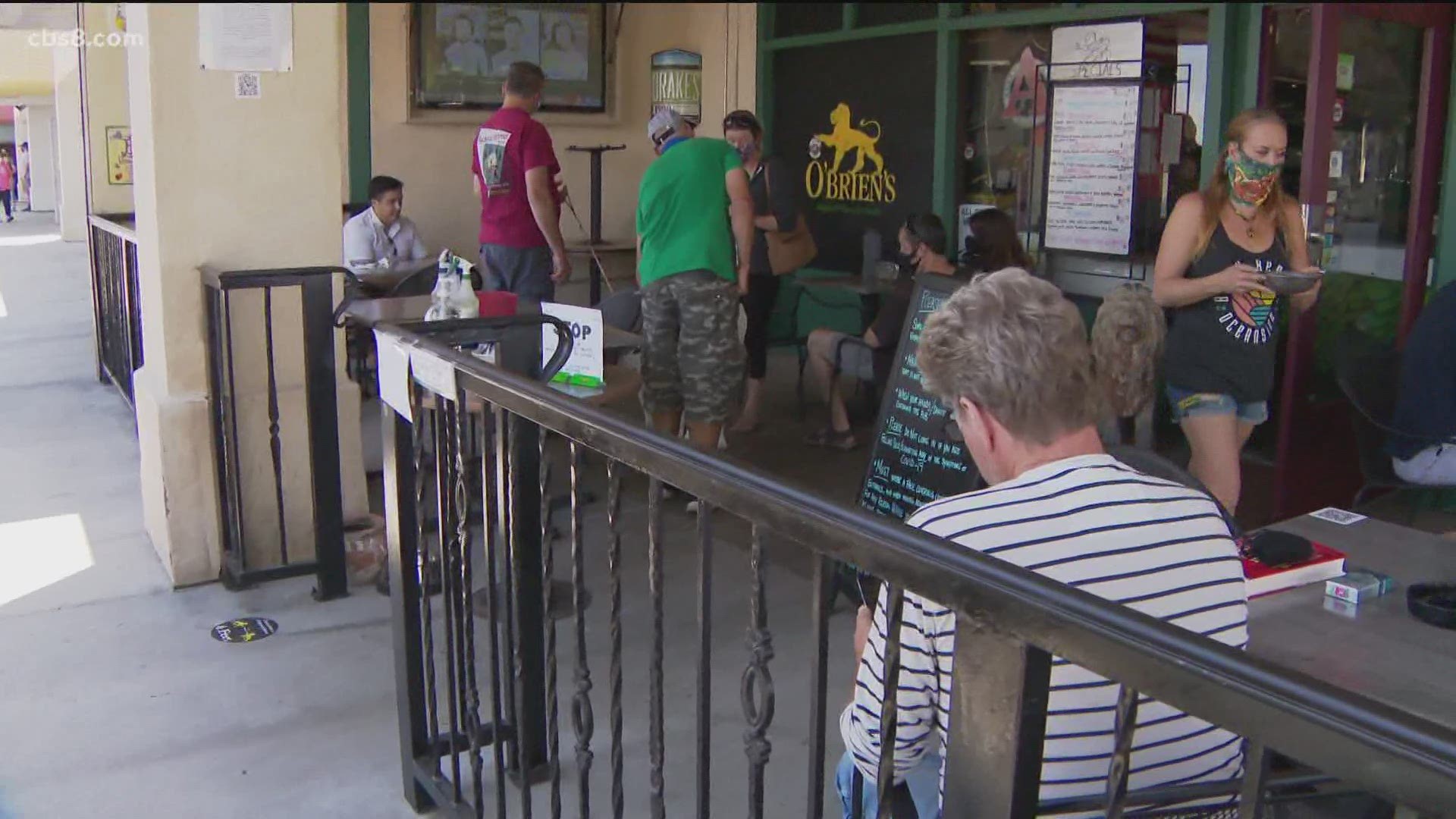 SAN DIEGO — Fearing that those not following the rules could ruin the progress that reopened businesses are making, Kimberly Cottrell, manager on duty at O'Brien's Irish Pub in Kearny Mesa, is trying to stay positive.

"I'm thinking it's looking real close to shutting us back down again, and it's very sad because everyone's been struggling, and we've been doing our part, and it's the people who are not who will ruin it for everyone,” said Cottrell, who’s worked at O’Brien’s nearly three years.

The pub on Convoy Street has a sanitizer and gloves station and keeps customers’ tables spread apart. The mask requirement is causing employees to have to police the patrons.

"I'm not a very abrupt or bossy type person, so to have to have to tell people 'hey, put your mask on' and yell at people to get the point across sometimes is not the role I like to play,” Cottrell said.

But concern is growing after San Diego County saw a surge in coronavirus cases consecutively.

Fletcher did a Facebook Live “Covid Update” on Friday while on quarantine at home after recently coming into contact with someone with coronavirus. He said he has been against a rush to reopen businesses.

Supervisor Jim Desmond of District 5 said in a statement in part:

“Over the last few weeks, we’ve successfully opened up more and more businesses. We knew there was going to be some speed bumps, but we are better off using a scalpel than a grenade to address issues as they occur. Our hospitalizations continue to remain low while dramatically increasing testing.”

Fletcher said in his video that a recent chart on “percentage positive” results refutes that “more people are testing positive because more tests are being done."

"We are significantly above the rolling day average, this is a single high day for the entire coronavirus episode even though we had days where we did much more testing,” Fletcher said.

Desmond’s written statement continued with “we must continue to protect our most vulnerable by wearing masks and practicing social distance. With unemployment checks due to run out and a 16% unemployment rate, we must get people back to work safely.”

San Diego County Board of Supervisors Chairman Greg Cox said in a statement:

“We have seen an uptick in cases this past week. Some of that can be due to increased testing. But as we’ve eased restrictions, that has meant more people going out and exposing themselves to the virus. That’s why we have emphasized only going out for essential services and being careful when you do go out. As of right now, only one of the 13 triggers that could lead us to imposing new restrictions has been met. We don’t want to shut everything down again. We are trying to walk a tightrope in balancing the need to protect public health with the need to help restart the economy. But we are monitoring those triggers and will be poised to take further action if necessary.”

RELATED: Is it safe to form a COVID-19 'support bubble' with friends?