Healthcare workers must provide verification of their eligibility when arriving at the site. 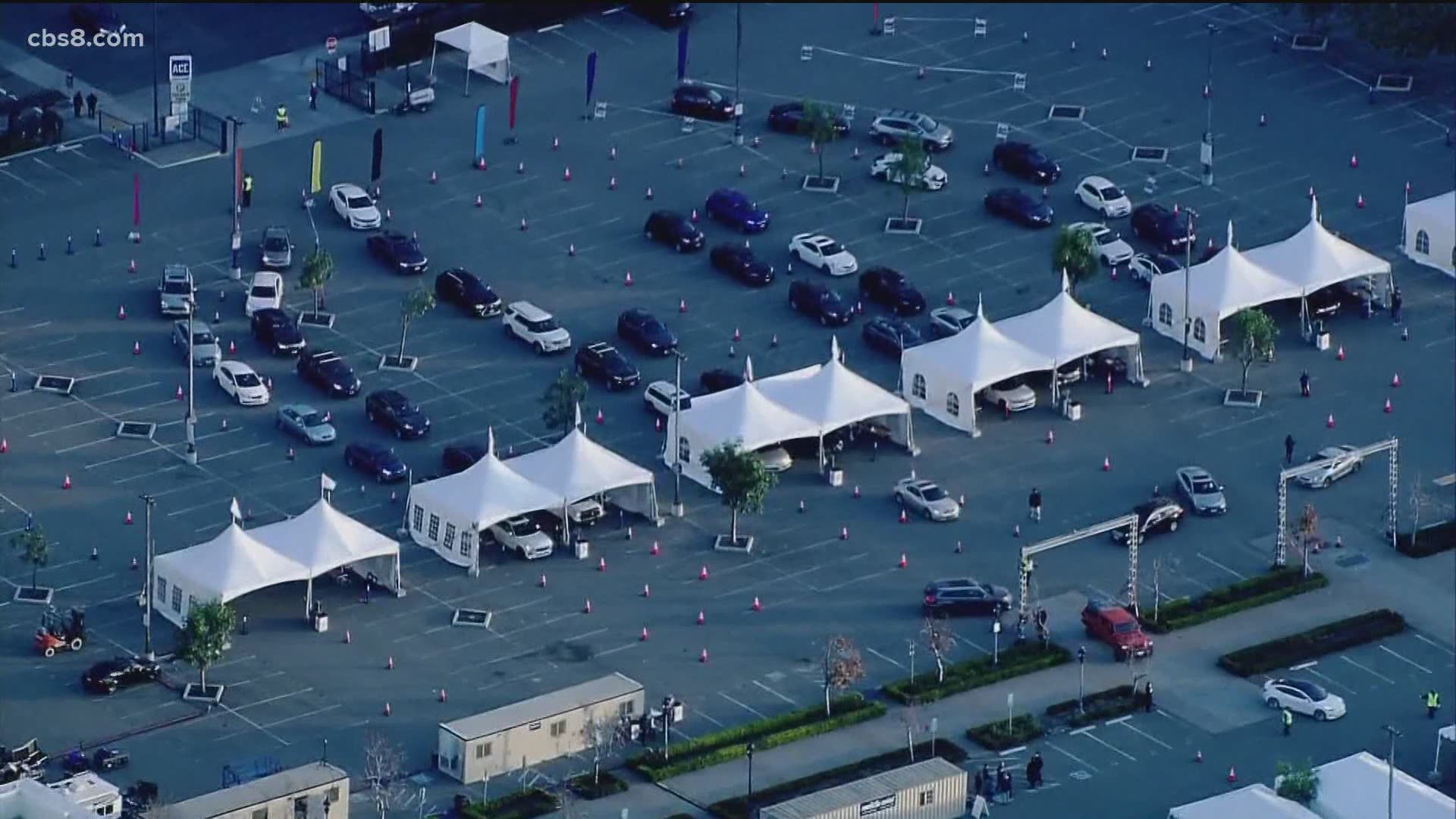 SAN DIEGO — A “super” vaccination site opened Monday in the East Village with the goal of vaccinating up to 5,000 healthcare workers a day by the end of the week. The site will operate by appointment only for the 500,000 San Diegans who qualify to receive the vaccine in Phase 1A.

This will be by far the largest vaccination site operating in the county and more are planned in the coming weeks.

“We will learn a lot of things [Monday] and we will apply those in real-time [Monday] and Tuesday and then really apply those lessons as we build out greater infrastructure around,” said Supervisor Nathan Fletcher, who added the next site will be in the South Bay, but a specific location has not yet been identified. 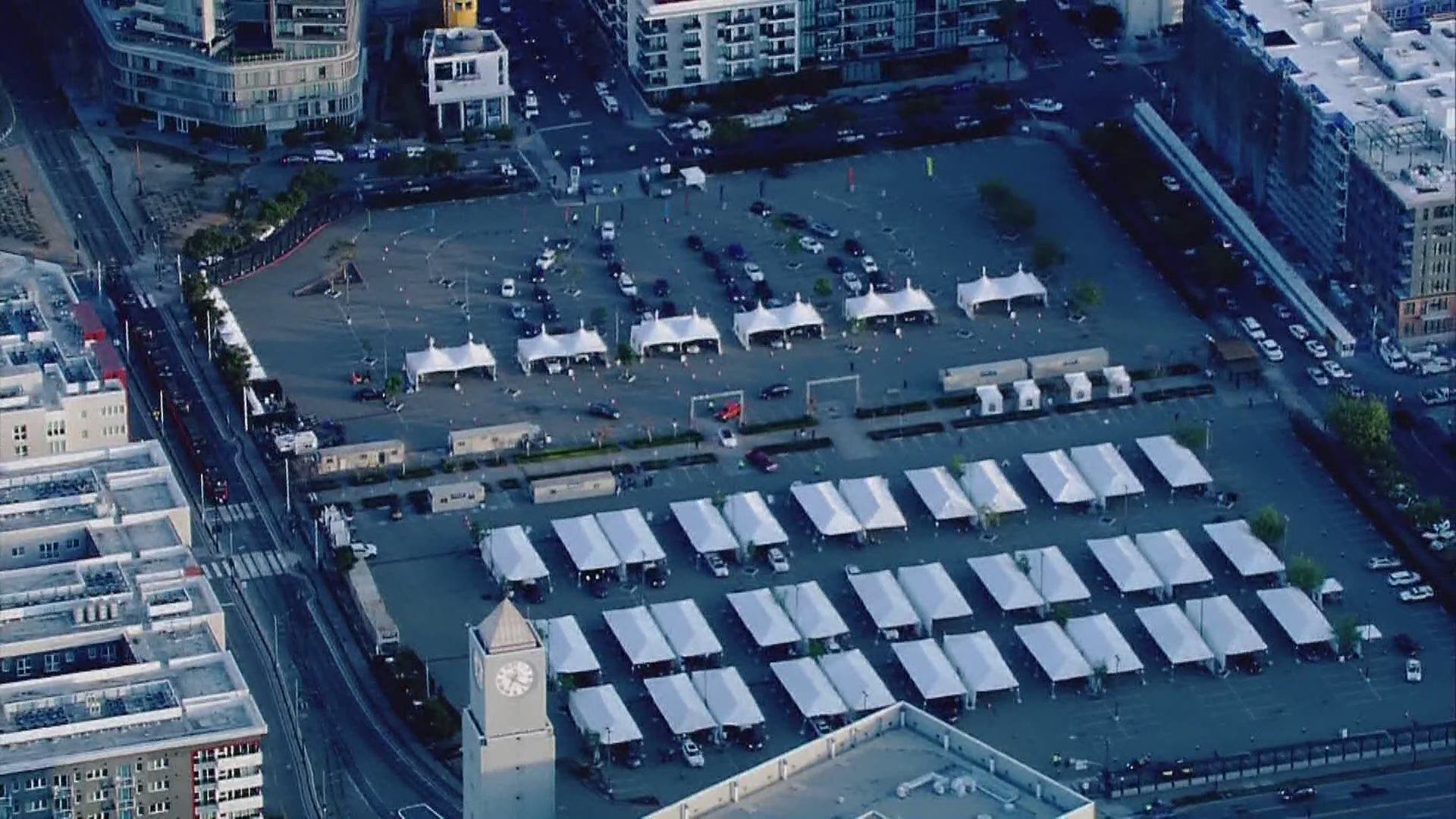 Discussions for the site began Tuesday when the county contacted U.C. San Diego Health for help. It eventually contacted the San Diego Padres, which agreed to let the county use Tailgate Park. The county credited the Padres for providing expertise in handling large crowds in developing the site.

The large vaccination effort represents a calculated risk for San Diego County. Health officials have been wary to vaccinate too many people to avoid not being able to fulfill needs for a second dose.

“I'm partly operating under the assumption that if we move faster and we use everything we have in our county, that we ought to be first in line to get more and so that requires us to take a leap of faith and doing things that other regions aren't doing,” said Fletcher. “Part of this is when we get it, we want to get it out. There is a possibility that we could stand up all this infrastructure and then run out of vaccines while we push for more, but we would rather have that problem than the opposite, where we're not getting it because we're not prepared.”

U.C. San Diego will staff the site with physicians, nurses, pharmacists and other staff members who are authorized to give injections. It will also store the vaccines in La Jolla and truck them to the site daily.

It streamlined a drive-through process that will be replicated elsewhere. However, with only 5,000 appointment slots a day, demand is far outpacing supply.

“As we open up more capacity, it fills really quickly. So be patient and keep coming back to [the website], but we really encourage those health care workers in Tier 1 to come here and get vaccinated if they can, as soon as possible. We'll try to get as much capacity as we can to make that happen,” said Patty Maysent, CEO of U.C. San Diego Health.

Fletcher called for people who are qualified to give vaccines, such as recent retirees, to join the San Diego Medical Reserve Corps, which may be tapped to give vaccinations at future sites.

Appointments at Tailgate Park are restricted to medical personnel and other members of Phase 1A. Workers must provide verification of their eligibility when arriving at the site.

“Invariably a week from now, there's going to be a story about someone who claimed to be something, and they had a piece of paper that said they were [eligible] and we let them through. And you know what? We're going to do everything we can to avoid that. But we want to move with the speed and urgency of getting people through,” said Fletcher.

The site is being fully funded by the county, although it is hoping to be reimbursed. Neither the state nor the federal government has provided funding for the vaccination efforts. Last month, local governments were left out of a coronavirus relief bill that was passed by Congress.

“None of this is free,” said San Diego Mayor Todd Gloria. “The message is simple. Washington, we need additional economic relief. We can have a lot more of these if we can have more than vials of the vaccine sent to us, but also the funding to actually get it into people’s arms.”

Who can get the vaccine at the supersite?

The site is restricted to only members of Phase 1A, such as healthcare workers, by appointment only.

I’m not a member of Phase 1A. When will I get the vaccine?

It will be at least a few weeks before we move into Phase 1B. The county said it is focusing on Phase 1A and the expansion into Phase 1B will be held up by the limited availability of the vaccine. 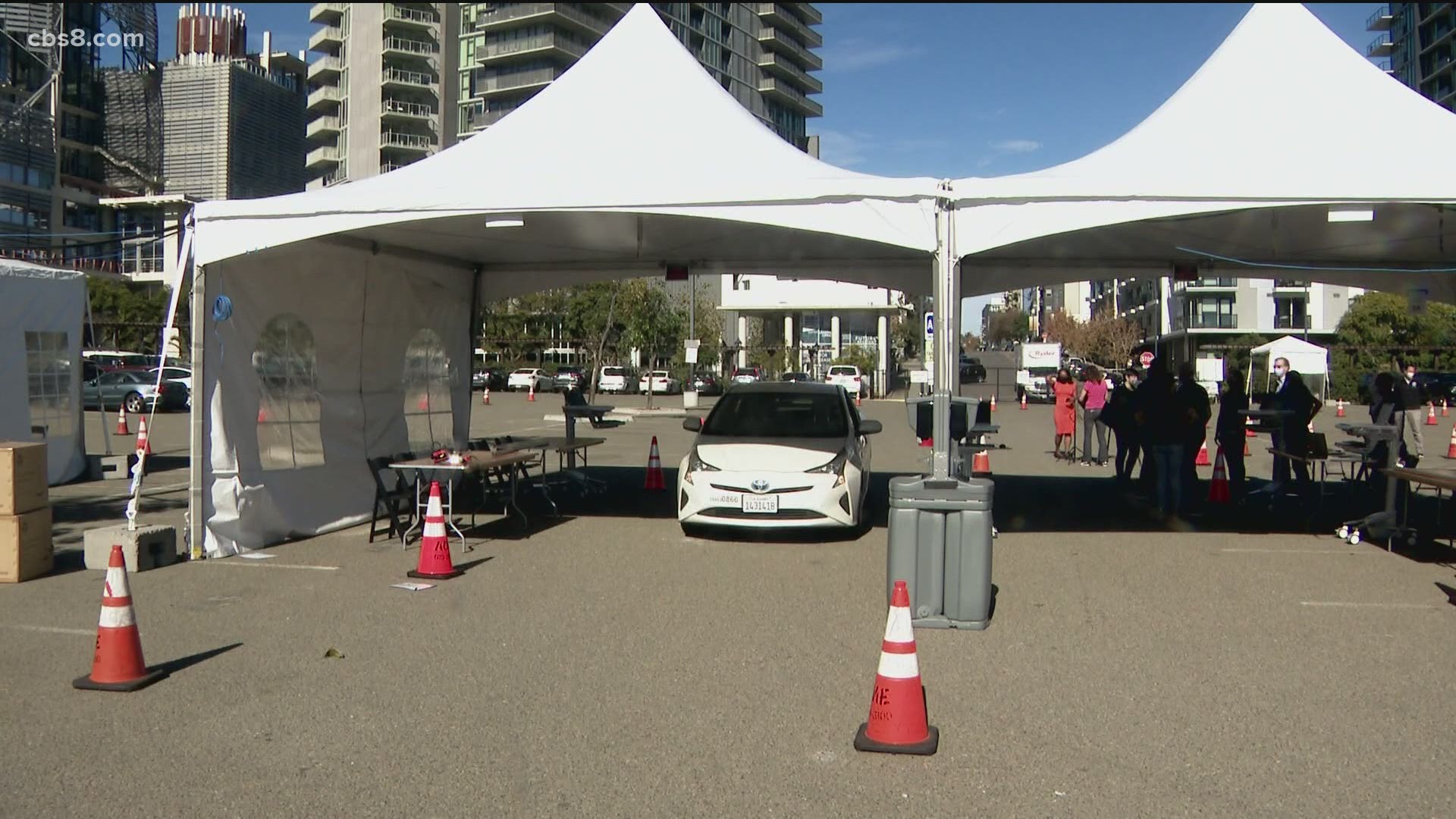 I am a member of Phase 1A. How can I make an appointment?

Visit here to learn about the appointment system. The site is open from 7 a.m. to 7 p.m.

How is the site organized? Walk me through what happens.

Those with appointments will enter the lot at 13th St and K St. Drivers will be directed to one of 12 lanes for check-in where their eligibility will be confirmed, and they will receive an appointment for a second dose. From there, drivers will go into a vaccination lane under one of 36 tents. Each has room for four cars.

A staff member will vaccinate cars 1 and 3 followed by 2 and 4.  Drivers must wait 15 minutes to confirm they are not suffering any adverse reactions. Once the time is up, a signal will be given and all cars in a lane depart at the same time onto Imperial Ave. It is expected to take about 30 minutes from start to finish.

Note, this is the original plan and is subject to change.

I have an appointment, but I don’t have a car. Can I still get vaccinated?

Yes, a tent is set up to accommodate pedestrians with an appointment or drivers with special needs.

Can my co-worker also come with me to get vaccinated?

You can carpool to the site, but everyone must have an individual appointment to receive the vaccine.

Is the supersite giving out the Pfizer or Moderna vaccine? What about the second dose?

Everyone will be given the Moderna vaccine. During check-in, recipients will get an appointment for a second dose 28 days later.

How are vaccines being tracked?

The county uses the San Diego Regional Immunization Registry to track vaccines. Data from the site will be submitted into the database and reported publicly at least once a week. The county is working on a dashboard that will be more regularly updated.

The database does not include vaccinations from the Department of Defense, Veteran’s Affairs, Kaiser Permanente, some tribal entities and prisons. Although the county is pushing for the military and VA to report data to the county.

“We will provide the most recent numbers,” said Fletcher. “We're continuing to work with our federal partners. I've talked to Congressman Scott Peters. I think VA and DOD need to share the total number of vaccinations they've done. They don't need to give us the names, but we need to know the totals and we will be able to report out how many we've done at the site.”