'Vax for the Win' | Teen from Vista receives $50,000, another San Diego winner is selected in 2nd round of lottery

At the event in Vista, Newsom presented a ceremonial $50,000 check to one of the winners from last week's drawing, 17-year-old Nancy Gutierrez. 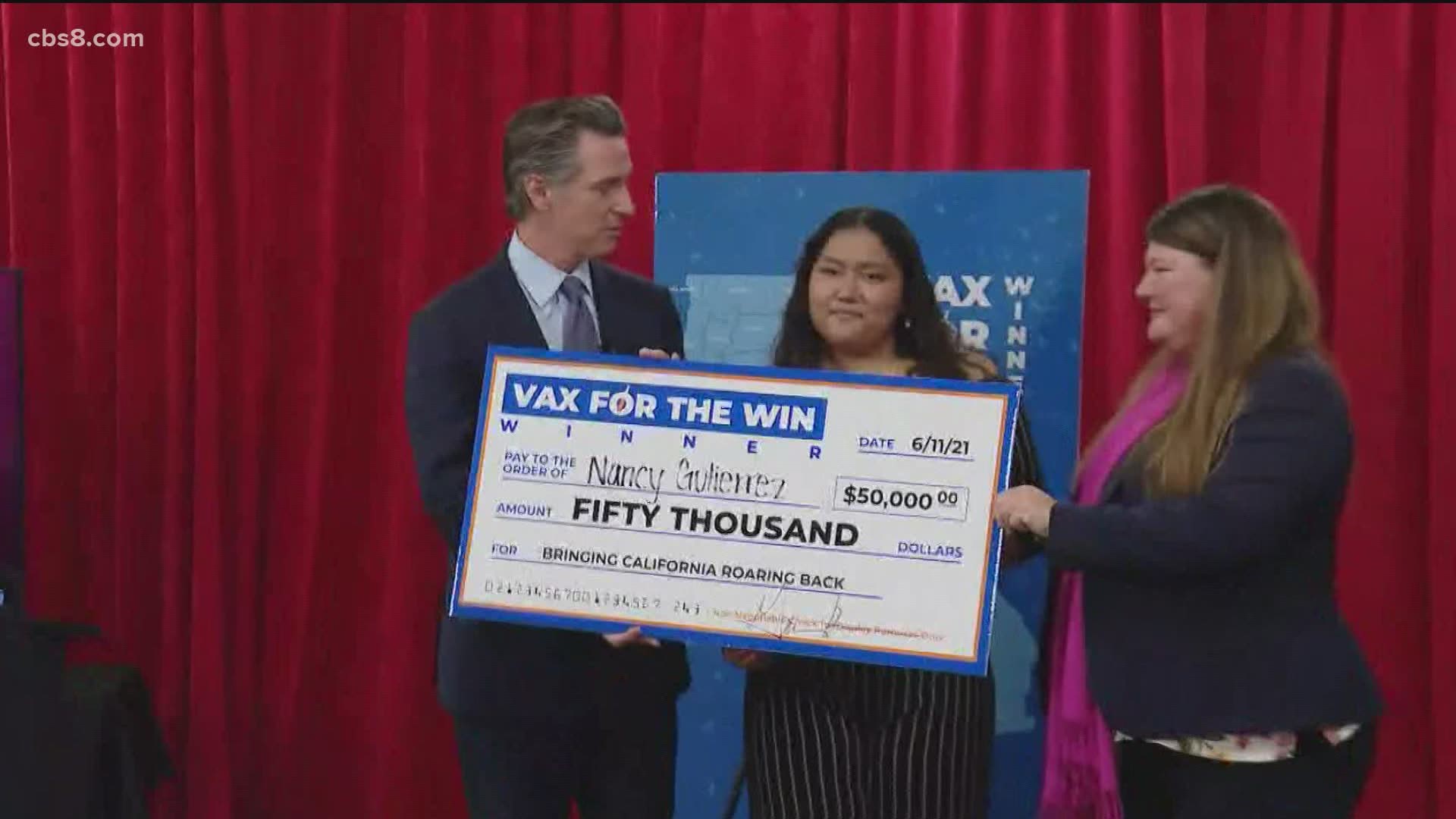 VISTA, Calif. — Fifteen more vaccinated California residents, including one from San Diego, were chosen by the state Friday to receive $50,000 prizes in a COVID-19 vaccine incentive program. Other people that were selected were three from Los Angeles County and one each from Orange and Riverside counties.

At the event in Vista, Gov. Newsom presented a ceremonial $50,000 check to one of the winners from last week's drawing, 17-year-old Nancy Gutierrez. Since she is under 18, her prize will actually be placed into a savings account until she turns 18.

"When I found out the vaccinations were available, I was really excited because I could have more liberty with going outside." said Nancy Gutierrez.

She recalled the moment when the phone rang last week.

"They called my mom and my mom came in and, 'Nancy, you won't believe it'."

They didn't believe it at first, thinking it was a prank.

"They're like, we'll call you back later with more details. Later they called, 'Okay, I think this is true and then this whole week, I think it's confirmed now," said Gutierrez.

The new winners join 15 who were chosen last week as part of the state's $116.5 million "Vax for the Win" incentive program announced by Gov. Gavin Newsom in hopes of luring people to get the COVID-19 shots.

The winners chosen Friday were not publicly identified, with recipients picked using a lottery-type system of numbered ping-pong balls, with the numbers corresponding with one of the state's 21.98 million eligible residents.

Winners will be contacted by the state in the coming days. Newsom, who oversaw the selection ceremony remotely from Vista, noted that two of the 15 winners chosen last week could not be reached, and two alternate winners were chosen from last week's finalists.

Of all eligible residents, the pool was randomly pared down to 200, then winnowed to 50. The final selection was done using a Bingo-style machine, with 50 numbered balls dropping into a twirling cylinder, from which the 15 winners were chosen.

Almost everyone in the state who has received at least one dose of COVID-19 vaccine is eligible for the drawing. However, to actually receive the money, winners will have to complete the vaccination protocol by receiving their second dose, unless they received the one-dose Johnson & Johnson vaccine.

Employees of the governor's office and various other state agencies were ineligible for the drawing, along with people who are incarcerated.

Under the state's "Vax for the Win" program, $50 gift or grocery cards are being awarded to 2 million people who get their first dose of vaccine, while supplies last.

On Tuesday, the day California lifts the bulk of its COVID-19 restrictions, the state will pick 10 winners who will receive $1.5 million each.

Newsom said the incentive program has been effective, noting that the state has seen a 13% week-over-week uptick in the number of vaccines administered -- making California one of only a handful of states to see an increase in vaccination rates.

Watch: California’s Blueprint for a Safer Economy comes to an end June 15