In March 2020, SDBFC’s owner and staff found themselves struggling as essential workers who could not find essential supplies. 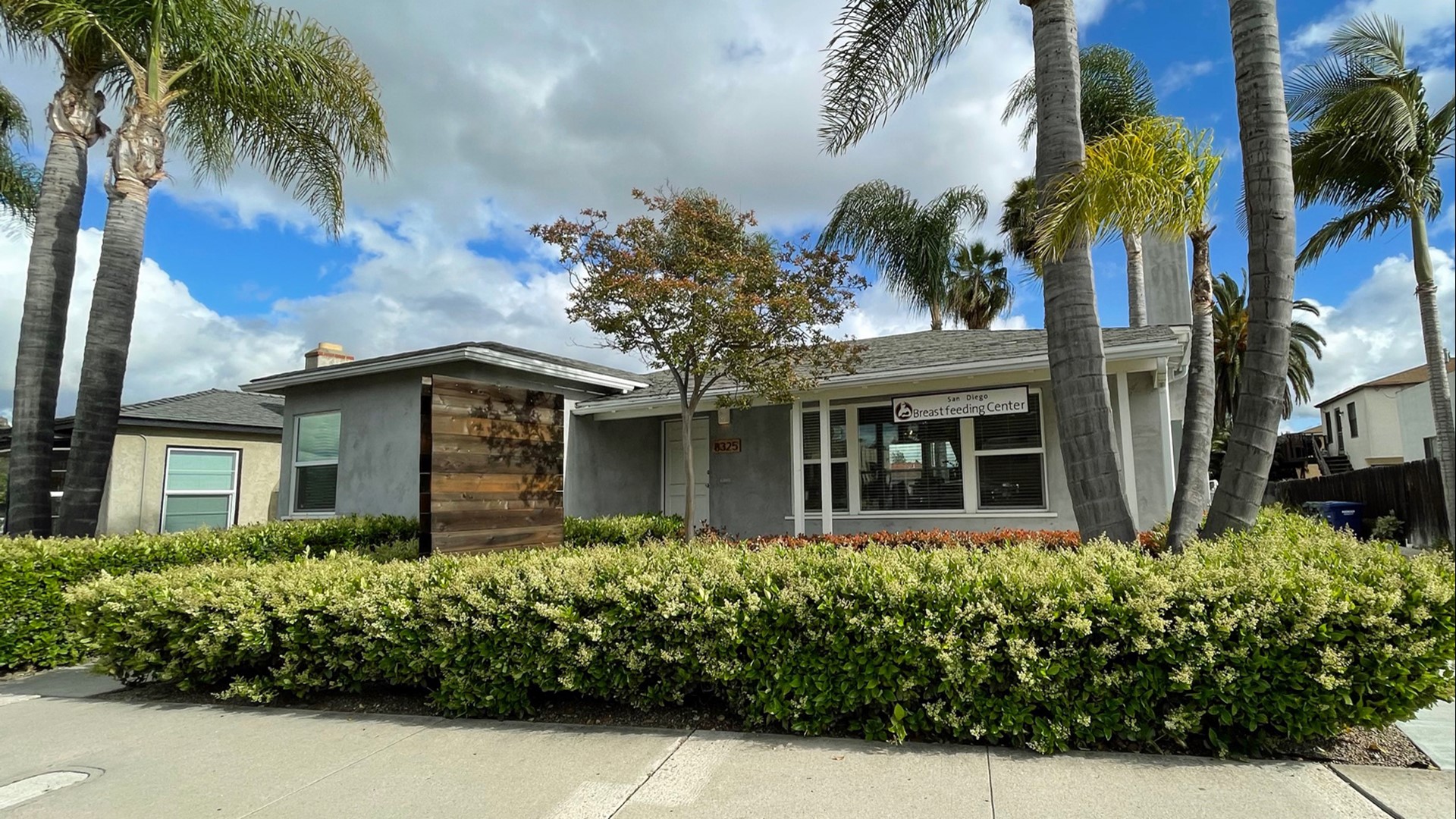 LA MESA, Calif. — Like many businesses, the San Diego Breastfeeding Center was hit with unique challenges the past year as they worked to provide care for their clients. As a resource intended to give intimate attention to parents and their babies, the center had to quickly adapt to a reality in which connecting with families looked a lot different in order to keep everyone involved safe.

As things start to reopen, the center – located in La Mesa - has begun extending its services to what they were pre-COVID and there are plans for new on-site offerings later this year.

Seeing the center in spring 2021, it’s hard to imagine it closed up and closed off to families. The warmth of the center, which was converted from a three-bedroom home, is inviting and cozy filled with natural light and charming décor.

But in March 2020, when much of the world was adjusting to the growing threat of the pandemic, SDBFC’s owner and staff found themselves struggling as essential workers who could not find essential supplies.

“I couldn’t get my hands on any PPE,” said the center’s founder Robin Kaplan. “So, we had gloves, but the masks were out, the cleaning supplies were out; and so, it actually forced us to close down for half of March, all of April and all of May.”

Consultations between expectant families or new parents and lactation consultants went virtual, as did the prenatal breastfeed/chestfeed classes taught by Kaplan. Support groups went on hold for the most part even when the center re-opened in May 2020, so although things weren’t completely shut down at the center, it’s hardly been business as usual for the past year.

“Otherwise, I don’t think we would have survived,” she said. “It just devastated our income. [The loans and rent forgiveness] allowed us to weather the storm and then once we were able to reopen again things have kind of fallen back into place.”

One of the missing pieces that Kaplan was eager to get back in place were support groups. Kaplan said she recognized her own feelings of lack of connection and observed the same in her teenage children; she said she couldn’t imagine what new parents were struggling with.

“Those support groups can sometimes be an amazing lifeline for these families, and we weren’t able to offer them,” she said.

Thankfully, support groups have recently resumed but are limited to five parents with their babies.

We are very excited to announce our weekly support group is back!!⁣ ⁣ Spend time with other families and babies. Learn...

Posted by San Diego Breastfeeding Center, LLC on Tuesday, May 4, 2021

Throughout the pandemic, Kaplan also saw the need for support went beyond guidance with breast and chestfeeding. With so much turmoil and the aforementioned feelings of isolation, families looked to their lactation consultants for emotional support and Kaplan saw an uptick in parents suffering from perinatal mood and anxiety disorders.

She also noticed families were engaged with the center for longer periods than previously. As many families became accustomed in 2020 to doctor and hospital visits that were less frequent with partners often precluded from attending, SDBFC was one place parents could seek support in a more holistic way with partners allowed to join.

“Rather than just one appointment and then they were done, we were seeing [families] for longer,” Kaplan said. “I think it was because – one – the extra support was needed but also it allowed their entire family to really get that support.”

One first-time mom who was able to utilize the center at the height of the pandemic, Caitlin Seal called the experience with SDBFC “wonderful.” Her baby Sadie was born in late March 2020, when support groups were canceled but she was able to connect with Kaplan through virtual consultations.

“[I was] exhausted, with a newborn at the start of a pandemic,” said Seal who prior to her maternity leave worked full time at Planned Parenthood.

Seal said she worked with Kaplan for about six to eight weeks through issues of clogged milk ducts when her newborn wasn't gaining as much weight as expected.

“The advice was straightforward and helpful. I felt super supported and listened to at a time when I was pretty hysterical,” said Seal. “It was one of the few nice things I had right after delivery.”

Credit: Caitlin Seal
Caitlin Seal and her little girl Sadie got support from SDBFC in March 2020

Another way SDBFC looks to support families is by being inclusive any way they can. Kaplan noted the center has worked to incorporate the term “chestfeeding”  the past few years to be inclusive of anyone who is “nurturing and feeding their baby at their chest” and recognize that not all nursing parents identify as female.

“We’ve actually had a little bit of push back,” she said. “I recognize that any time a new term is used that it may feel a little bit threatening to people who it doesn’t resonate with. But we just try to say, ‘it’s not taking over the word breastfeeding.’ It’s just added on so that way anyone who comes to our website, comes to our center, follows us on social media they have the ability to see that we are speaking to them.”

Also included in the center’s online presence and within the walls of the center itself, are depictions of breastfeeding parents from families of color.

“There’s really a lack of diverse nursing images out there,” Kaplan said.

She said there are more now than she saw in the past but stressed the importance of the center’s mission to increase that as a way to promote breastfeeding to a range of communities.

“It’s hard to really picture doing something when you don’t see other people who look like you doing it,” Kaplan said.

After starting the center, Kaplan also started the San Diego Breastfeeding Center Foundation - a nonprofit that is working to diversify what the lactation consultant community looks like in San Diego.

The foundation has also helped families of color and low-income families with access to lactation support.

Meanwhile, access for everyone is getting back on track at the center as the year progresses. And Kaplan hopes to extend the center’s services beyond lactation.

“It was a huge bummer because when we went into lockdown last year in March, we actually had a full schedule of classes,” said Kaplan. “My hope is that some time over this year – maybe in the fall – we'll really be able to pick that back up; so that way families, no matter how they’re feeding their babies, they are still able to have in-person resources to connect with other parents, learn a particular topic they’re looking for.”

To learn more about the San Diego Breastfeeding Center, take a class or book a consultation – which may be covered by your health insurance, click here.

WATCH: SDBFC Tips: What can I do to keep my milk supply up for as long as possible?